Portrait of Pope Francis as a rock star 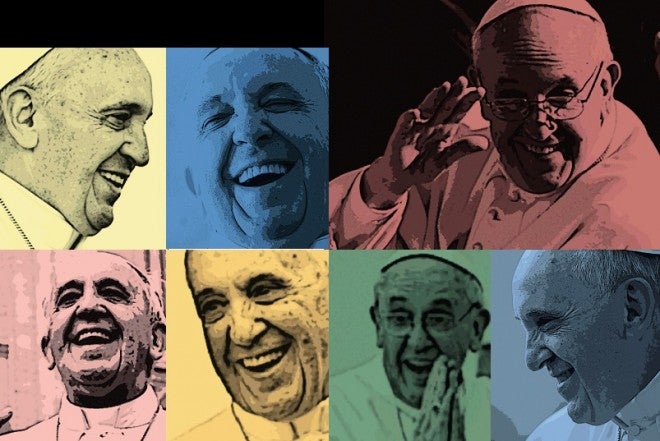 We love Pope Francis because he’s kind, generous and also undeniably cool. You can even say he’s a rock star. How? Check out the following reasons.

Rock stars trash hotel rooms or sneak out of their road managers’ watch so they could, say, spend some time with groupies. The Pope reportedly sneaks out of the Vatican at night—dressed as a regular priest—so he could hang with and feed the homeless.

He’s got a past

Some rock stars used to be drug dealers or sex addicts; the Pope used to be a bouncer at a bar in Buenos Aires.

Kurt Cobain opted for jeans, cardigans and flannel shirts instead of suits. The Pope bade goodbye to the velvet capes and the huge gold rings and all the elaborate details, and instead went for simplicity, tradition and symbolism.

Paul McCartney has one; Mick Jagger and Ozzy Osbourne, too. You know what, Pope Francis started his account in February 2012 and has almost 500 tweets and almost five million followers.

He is a cover star

Apart from gracing the cover of magazines like Life, and Time (back in 2013 as Person of the Year), he has also been featured on the cover of the online edition of The Advocate magazine (which is a gay title), Vanity Fair Italy, and, dig this, Rolling Stone. Oh, Esquire magazine also named him the Best Dressed Man of 2013.

He connects with the ‘fans’

Just like a true star who knows the importance of ever-supportive fans, the pope maintains an open communication line with the people. He uses a landline and calls those who’d sent him letters.

Just like celebrities, he’s accommodated selfie requests of fans. And basing on the photos, it looks like he sure knows what he’s doing—how to pose, and which angle is better (or maybe that’s just us).

He reaches out to ‘others’

A real rock star experiments and does not limit himself to just one genre. Pope Francis reaches out to other faiths. He’s reached out to Muslims, for example, expressing his hope “that Christians and Muslims engage in mutual respect, especially through the education of new generations.”

He’s got the moves

Not like Jagger, but moves, nevertheless. He used to dance the tango and even shared that, before being a priest, he had a girlfriend with whom he danced it.

He’ll get a biopic

Make that two biopics. Tina Turner, Elvis and Jim Morrison all had movies based on their life story. And now there are two being made on the Pope’s life. One stars Rodrigo de la Serna while the other has Dario Grandinetti.

He’s got a Harley

Well, he used to have one. He was given a motorcycle by Harley-Davidson to mark the company’s 110th anniversary, and he auctioned it, fetching $327,000.

The money was used to benefit a hostel and a soup kitchen in Rome. Sure, he didn’t ride it, but have you ever heard of a Pope who had a Harley?