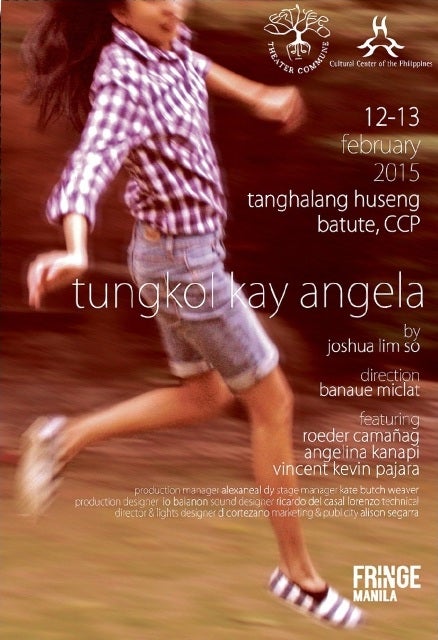 Young playwright Joshua Lim So’s “Tungkol kay Angela,” winner of the 1st Prize Palanca Award for full-length play in Filipino, and short-listed in the 23rd BBC International Playwriting Competition, will be presented by Destiyero Theater Commune on Feb. 12-13 in Tanghalang Huseng Batute, Cultural Center of the Philippines, as part of the first-ever Fringe Manila theater festival.

The play is set in the near future, when the country is once again under the control of a totalitarian regime. Pa and Ma, both belonging to the generation born after the People Power Revolution of 1986, live in a decrepit apartment. As Pa prepares dinner, Ma witnesses from the window a young man being captured and beaten up by the police. Fred, the young man, is able to escape, and the couple harbors him when he seeks refuge.

Hailed by the BBC Panel of Judges as “an extraordinary piece of writing… taut and filled with suspense… an original idea in which thought and consideration had been given in creating [the play],” and also “an emotional roller coaster of intrigue” with “compelling characters,” “Tungkol kay Angela” will be directed by Banaue Miclat and will star Roeder Camañag, Angelina Kanapi and Vincent Kevin Pajara.