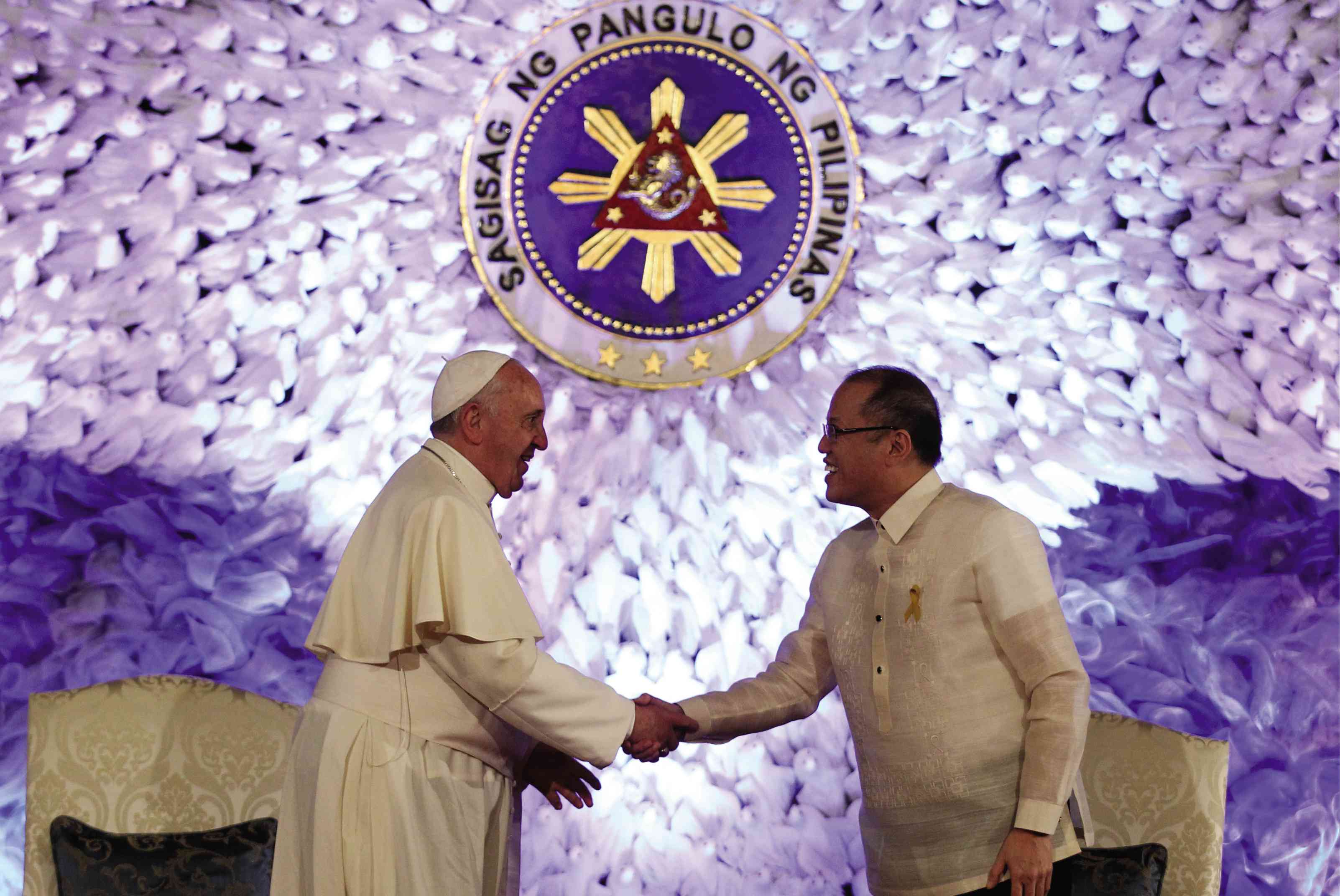 WALL OF PEACE A wall festooned with doves, the traditional symbol of peace, serves as an apt background for the meeting between Pope Francis and President Aquino on Friday morning in Malacañang. Filipinos, especially in areas devastated by Supertyphoon “Yolanda,” have expressed hopes that the papal visit would bring peace and healing in the country. MALACAÑANG PHOTO BUREAU

Aquino gift: Our Lady, Undoer of Knots made of ancient acacia

MANILA, Philippines—On behalf of the Filipino people, President Benigno Aquino III has gifted Pope Francis with a wood sculpture of Our Lady, the Undoer of Knots, to which the Pontiff is known to have a special devotion.

It is a gift rich in symbolism and relevance for the Filipino faithful, the President and the Pontiff himself—all children of God with knots to untie or undo in their daily lives.

Mr. Aquino presented the 32-inch-tall statue carved by Paete master carver Fred Baldemor during the general audience of senior government officials and the diplomatic corps with the Pontiff yesterday in Malacañang.

When the Pontiff saw the gift, a source said, he gave an appreciative smile. He became even more interested when informed that the image had been sculpted from a 100-year-old acacia tree in the Palace grounds. The tree was felled at the height of Typhoon “Glenda” last July.

Apparently, he saw its link to the typhoon victims whom he would visit today in Tacloban.

According to a website account by Hedwig Lewis, SJ, (http://joygift.tripod.com, posted in 2013) in the ’80s, the then Jesuit priest Jorge Mario Bergoglio, who would become Pope Francis, was doing his doctoral studies in theology in Freiburg, Germany, when he came across a painting in a church in Augsburg titled “Mary Untier of Knots.”

Taken by its symbolism, he took home to Argentina postcards of the image. The account continues: “He used to enclose copies in every letter he sent out. An Argentinian artist-friend of his made an oil-on-canvas miniature painting of the picture, which was hung in the chapel of Colegio del Salvador in Buenos Aires where Bergoglio was posted. The college staff were so attracted by it that they persuaded the local pastor to get a larger copy made… Eventually, devotion to Mary under the title ‘Untier of Knots’ spread across Latin America.”

It has always been known as the Pontiff’s special Marian devotion.

Baldemor sculpted the image from the 100-year-old acacia tree.

The sculpture is of Mary, her beautiful, almost “chinita” face finely chiseled—chiseled, literally, because Baldemor couldn’t use a heavier tool lest the wood chip; he even had to aid the chisel with his fingers in carving the eyes.

Her hands are holding a ribbon, half of which is knotted. Entwined around her feet is the serpent. She is standing on the crescent moon. On the base are children—a throwback to Baldemor’s signature image of the palaboy or street urchins.

The folds and the draping of Mary’s garb seem so soft and supple that the figure doesn’t seem to be made of hardy acacia, a type of wood that is a challenge to handle for any sculptor. Her garb billows behind her, like a shawl that frames her face.

After he was shown a painting of Our Lady the Undoer of Knots, Baldemor made a study, which would turn out to be different from the painting.

After the President approved it, Baldemor prepared to go to work. It was then that the President’s staff pointed out to him the acacia tree lying on the grounds, part of Typhoon Glenda’s debris. Baldemor said he could use the tree.

This Marian theology, it is said, goes back to the second century. In a blog, Rev. William Saunders wrote, “Perhaps the inspiration for this depiction of the Blessed Mother arises from the writing of St. Irenaeus, bishop of Lyons (martyred in 203) in his treatise ‘Adversus Haereses’ (Against Heresies): ‘Mary, the Virgin, is found to be obedient, saying, ‘Behold, O Lord, your handmaid. Be it done to me according to your word.’ Eve, however, was disobedient; and when yet a virgin, she did not obey… Having become disobedient, (Eve) was made the cause of death for herself and for the whole human race; so also Mary, betrothed to a man but nevertheless still a virgin, being obedient, was made the cause of salvation for herself and for the whole human race…Thus, the knot of Eve’s disobedience was loosed by the obedience of Mary. What the virgin Eve had bound in unbelief, the Virgin Mary loosed through faith.”

The blog quotes the Pontiff: “Mary, whose ‘yes’ opened the door for God to undo the knot of the ancient disobedience, is the Mother who patiently and lovingly brings us to God, so that he can untangle the knots of our soul by his fatherly mercy.”

The original Baroque painting of “Mary Untier of Knots” was by Johann George Melchior Schmidtner, dating back to 1700, and is found in the church of St. Peter am Perlach in Augsburg, Germany. It is six feet in height.

The painting itself has an interesting provenance. A German nobleman in the 17th century, despondent that his wife wanted to divorce him, sought the counsel of a Jesuit and brought to the counselor his wedding ribbon. It was the wedding custom of that era to join the arms of the bride and groom with a ribbon.

The Jesuit counselor, the story goes, held the ribbon before the image of Our Lady of the Snows, as he untied its knots one by one.

Then the ribbon turned a dazzling white, according to Lewis’ website account, and this was interpreted as the answer to the nobleman’s   prayer. It was said that the divorce didn’t push through.

At the turn of the century, in 1700, the nobleman’s grandson had commissioned a painting inspired by the story of his grandfather. This image came to be venerated as Mary Untier of Knots.

Baldemor didn’t really hark back to these accounts to sculpt the image. He focused instead on how he could transform the fallen acacia tree into a Marian image.

In an interview with Inquirer, Baldemor, 71, recalled how a big challenge it was, because the first block he got had cracks inside. So he had to choose the outer portion of the acacia.

The statue was made from one solid block of acacia. Baldemor retained its grain and texture, instead of varnishing it.

The most challenging task was sculpting the face: “I couldn’t control it. I had a hard time with the face.”

For instance, he didn’t want the cheeks and the lips to have the dark grain, and the eyes, initially, weren’t looking down at the knots. “Patience,” he said. He didn’t use a mallet to avoid chipping the face, and instead used a chisel and his fingers delicately.

His wife Stella, his main critic, noted that the Virgin wasn’t smiling, so again, Baldemor had to work on that.

Baldemor recalled how he would pray the “Hail Mary” each time before starting work on the image. Apparently a pious man, he has a panata (a vow) to draw the face of Christ every Friday.

He made a 6-foot-tall bronze sculpture of San Lorenzo Ruiz which he donated to St. Patrick’s Cathedral in New York.

He also donated this statue of Mary the Undoer of Knots.

Considered the foremost master carver and figurative sculptor in the country, Baldemor has worked with various materials, from ivory (before its use was banned), alabaster to jade and marble. His works are found in the homes of the country’s top collectors such as the Camposes, the Zobels, the Cojuangcos, as well as Japanese collectors.

The Marian figure is encased in a wood box crafted by leading wood craftsman and antique dealer Omeng Esguerra.

Indeed the Filipino’s sendoff gift to the Pontiff bears both the people’s faith and artistry.