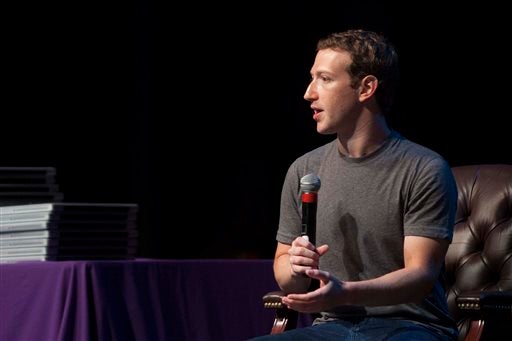 FILE - In a Thursday, Sept. 18, 2014 file photo, Facebook CEO Mark Zuckerberg speaks to students during an special assembly at Sequoia High School in Redwood City, Calif. The Facebook founder and CEO announced on his page recently that he has vowed to read a book every other week in 2015, with an emphasis on learning about different beliefs and cultures. Zuckerberg created a "Year in Book" page and urged his friends to join him in the project. As of Sunday afternoon, it had more than 89,000 likes. (AP Photo/Alex Washburn, File)

NEW YORK— Mark Zuckerberg has made his next book club pick, a release he considers especially timely after the recent terrorist attacks in Paris.

The Facebook CEO announced Saturday he would take on Steven Pinker’s “The Better Angels of Our Nature,” a widely discussed and occasionally criticized 2011 book that contends violence has decreased in modern times and the world has become more humane. Zuckerberg posted the news on his Facebook page and on a community page he set up for his club, A Year of Books.

“Recent events might make it seem like violence and terrorism are more common than ever, so it’s worth understanding that all violence — even terrorism — is actually decreasing over time. If we understand how we are achieving this, we can continue our path towards peace,” Zuckerberg wrote. “A few people I trust have told me this is the best book they’ve ever read.”

Among the book’s admirers is Microsoft founder Bill Gates, who has called it his “favorite book of the last decade” and “a long but profound look at the reduction in violence and discrimination over time.”

Two weeks ago, Zuckerberg declared he would read a new book every other week in 2015, and he invited his millions of Facebook friends to join him and participate in an online discussion. His first choice, Moises Naim’s “The End of Power,” quickly became a best-seller on Amazon.com and elsewhere. But only 162 comments appear for last week’s book club chat held on the community page, which has more than 260,000 likes.

Pinker, 60, is a leading psychologist, linguist and cognitive scientist who teaches at Harvard University and has written several popular books, two of which, “The Blank Slate” and “How the Mind Works,” were finalists for the Pulitzer Prize.

“The Better Angels” is indeed long, more than 800 pages, so Zuckerberg is already fine-tuning his promise for a book every two weeks. He wrote that he’ll need a month to finish “The Better Angels,” but will recommend a shorter work in two weeks that can be read at the same time.