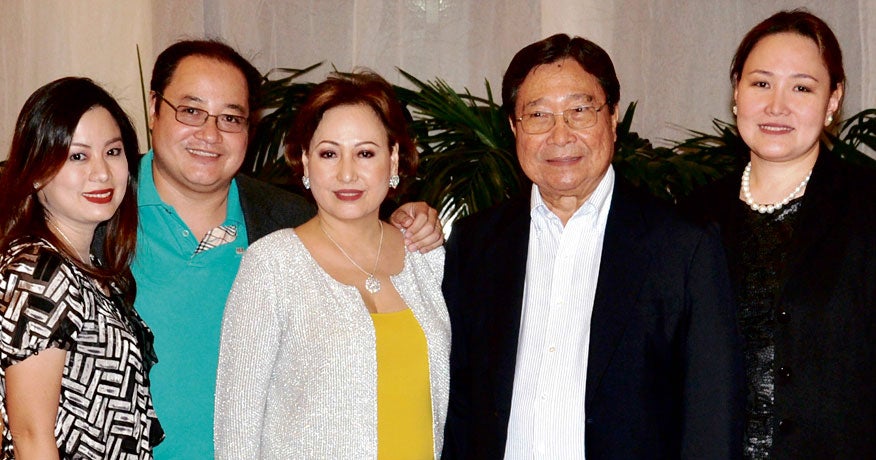 A birthday party that raised money for charity

Tessie Amparo remains attractive and vivacious, a top mover and shaker who cares a lot for charity projects.

When she turned 74 (there, I spilled the beans) with a party at the Turf Room of Manila Polo Club, Tessie said: “There are so many worthy causes, but there never seems to be enough funding to help each one of them. Fact is, fund-raising is more difficult now… as people have been continuously giving to victims of past calamities… Sadly a new wave of problems comes in… and donors find themselves having to refuse out of necessity…”

She requested that, in lieu of gifts, her guests donate to either the Catholic Women’s Club (CWC) or Inner Wheel Club of Manila (IWCM) any amount they feel comfortable parting with, as she believes that every little bit can help save lives.

Guests included her close friends, family, women from the CWC and IWCM, and others who share her passion for worthy causes.

The affair opened with a thanksgiving Mass and “The Lord’s Prayer” sung by Fame Flores and Jack Salud.

Seen enjoying themselves and gladly handing out their donations were my palangga and guests of honor Dr. Elenita Binay and former Sen. Loi Ejercito.

When Tessie celebrates or holds a charity affair, it’s “all the way or no way,” she said, laughing.

Cheers to you, dahling!

An SM event always turns out successful with its brilliant senior vice president for marketing Millie Dizon behind it.

Proof is the launch of the first Manille store of Crate & Barrel at the Mega Fashion Hall in SM Megamall, a partnership with the SM Retail Group.

Crate & Barrel head of international visual merchandising April Young jetted to Manille for the opening, with director of construction John Moebes and other members of the team.

“In collaboration with our esteemed franchise partner, the SM Retail Group, we are bringing in the best of Crate & Barrel and creating an exciting new retail synergy in Manila,” said Crate & Barrel interim CEO Adrian Mitchell.

Crate & Barrel started in 1962 as a family business by Gordon and Carole Segal in Chicago, Illinois. The couple was inspired by the simple, well-designed, affordable products they had purchased on their honeymoon in Europe. Working directly with European ateliers and factories to import their products, Crate & Barrel was among the first retailers to make modern tabletops and kitchenware affordable to American consumers. Well now you know, dahlings.

Today Crate & Barrel is owned by the Otto Group of Hamburg, Germany. The company has been operating stores in most major North American markets as well as international franchise locations in Dubai, Singapore and Mexico.

More Crate & Barrel stores are opening this year 2015 in Manille.

The upscale 71 Gramercy bar, lounge and restaurant was the venue of MediCard’s aviation-theme Brokers’ Appreciation Night to honor the people who have turned the HMO provider into a success.

The brokers received cash prizes, trophies and, in line with the “soaring high” theme, trips to various exciting tourist destinations in Asia and Europe.

The grand prize was a fabulous 7-day European tour package worth P600,000!

“Thank you for believing in our services, and you can rest assured that we are working toward further enhancing our system and processes to provide our customers with a better HMO experience,” MediCard SVP for sales and COO Atty. Juan Andres S. Montoya told the brokers.

MediCard also announced that it was investing in the expansion of its brokers team; the development of well-equipped, free-standing clinics; an integrated IT system; a user-friendly members’ Web portal; and an upgraded call management system.

Après all the speeches, everyone had a great time toasting to MediCard’s continued success.

Dedication and hard work will always be rewarded, n’est-ce pas?