I found Amorsolo light in an intimate house museum 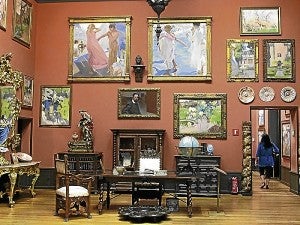 A few years ago, the Manila art crowd was abuzz over the multi-museum Amorsolo exhibits. On display was a whole range of works by one of our most famous National Artists.

The Lopez Museum featured the book illustrations of Don Fernando, particularly those in the Philippine Readers series. The Met had landscapes; Ayala focused on portraits. The GSIS show zeroed in on what were termed “values” which were supposed to be notable in the selected paintings, a problematic strategy at best.

Perhaps the most remarkable shows were those at National Museum and at Vargas Museum.

The National Museum show, curated by Dr. Patrick Flores, discussed how Amorsolo’s works were implicated in the project of imagining a Philippine nation. Among its most memorable sections was one that contained only three paintings:  a portrait of Mrs. Imelda Marcos by the Indonesian painter Basuki Abdullah, a mythological scene by the Spanish artist, Joaquin Sorolla, and a tiny head study of a “Dalagang Bukid” by Don Fernando.

Mrs. Marcos’ huge portrait illustrated how art works can help create a larger-than-life persona for their subjects, an important factor when crafting a national reputation.

The scene depicted in the Sorolla painting was drenched in the radiance that is said to have inspired Amorsolo himself.  In a sense, the “Dalagang Bukid” was positioned right at the intersection of the Marcos portrait and the Sorolla mythological canvas. For this small work was a fine example of how Amorsolo managed to forge a sense of nation through idealized images of farm workers set in the golden landscapes that would captivate generations of art collectors. 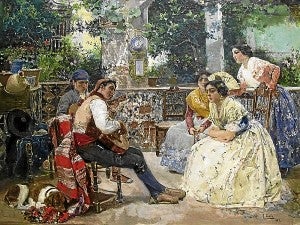 Thinking of how Sorolla was said to have influenced our very own Amorsolo and having extra time during a trip to Madrid, I decided to seek out the house museum of this well-loved Spanish artist.

It turned out that it was just a few blocks away from where I was staying. A short walk in a genteel neighborhood of elegant apartments and tree-lined streets and I was at the imposing doorway of the Museo Sorolla.

The aesthetic experience begins in the garden, which is supposed to be in the style of the south, akin to the parks and courtyards found in the opulent palaces of Granada and Seville.

One passes a tiled fountain with jets of water tracing silver arcs in the air, distilling a moment of solitude tinged with surprise. A word comes to mind for this leafy enclave: dappled. It is a foretaste of what awaits one inside the house.

Soon one is in the midst of chambers suffused with an orange that is at once fruit and sunset. I was a little worried that the color of the walls was so strong that the art works would be overpowered. I need not have been concerned.

Each painting was a square of light so dazzling that it almost seemed like one was peering through a window, beholding other worlds unfold. Everything felt fresh and new, yet strangely familiar. Perhaps my own realm had somehow been touched by this luminescence before. 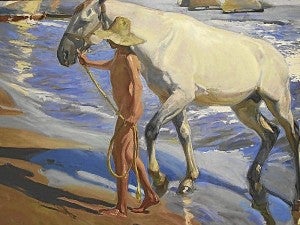 I saw large canvases of swimmers bathed in a glowing liquid which is both gossamer fabric and resplendent light. One feels heat and ice, one is stunned but also caressed.

There are country scenes with folk in local costumes.

There is a woman adrift in a sea of flowers and another asleep in a bed of what seems more like snow than linen.

Since this is the artist’s former home, an effort was made to preserve something of Sorolla’s lifestyle and decorative tastes. A feeling of intimacy arises as one surveys tablescapes and shelves arranged as if their owner had just stepped out for a coffee and would soon return.

From the front galleries, the visitor moves to a great room. Here the height of the ceiling and the fact that the walls are lined from top to bottom with huge works all add to a breath-taking experience. Somehow I begin to imagine music, notes floating in the air already redolent with laughter and the blurred edges that only candlelight as well as wine can bring.

A large painting of a woman in a long dress with leg-of-mutton sleeves is displayed on an easel. One cannot help but think of John Singer Sargent’s double portrait of a similarly attired Mrs. Isaac Newton Phelps Stokes posing with her husband. This makes sense because Sargent and Sorolla have been associated with each other— there was even a 2007 exhibit of the two in Paris. 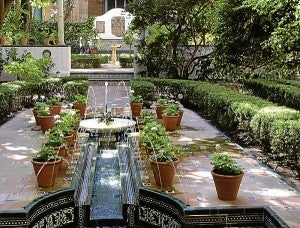 Perhaps it is the frank expression of the sitter in the Sorolla piece that reminds one of the confident Mrs. Stokes, upstaging her spouse who is relegated to the shadows. Perhaps it is nothing more than a matter of matching sleeves.

The next section is a dining room and what must have been the main vestibule of the original house. It is here that it dawns on me: many of the gracious Manila mansions that I have had the good fortune to see have a similar ambiance. I am standing at the foot of the staircase of a home in Madrid and yet I am transported back to the foyer of the grand country estate of the Escuderos or even the white flowing spaces of the home of Don Luis Araneta. I feel quite certain that the well-traveled owners of these lovely residences had been inspired with interiors just like what I was now viewing.

It was, in fact, almost impossible that they had failed to visit this very house. One gets an idea then, no matter how fleeting, of what Don Luis and Doña Rosario may have been trying to recreate in their faraway tropical milieu.

And what of Don Fernando?

Yes, he is certainly here too. One can see him in a drop of sunshine on water, the sheen of a grassy carpet, the translucence of a petal. 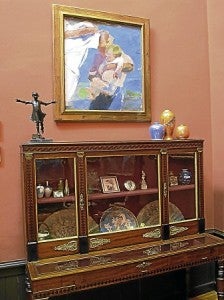 He is here in the turn of a head or in a quiet smile, in a hand that is held just so. Visiting Spain in 1916, Amorsolo became acquainted with the works of Sorolla. Though he may never have set foot in this house since it opened as a museum only in 1932, it is known that the Spanish painter made quite an impression on Don Fernando.

Sorolla had actually made his mark with canvases that excoriated the harsh social realities of Spain in the early 20th century. Yet he would eventually turn his back on the realist genre, preferring the sun-kissed scenes which he is now known for. Perhaps he had come to believe that the planet was already so full of pain. He wanted his art to be a balm and not one more burden.

So with Amorsolo.  Seeing paintings by Sorolla like the ones glistening on these walls, Don Fernando may have been inspired to portray his own little country in the midst of splendor.

Amorsolo has been much-criticized for creating works that blinded his countrymates to the despair that was all around them. Yet, possibly, viewing the paintings of Sorolla, he may have been touched with the illumination which he made it his mission to share, clearing a bright path for others to follow.

The writer wishes to thank the Spanish Embassy for arranging his trip to Spain. Check out the Embassy website for the many activities taking place this month in celebration of Spain’s National Day.