A musical on Singapore’s founding and national journey–written by Filipinos | Lifestyle.INQ ❮ ❯ 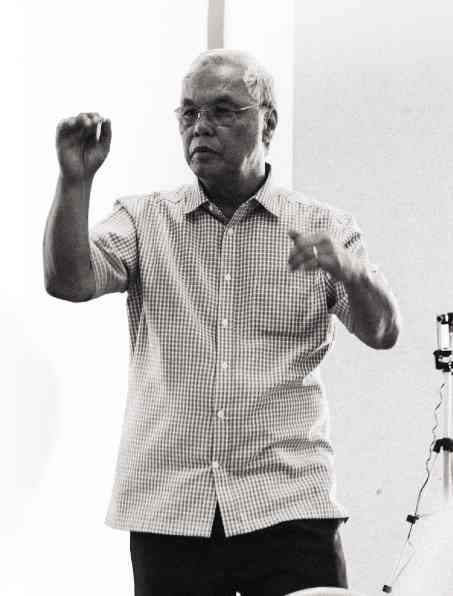 COMPOSER Ed Gatchalian. “I have been retired from corporate life since 2007 and I want to devote my life to my passion, which ismusic.”

After 18 months of research, 48 drafts of the libretto, and three years of intense creative collaboration, composer Ed Gatchalian of 4th Wall Theatre Company may finally be on the first step to achieving a lifelong dream of staging a musical on Broadway.

His first and most important launching pad, though, is Singapore. The title and the topic of his latest S$2-million production is about the arduous beginnings of the Lion City before it rose to become one of the most progressive countries in the world.

“Singapura” will open this May in Singapore’s historic, newly refurbished Capitol Theatre and run for 11 weeks. Theater mainstay Joel Trinidad wrote the libretto to the music of Gatchalian, who conceptualized the story and did the actual groundwork of interviewing elderly Singaporeans whose stories would serve as its backdrop.

Gatchalian and Trinidad have collaborated before in 4th Wall’s earlier musical hit, “Rivalry,” which portrayed the age-old basketball feud between the universities Ateneo de Manila and De La Salle with sharp wit, nostalgic humor and a resonating fondness.

It was also during one run of “Rivalry” that the seeds to “Singapura” were first planted. Two Singaporean businessmen in the audience were impressed and approached Gatchalian weeks later with the unusual proposal of doing a musical on Lee Kuan Yew, founder of modern Singapore. Gatchalian agreed after reading a couple of the leader’s memoirs. But his journey eventually led him to change the script’s focus from the strongman to the ordinary men and women who helped build Singapore to what it is today.

“I embarked on trips to Tokyo, Singapore, Kuala Lumpur and Hong Kong to interview people from ages 60 to 90 who had lived in Singapore from 1955 to 1965,” Gatchalian recalls. The year 1965 was the country’s turning point: The Federation of Malaysia had cut off ties with its former “sister nation” of Singapore, letting what was a small country with meager resources fend for its own.

Lee Kuan Yew had gone on national television, rallying his countrymen to move forward, and yet at the same time was transparent and honest to say that difficult times lay ahead.

“It was really bad then,” says Gatchalian. “Lee Kuan Yew was practically saying that though he did not exactly know how or where, the country has to go on. I interviewed the people who had lived then—British, Chinese, Malays; these are the grandparents and parents of Singaporeans today. And their stories proved to be more interesting; the story of the musical must be about the nameless and faceless heroes of the modern Singaporean economy. ‘Singapura’ takes place from 1955 to 1965, from the struggle to the uncertainty. We end not with success, but with determination.”

The plot revolves around a Singaporean family within a 10-year period. The violent deaths of four people in a bus incident in 1955 traumatizes many of its citizens, such that the main hero, a bus driver and family man, is tempted to move to another country. His daughter wants to stay and fight for a better life, yet she is equally torn by her British lover’s offer to return with him to the safer haven of the United Kingdom.

“You have racial riots, deaths, a love story interspersed with actual historical people,” says Trinidad. “The main point of the drama is trying to overcome strife to find a true home. Singapore was a mess in the 1950s—the people were poor, there were pollution and gang wars and crime was bad, but they got out of it.”

The production cast is composed of 35 Filipinos, 11 Singaporeans, an American and a Canadian. Pinoy actors play the family who is at the heart of the story: Julien Mendoza is the bus driver; Maybel Bangayan Ty is his wife who runs a coffee shop; and Marian Santiago is their daughter who transforms from a teenager to a journalist in that critical decade.

There has been criticism from certain quarters in Singapore on why Filipinos were producing and performing in a play about their history. Gatchalian, however, says many of these critics are won over after hearing the music and learning the story.

Trinidad echoes: “Singaporean consultants who had said that this—people from other country doing a musical on their history—could never happen take a look at the script and love it. Sometimes, you may need an outsider to show you the story to tell it more clearly. If you are too close to it, you might not be too objective.”

At the same time, he acknowledges his “biggest challenge—to make the Singaporeans own this musical. Make this story theirs. I wrote it in such a way that when a Singaporean sees this, he’ll say, ‘This is me.’”

The international pedigree of the musical goes beyond Asia. Directing “Singapura” is an American of Greek descent, Greg Ganakas, whose production of “Brigadoon” won the Connecticut Critics Circle Award for Outstanding Direction of a Musical. His other musical theater credits include “Ain’t Misbehaving” at the Dallas Theater Center; “God Lives in Glass” in New York City; and “Oklahoma!” in St. Paul.

Kevin Kern is the vocal and performance coach.

Gatchalian put his team together with an eye on a bigger map: a chance to stage a musical in Broadway or West End.

“The audience in those places will not recognize Katy de la Cruz or Jose Rizal, but they do know of Lee Kuan Yew or at least recognize the importance of Singapore,” he says.

Hiring Trinidad was a step toward that goal.

“Joel is very American in his thinking,” says Gatchalian. “Few people know that two of his plays have been performed off-Broadway. In my opinion, he is the best lyricist in Asia when it comes to being compatible with the melody structure. The flavor of my composition is American-influenced.”

This approach may very well have been the element that prompted the Singaporean businessmen to approach Gatchalian with their proposal, though the play’s subject was limited in scope. “You can change the names of the people and the universities in Rivalry,’ and it would still be universal in its appeal,” says Gatchalian.

The dream of putting up a play in the theater capitals of the world had been in his mind for decades. During his days in corporate advertising, the man who had written about 1,500 popular commercial jingles would re-charge by watching musicals in the United States or in the United Kingdom. But neither is the man a theater newbie; he was an original member of Repertory Philippines and the Philippine Educational Theater Association back in the 1960s.

Noel Trinidad, Joel’s father, is a good friend and an old classmate; from their elementary days to high school at the Ateneo, they would appear in theatrical productions.

Gatchalian admits he is getting back to his first love. “I have been retired from corporate life since 2007 and I want to devote my life to my passion, which is music,” he says.

It is a homecoming of sorts, and one that resonates with the themes in his latest musical.

He says, “‘Singapura’ talks about home, that it is not just a place but where your loved ones are. It’s about getting to know your identity.”