The VAMP chronicles: What it takes to jet-set with the Pope | Inquirer Lifestyle ❮ ❯ 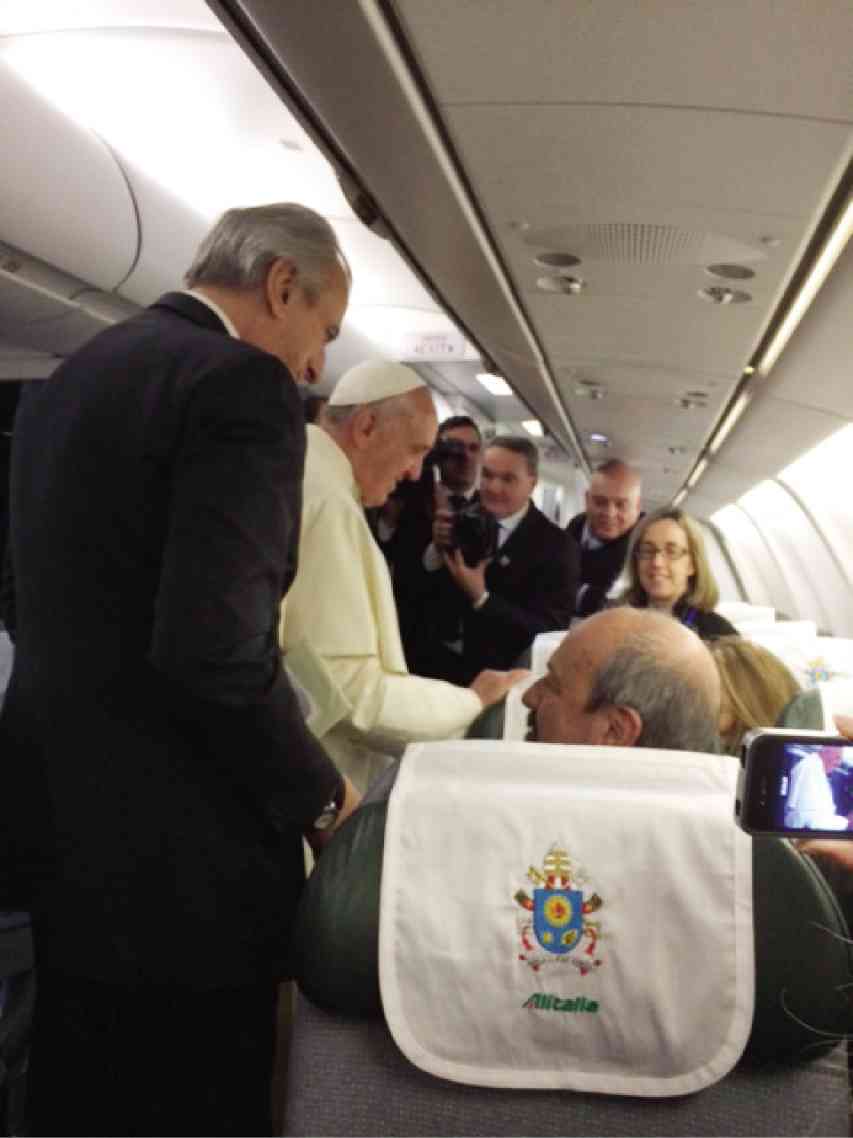 POPE Francis greets journalists at the start of his journey aboard Alitalia. Note the headrest with papal coat of arms.

The VAMP chronicles: What it takes to jet-set with the Pope

Pope Francis may have taken his papal name from the very popular medieval saint who reformed the Church that had gotten cozy with power and materialism by embracing mendicancy. But, of course, the papacy then as now could never take poverty literally.

Its worldwide prestige and universal character should ensure that it would have the modern resources and quite affluent means to discharge the mandate given it by Christ on Ascension day: Spread the Gospel around the world.

One means would be travel. Another would be the media. Both melded in the papal visit, or what the Holy See chose to call an “apostolic tour” or “pastoral visit.”

By traveling to the Middle East in 1964, Paul VI became not only the first pope to leave Italy since the early 19th century, but also the first to board a plane.

Coincidentally, too, it was Paul VI who started the annual celebration of World Communication Day, to reflect on any issue that is of currency to the mass media, during the feast of the Ascension in the mid-1960s.

It is not without basis that he has often been called “the first modern pope.”

So well-traveled was Pope Paul VI that he became known as the “Pilgrim Pope.” His successors continued his legacy, so that popes have often been portrayed as rock stars on a road tour.

Larger than life, often celebratory and colorful, apostolic tours seem to assume more and more the dimensions of a road show, the closest one could possibly get to the Second Coming.

And for journalists, covering apostolic tours seems like an extreme sport. The long flights, the perennial jet lag, and the demanding job of keeping up with an old man with a skullcap who rarely tires out appear like elements from “The Hunger Games.”

We got a crash course on how it was to cover an apostolic visit when Pope Francis embarked on his Asian tour of Sri Lanka and the Philippines, only the second Asian trip after South Korea last August of his barely two-year papacy.

Vatican media rules allow countries hosting a papal visit to endorse at most five journalists to board the papal plane. Since no one from Sri Lanka applied, the Philippines got five extra slots.

Later on, the Catholic Bishops Conference of the Philippines (CBCP) asked for three more, ostensibly to beef up its own coverage by church media. But perhaps feeling queasy about the number 13, somebody from the CBCP requested for one more.

And so, at 14, the Philippines was the single biggest country delegation aboard the papal plane.

All of the press traveling with the Pope were called VAMP, after “Vatican-accredited media personnel.” At first we thought that the Holy See Press Office, populated mostly by Italians, didn’t know what “vamp” meant in English. But the Italian dictionary revealed that the word has already been incorporated into the local vocabulary without any change—it completely means the highly sexual foil to the naïve and wholesome female ingenue.

So, was VAMP meant to play a negative counterpoint to papal wholesomeness? Would it play the worldly-wise reporter Gregory Peck to Audrey Hepburn’s royal ingenue in “Roman Holiday”?

It was winter in Rome when we boarded the papal plane, which should make everything seem sinister.

Beyond all those concerns, what was immediately evident was that papal plane media coverage was one dressy affair. Even church media so used perhaps to the solemn dress code when covering “church-y” affairs had not expected the press corps covering the papacy to be so well-dressed.

The women were in smart business clothes with almost always a striking scarf as solid accessory, while the men were in black suits and shining dark shoes.

The fashion-conscious affair was complemented by the Alitalia A330 that took the pope and his press pack from Rome to Colombo on Jan. 12.

The Airbus’ interior was in dignified gray that went well with the flight attendants’ blue uniforms and the press corps’ dark attires. If Milan Fashion Week were on the lookout for unorthodox fashion ramps, why not the papal plane?

Chartered for the long papal haul, Alitalia made sure the Pope felt right at home, from the papal coat of arms on the headrest to the menu card that bore the same insignia with the papal motto taken from the New Testament: “Miserando atque eligendo (lowly but chosen).”

On the invitation of Fr. Gregory Ramon Gaston, rector of the Pontificio Collegio Filippino, Alan Holdren of the Eternal Word Television Network-Catholic News Service briefed us greenhorns about what might happen on the papal plane. He informed us that the Pope would usually welcome each of the journalists traveling with him, both an exciting and anxious prospect for many of us.

Holdren asked us to prepare a short greeting for the Pontiff when he made his rounds—noting, however, that media people, with the Pope for the first time, usually would be so dumbstruck when the penultimate time came as to ever say anything intelligible.

Holdren was right. Despite the warmth he exuded and the sheer charm of his presence, the Pope mesmerized (or immobilized?) many of us so that whatever greeting we had rehearsed was either uttered inaudibly or not uttered at all.

The mesmerizing papal presence partly owed to the immense importance of the office. Francis is, after all, the Vicar of Christ and successor of Saint Peter, nothing less than the Supreme Pontiff of 1.3 billion Catholics.

The office is backstopped by a sovereign entity that, while being the smallest city state on earth (around 40 hectares), paradoxically also carries powerful weight in world affairs; the Pope has a diplomatic service that is the oldest in the world, not to say one of the most effective, as shown by the lifting of economic sanctions on communist Cuba by the capitalist United States.

That US President Barack Obama relented to the Pope’s request to lift the sanctions has been one-sidedly attributed to the “Francis effect.” The truth is that the personality factor could only go so far without the immense weight the office carries.

To be sure, rapprochement between the US and Cuba was set off more than 15 years ago when Pope John Paul II visited Cuba in 1998.

The oldest surviving human institution on earth, the Catholic Church, obviously looks at the world with a long-term lens.

Having existed for 2,000 years amid wars and alarms, it has always been willing to wait it out. As Francis said about the Church’s relations with China: “We must take it one step at a time.”

But for the papal plane from Rome to Colombo, one step at a time may prove too slow for a flight hurtling toward Asia. By the time the Pope arrived in Sri Lanka, the flight would have lapped up nearly 8,000 km and crossed nine countries—Italy, Albania, Greece, Turkey, Iran, United Arab Emirates, Oman, India and Sri Lanka—and eight time zones.

To some extent, the countries crossed, the kilometers covered and the time zones logged embodied the length and breadth, nay, the universality of the Church. But that was a fearsome and anxious thought for journalists already jet-lagged, care of a jet-setting pope who hardly seemed to tire out.