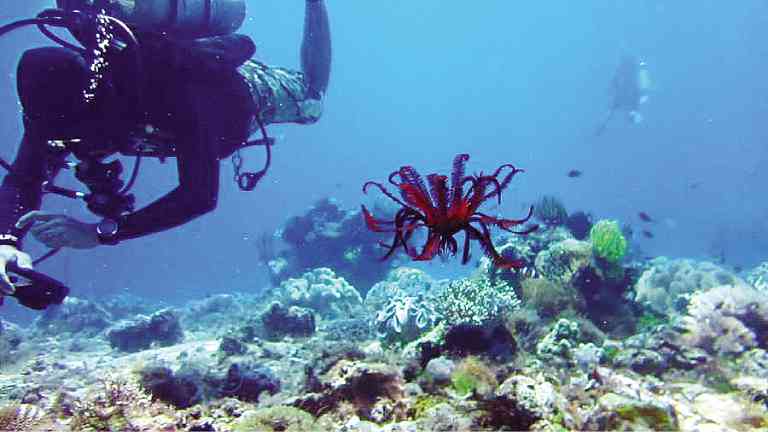 London travel fair gets an exciting glimpse of Camiguin, ‘island born of fire’

MANILA, Philippines–World Travel Market (WTM) is the very English event that brings together the world’s travel-industry players to London in November.

Diana, the Princess of Wales, graced its high-profile 1985 opening. Princess Anne, the Princess Royal, opened in 1989 an event marred by anti-Apartheid protesters who threw leaflets at her. Queen Rania of Jordan led the 2002 opening.

In 2003, film star Michael Douglas caused a stir when he attended WTM representing the Spanish island of Mallorca, where he and wife, Catherine Zeta-Jones, own a vacation home.

WTM launched in 1994 the World Responsible Tourism Day. It means “taking care of a world that we seek to promote, preserving our heritage and cultures, and taking into account the views and needs of local communities” and is one of the few tourism-anchored institutions that bridge the need to preserve heritage and respect local culture.

The exhibitions are attended by 186 countries and 5,000 exhibitors for the opportunity to present a diverse range of destinations to travel professionals. Events provide occasions to meet, network, negotiate and conduct business. In WTM 2012, buyers and exhibitors concluded deals that totaled £1.8 billion worth of business contracts.

Among the exhibitors from the Philippines this year is the island province of Camiguin in Mindanao that calls itself “the island born of fire.” It is an apt sobriquet with a touch of mystique. Few places in the world are as endowed with so much “exoticness” from its volcanic genesis.

There are more volcanoes than towns in Camiguin than towns (seven against five).

Two of these are active, the eerily named Mt. Hibok-Hibok (from an old Kinamiging word that means “that which heaves”; it last erupted in 1952), and the smaller peak Mt. Vulcan (first and last eruption in 1871); which is the island’s last-formed volcano.

Mt. Vulcan’s eruption occurred at 6:30 p.m. on May 13, 1871, and continued serially till 1875. Ruins of the coral-stone church, belfry and convent are what is left of old Catarman town, which was reduced to a no-man’s land in minutes. The town cemetery sank into the sea.

Today, the Sunken Cemetery is one of Camiguin’s top attractions. One can see the old tombs of limestone blocks through the clear blue water off Bonbon in Catarman.

The variety of natural attractions Camiguin offers are all attributed to its volcanic origins. On the flanks of Hibok-Hibok are six hot springs, the most visited being Ardent Hot Spring, named after the French nuée ardente (“burning cloud”) or hot pyroclastic flow.

There is another hot spring called Tangob on a pool that appears during low tide on the sea cliff just below Mt. Vulcan.

If there are hot springs, there are also cold springs. Camiguin’s latest attraction is a pool of volcanic soda water in Bura, the only one of its kind in the Philippines. A subterranean spring feeds carbonated bubbles that sparkle in the water. It is said to have healing effects on osteoporosis and cardiovascular disease.

The towering peaks are also an endless font of cascades and cataracts. The famous ones are Catibawasan Falls, dropping 70 meters from the tropical rainforests above.

Recently, the provincial government developed a road system all the way to Tuasan Falls, a shorter drop than Catibawasan’s but has a heavier cataract that cascades into a series of crystal-clear pools. The picturesque drive to the falls takes one along the peripheries of Tres Marias, three domes considered as adjacent volcanic edifices of Hibok-Hibok.

The new trans-island roadway developed by Gov. JJ Romualdo takes one to the cool mountain hamlet called Itum (Cebuano Binisaya for “black”), just below one of the three crater peaks of Hibok-Hibok of the same name.

From Itum it descends to the Phivolcs observatory where seismographs permanently monitor Hibok-Hibok’s magmatic activity.

“It has been steady all these years, indicating no imminent eruption,” says the resident volcanologist.

From the observatory’s deck is a view of Bohol on the horizon, the white limestone cliffs of Garcia Hernandez town clearly visible.

It is no wonder that foreign tourists who visit Bohol make a side trip to Camiguin, easily reached by a two-hour fast-craft catamaran from the port of Jagna town.

There is nothing unique about sandbars—they are a dime a dozen in our archipelago. But this one gives guests the front-row seat to view the height of Hibok-Hibok as it lords over the small province.

A trip to White Island is like paying homage to the three-crater stratovolcano that last erupted with a serial fury of lava, hot gases, steam, pumice and ash, and landslides that claimed 3,000 lives over a four-year period.

A stratovolcano is a “steep multilayer volcano, the layers formed from sequential eruptive materials characterized by explosive and effusive eruptions.” That is difficult to imagine as one gazes at Hibok-Hibok in slumber. But it is classified as one of the country’s six most active volcanoes.

A walkway with life-size Stations of the Cross winds on the fringes of Hibok-Hibok’s next-door neighbor, Mt. Vulcan, which a local guide says emits smoke from its small fumaroles at the summit.

During Holy Week, the walkway draws thousands of devotees who walk the 64-km circumferential highway (excellently paved) to complete their pilgrimage at the walkway. The Lenten event is called panaad (equivalent to panata in Tagalog). It was conceived as a memorial to the lives lost from Hibok-Hibok’s last eruptions (1948-1952).

All these experiences seem to liken Camiguin to volcano-ringed Hawaii.

Yet another island, the arbor-covered Mantigue Island Nature Park off the coast of Mahinog town, evokes images of the Maldives with its white sandbars and tropical huts lining the beach.

Also in Mahinog is a volcanic maar called Taguines Lagoon. Maar is a “broad, low-relief volcanic crater caused by a phreatomagmatic eruption, a type of explosion caused by groundwater coming into contact with hot lava or magma and characteristically fills with water to form a relatively shallow crater lake.”

At the Taguines maar is a zipline where one breezes over the tranquil waters of the lagoon.

A few restaurants and inns line the banks of the lagoon, some of which are owned by foreign expats.

Camiguin’s treasures do not stop with its towering volcanoes. The record number of dive shops and resorts mention about 20 dive spots and shoals that ring the island’s turquoise seas with a biodiversity that guests speak of in awe as though this was Galapagos.

The reference is not an exaggeration. Five vertebrate species are considered endemic to Camiguin. On land, it has diverse hiking and trekking trails that foreign tourists have discovered among themselves, offering vistas such as rice paddies akin to images of Bali, to a forest of Kimberly ferns on a high elevation.

A Camiguin trek may also include a climb up Hibok-Hibok’s crater lake which begins from lush tropical forests and lanzones groves.

One must remember that all this volcanism has given Camiguin an incomparably fertile soil.

A patent Camiguin advantage is its insular protection from fast-paced progress.

Camiguin is one of few localities in the country with an intact array of late-1800s to early-1900s heritage houses. Its Gabaldon school buildings are among those with the most beautiful architectural designs in the country.

In Sagay and Guinsiliban towns are among the last group of speakers of the vanishing Kinamiging language that originated from the Proto Northern Manobo family of languages (which includes the Binukid language spoken by the Higaunon indigenous people of northern Mindanao and the Kagayanen language of Cagayancillo Island in Palawan).

The Camiguin Tourism Office (www.visitcamiguin.org) has released a remarkable video commissioned by the provincial government, with delectable shots taken from a drone of the island born of fire, for the World Travel Market’s global audience in London.

It was designed and developed by Fermin Alvarez, a Spaniard and digital creative artist who has decided to call Camiguin home. With him in this venture called Social Noise is Cocoy Bajuyo, a Cagayan de Oro Atenean artist who has also settled in Camiguin.

Alvarez’s story is worth telling. Deciding to leave Madrid after the death of a friend, he quit his job to search for a special place that would afford him to realize his ventures “in a calm and relaxed way.”

He discovered Camiguin while on a Southeast Asian sojourn. “It is the most special of all the places I have ever been; I instantly fell in love with it,” he recalls.

He found on the island he “discovered” a natural splendor due singularly to its volcanic origins.

He is not alone. The presence of foreign-owned resorts and bed-and-breakfast inns that dot the Camiguin shorelines, lagoons and mountainsides attest to the fact that it has become a destination with global appeal.

Heritage is not far behind on Camiguin, a timely lesson for developers and tourism-industry players who have much to learn about heritage preservation. Part of that heritage is a one-of-a-kind local culture nurtured around a lifestyle born of volcanic fire.