‘Seasons of Desire,’ a story of love, treachery, vengeance

MANILA, Philippines—As a pre-Valentine treat, come and watch “Seasons of Desire”– a story of love, treachery and vengeance in an opera concert set on February 7, Saturday at 8 p.m. at the Abelardo Hall, College of Music in UP Diliman, Quezon City.

It is a tribute to the Filipino Asianovela craze, as well as an attempt to extend the love for opera to a broader audience. Using selected opera pieces from Wolfgang Amadeus Mozart and Giuseppe Verdi, the one-night only opera concert shall feature tropes from local and international dramas—the sudden tragedy, a betrayal of trust, a plot of revenge, a redemption—and incorporates these tropes to songs from famous operas such as “Le Nozze de Figaro,” “Magic Flute,” “La Traviata” and “Rigoletto.”

Soprano Elaine Lee was called “a new star in the Philippine Opera World” (Malaya Newspaper) with her “clear articulation, unerring pitch, her style smooth and fluid” (Philippine Star). She has had various performances both in the Philippines and in Canada.

She also joined the San Diego Opera Chorus in California. Her most recent roles were Lucy in Menotti’s “The Telephone” and Musetta in Puccini’s “La Boheme” with the Philippine Opera Company.

On the side, Elaine produces her own concerts and stage productions that feature opera excerpts, Chinese and Filipino folk classics, and Broadway selections. She holds a Bachelor’s degree in Music, with a major in Opera Performance (from the University of British Columbia in Canada).

There, she played Papagena in Mozart’s “Die Zauberflöte,” Shirley Kaplan in Kurt Weil’s “Street Scene,” Hebe in Offenbach’s “Orpheus in the Underworld” and Sarah Good in Robert Ward’s “The Crucible.”

She has also done a recording with XAX Music Entertainment for a translated Korean Teleseries soundtrack, “Endless Love 1 Autumn In My Heart” in 2002. Other achievements include awards from the Vancouver Women’s Musical Club and the Kiwanis Music Festival.

Nowadays, she has this vision for a while of producing a concert that comprises of opera excerpts that contains a storyline. It is a “Glee”-related influence style but in an opera format. Her goal is to be able to access and educate local audiences about opera.

Described as “an artist who possesses a beautiful voice that is smooth and clear and with a wide range of coloring plus unsullied musiciality” Tenor Ivan has been slowly earning a reputation as one of the most promising young tenors and a major talent to look at to in the country today – Inquirer.net

Ivan Niccolo C. Nery is a Tenor from St. Scholastica’s College, Manila. He has been very active in the country’s opera and classical scene during the past few years, portraying mostly lead roles and some minor roles and was featured in numerous concerts around Manila. Ivan won the 1st prize in the Jovita Fuentes Vocal Competition and is an Aliw award nominee for best actor in a musical (“Noli me tangere” the opera 2012).

A respected baritone in the Philippine classical music scene, Lawrence Jatayna has done solos for the major works of Beethoven, Puccini, Mahler, Rossini, and Mozart, and has done significant roles for the operas La Boheme, Madama Butterfly, Cosi Fan Tutte, and The Magic Flute.

He has also worked with the Singapore Lyric Opera (SLO) in January 2008 as “Doctor Grenvil” in “La Traviata”, was an opera chorus member of SLO’s “Tales of Hoffmann” (Feb-March 2009), the Singapore Symphony Orchestra’s “Fidelio” (February 2012), Opera Viva’s “Fences” (August 2012), then with SLO again as The Registrar / chorus member in “Madama Butterfly” (February 2013).

As a chorister, he was a member of the U.P. Singing Ambassadors (UPSA) in 1995 and was able to travel with the group to the U.S.A., Israel, France, Germany, Italy, the Netherlands, Austria, Spain, Denmark, the United Kingdom, and finally to Switzerland, where UPSA won First Place in the Festival Choral de Neuchatel.

In 2001, he was a pioneer resident artist of the first professional choir in the Philippines, The San Miguel Master Chorale. Lawrence is the vocal coach and vocal arranger for Philippine

Opera Company’s “Harana” and “Ang Bagong Harana”. He acquired his diploma from the U.P. College of Music, Major in Voice, under the tutelage of the late Professor Elmo Q. Makil. He is a currently a freelance vocal coach, vocal arranger, and voice instructor and is a voice faculty member of the University of the Philippines College of Music Extension Program.

Dingdong Fiel earned his Bachelor of Music degree from the UST conservatory of music and was the recipient of the Rector’s Award for Academic Excellence.

Nazer D. Salcedo is a much-awarded stage actor, director and classical singer. He is currently finishing his Masters in Theater at the University of the Philippines Diliman. He is a faculty of De LaSalle University Dasmarinas and MINT International College.

“Seasons of Desire” is a story of a couple excited to start their lives together as a family. While they prepare their wedding festivities (Cinque dieci, venti – “Le Nozze di Figaro”), there was a reminiscence of the man searching for a maiden to be his wife (Ein Madchen oder Weibchen – “Magic Flute”).

A call of fate happened that one rainy afternoon, he saw this lady doing her chores singing to herself (In uomini, in soldati – “Cosi fan tutte”). Their eyes met and the man serenades her (Deh vieni alla finestra – “Don Giovanni”). This encounter blossomed into a romantic entanglement. Nothing is sweeter than love. They finally got married and started their lives together they did planning on having children (Papageno/Papagena duet –“Magic Flute”). Soon, season of love bears fruit to a lovely daughter.

The mother died during childbirth. The season of treachery and vengeance loomed. The used to be strong man is now an old weak father. He raised the daughter on his own. She grew into a beautiful maiden. Every morning she goes to work at the Hopia de Leche Factory. The infamous owner of the factory is known for using his charm to lure women.

For him, women are nothing but a bunch of toys for pleasure (Questo o quella – “Rigoletto”). With her innocence, she never thought that this man has an evil agenda on her. He did his sweet talks and she immediately fell for them (Signor ne principe –“Rigoletto”). She felt like floating in love, enchanted by his charms, his handsome physique (Caro Nome – “Rigoletto”). 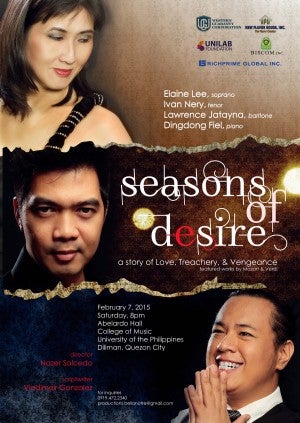 The owner asks permission from the maiden’s father, with the intent of bribe to take her out for a day. The father, enraged by the man’s seemingly immoral character, turns him down, sends him away. His refusal pushed the owner to do something drastic.

As the day is about to end, the father went to fetch his daughter from the factory just to find out that his daughter was no longer there. Desperately he searches for his daughter fears for her safety and time is running out (Cortigiani). Suddenly the father hears a cry, calling his name. He sees a helpless maiden apparently torn of her dignity (Mio Padre…tutte le feste). The father vows vengeance as soon as he finds the mystery criminal (Si vendetta, tremenda vendetta).

The mystery man wore a mask man revealed his identity at the bar as he brags to his drinking buddies that women are easily replaceable (La donna e mobile). The father recognizes the boss of her daughter in the Hopia de Leche Factory is the mastermind. He found an opportunity to plot his revenge by knocking the man unconscious.

When the man gained consciousness, he was tied up and shouts for help. The innocent maiden freed him in return he killed her. This is treachery. The father saw a dead body in the room where he locked the man never to expect it is his daughter. She apologizes to her father as she bids farewell. Her spirit will rest together with her mom. She pleaded her father to forget vengeance and just forgive (V’ho ingannato). She pleads to forgive and let go of all the anger (Addio del passato – “La Traviata”).