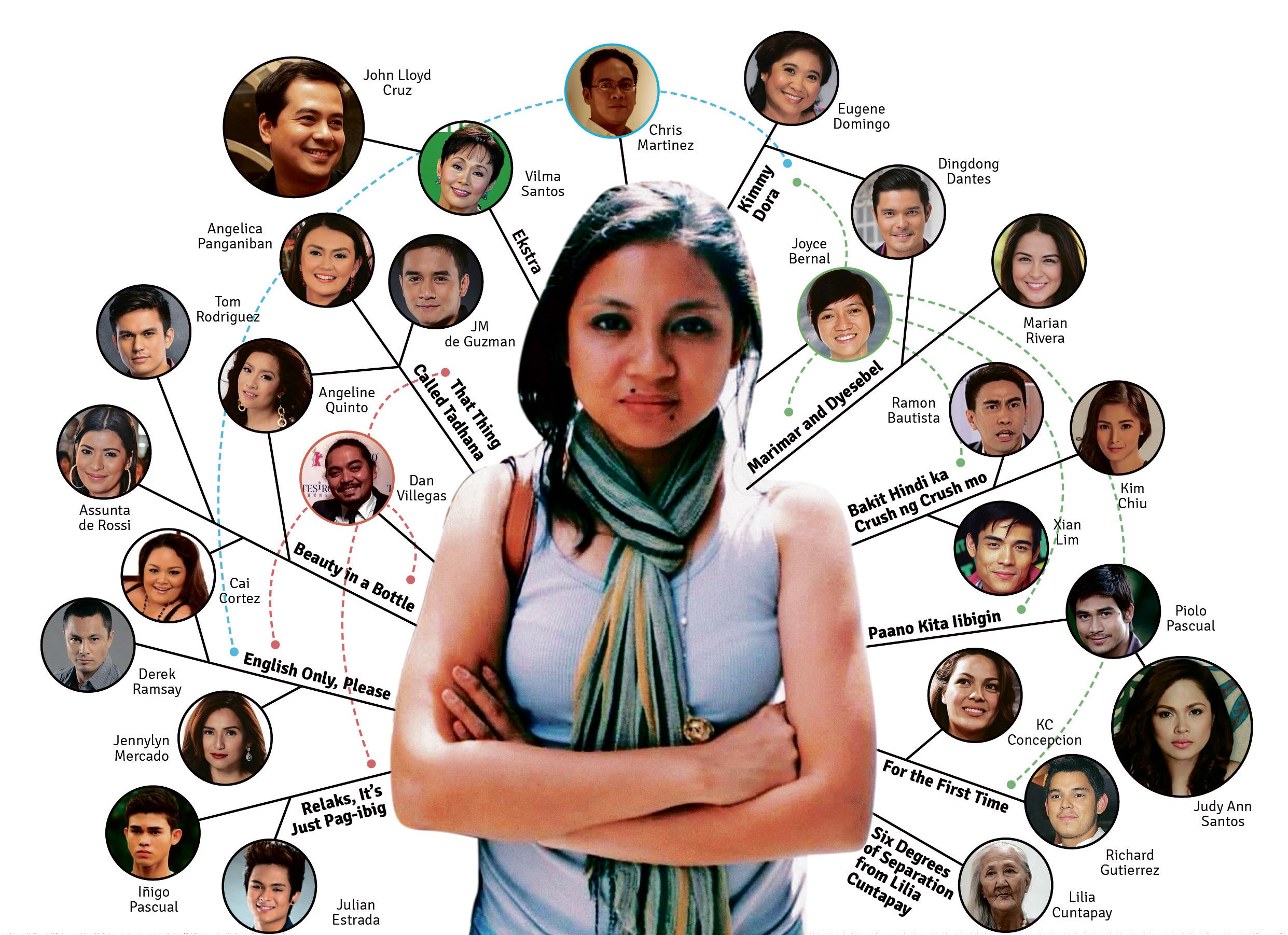 It was the first week of the year and we were sitting in a restaurant in Podium, just steps away from the mall’s cinemas, waiting for Antoinette Jadaone.

The location was apt. After all, this talented writer-director has been giving us reason after reason to go to movie theaters.

At the next table, a woman discussed her relationship troubles with a friend. “Ang tanga-tanga ko,” she said. It could have been a scene out of an Antoinette Jadaone film.

In some ways, you can say that Antoinette was destined to be a filmmaker.

As early as grade school, Antoinette found herself behind the camera, shooting home videos with her aunt’s Hi8 recorder.

While studying in the University of the Philippines, where she switched majors from Broadcast Communications to Film, she made her first movie—“Plano,” a short film about a little girl and her paper airplane that’s under three minutes long. She cast a neighborhood kid in the film.

Antoinette says that she knew as early as college that what she really wanted was to be a filmmaker: “’Yun talaga gusto ko, mag-direct ng romantic comedy for Star Cinema.”

Abracadabra hired her and she was soon given the chance to film her own commercial. “Super pangit, super pangit niya, as in,” Antoinette said, cringing. And while there was good money in advertising, she couldn’t deny that her real love was film. “Sobrang idol ko si Direk Joyce (Bernal),” Antoinette says.

She made it her mission to meet the director, telling her org at the university that if they needed a speaker for their workshop, she’d take care of contacting Joyce, even if she had already graduated. “Gusto ko lang ng excuse na ma-contact siya. Mabait naman siya. Nakuha ko siya and si Mae Cruz for the workshop. Sabi ko, ‘Direk Joyce, kapag may bakante ka na slot for PA (production assistant) or intern, kunin mo ako kasi gusto ko.”

To her surprise, Joyce did call, telling her she needed a script continuity supervisor. Antoinette immediately quit her job.

On her first premiere night, Antoinette was so excited to see her name in the credits that she took a picture.

But because work was irregular, on the side, she would find raket, editing videos of ballet recitals and birthday parties and, at one point, working for The Picture Company.

Because their team was small, Antoinette doubled as script continuity supervisor and production assistant, even applying KC’s character’s scar.

The film was lauded by critics, and won six awards at the 2011 Cinema One Originals Digital Film Festival, including a best actress nod for Lilia. “Six Degrees” also made the rounds in film festivals abroad.

It was a beautiful film, one that made us laugh and cry, and one that cemented our respect for Antoinette the filmmaker.

Although directing was the dream, writing screenplays came naturally to Antoinette. She has been writing all her life—for her school paper, for Junior Inquirer, on her blog, and she’s had a number of pieces published in Inquirer’s Youngblood section (one of which was included in the fourth Youngblood book). She’s a brilliant writer, one who can come up with one-liners that leap from the movie screen and into people’s lives. (We cannot count the number of times friends and colleagues have used the line “Traffic sa Edsa” on us, quoting Jennylyn Mercado’s character Tere Madlansacay after watching “English Only, Please.”)

2014 was a huge year Antoinette. Four of her films hit the big screen: “Relaks, It’s Just Pag-Ibig” which she co-wrote and co-directed with Irene Villamor; “Beauty In A Bottle” which she wrote based on a story by Chris Martinez and directed; “English Only, Please,” the Metro Manila Film Festival entry that she co-wrote with Anjeli Pessumal; and the film that’s closest to her heart, “That Thing Called Tadhana,” the dream project she wrote and directed (it won awards at last year’s Cinema One Originals).

“English Only, Please” was a huge hit, raking in almost all the awards at the Metro Manila Film Festival. “Nagulat kami, as in. ’Di namin in-expect. Ako gusto ko lang manalo si Jennylyn na best actress and si Dan na director.” The film got those awards and more and people are clamoring for a sequel. There will be one.

It’s obvious that Antoinette is a big fan of romantic comedies. “Siya ’yung favorite genre ko. Favorite ko ’yung ‘My Best Friend’s Wedding,’ ‘Don’t Give Up On Us,’ ‘One More Chance.’”

Antoinette also touches other people’s lives with her company, Witty Will Save the World, which she runs with Chinggay Nuque. Their planners, which they first released in 2010, and slambook, have a strong following. Their latest planner, “Relaks, Puso Lang ’Yan, Malayo sa Bituka,” which Antoinette wrote, is another winner.

Witty Will Save the World will soon publish companion books for “That Thing Called Tadhana”—the award-winning screenplay and “The ArrowWith The Heart Pierced Through It.” They also plan to come out with journals.

Just like the characters in her films, there are many things to love about Antoinette—how hardworking she is, how funny, how humble (she dissolves into embarrassed giggles when you lavish her with praise), how self-deprecating, how quick she is to give credit to others, even for her own sense of humor.  “Hindi ko rin alam bakit ganun ’yung sense of humor ko. Na-develop rin siguro kasi nagtrabaho ako with Direk Joyce kasi si Direk Joyce is the funniest person I know,” she says.

Asked which of her awards she treasures the most, she says, “’Yung best actress ni Lilia and ni Angelica.”

Antoinette has a lot in store for fans (“May mga fans?!” she laughs, in her self-deprecating way). She’s currently in talks for future projects.

Antoinette’s focus may be on romantic comedies, but the truth is,we think she can do anything. But for now, she wants to give us love stories that thrill, tales of hugot and kilig.

And we’ll take it. We’ll keep buying movie tickets and grabbing buckets of popcorn and we’ll take whatever Philippine cinema’s new rom-com queen has to give.