Why The 1975 is anything but a pop cliché | Inquirer Lifestyle 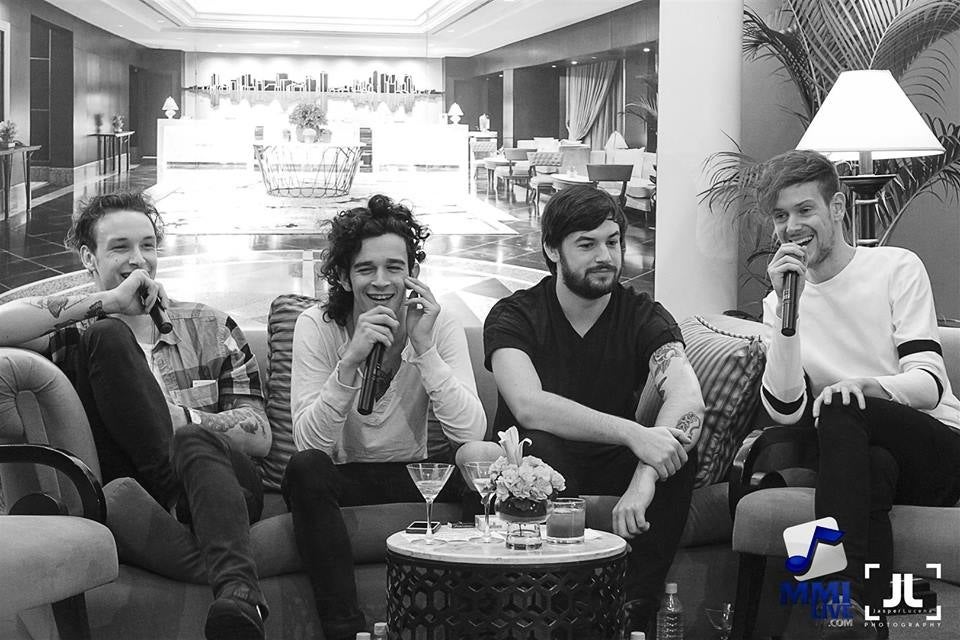 Why The 1975 is anything but a pop cliché

Can I get some paracetamol, please?” Matt Healy asked an assistant, as the band The 1975 was about to wrap up a series of media interviews at Diamond Hotel, a day before its concert at the SM Mall of Asia Arena.

Healy, The 1975’s 25-year-old front man, promptly popped a pill with a swig of water, curly locks bobbing in the air.

We wryly toyed with the idea that all the attention may have, quite literally, gotten to his head, as hordes of giddy fans stalked them at the airport and skulked at the hallways outside the room.

“That happens in lots of places, but Manila is like one of the most intense. They’ll follow and they’ll queue and be everywhere,” Healy marveled.

“The last time we were here, we were on the roof bar and there were girls hiding underneath the couches and stuff,” drummer George Daniel recalled.

Last year, the Manchester-based rock quartet got a hefty dose of Filipino fanaticism when it went on a promotional tour at the Ayala Malls. The band performed its joyride hits like “Sex,” “Girls” and “Chocolate” from its platinum-selling eponymous debut album before thousands of squealing teens and twentysomethings. “

The thing we took away last time was just how much more intense it was than anywhere else in the world, fan-wise,” guitarist Adam Hann observed. “It was the most fanatical response we’ve ever had, and probably still to this day, really.”

You’d think all the band members have gotten used to the attention, but Healy begged to differ: “We were 23, 24 before ourfirst record even came out, so three or four months of intensity doesn’t even erase 24 years of just being nobody; so we’re not quite used to it yet.”

After getting some buzz with its first four EPs in 2012 and 2013, The 1975 embarked on a touring circuit fronting for the likes of Muse and The Rolling Stones and playing in music festivals before releasing its first full-length album in late 2013.

The album debuted at No. 1 on the UK Albums chart, and the rest is history.

The influence of film on the band was put to good use when The 1975—along with Chvrches and Bastille—was hired to rescore the 2011 Ryan Gosling movie “Drive” late last year. The 1975 contributed a melancholy track, “Medicine,” which got good reviews.

With saxophonist John Waugh as the band’s new member, The 1975’s music stirs a welcome wave of nostalgia for older music fans. Songs like “Heart Out” and “Settle Down” have soulful hooks reminiscent of the likes of Johnny Hates Jazz, Go West and Paul Weller during his Style Council days. One can even hear echoes of Annie Lennox in the subtly seductive track “Menswear” and the hauntingly beautiful ballad “fallingforyou.”

When Healy’s heavily accented wail comes in, we’re taken back to the 21st century.

The boys are already working on their sophomore album, which is expected to drop next year.

“The first record was about the pursuit of love, whereas this [new] record is about the cultivation and the preservation of love… when you get a bit older,” Healy explained.

The band’s attitude about growing up is what makes it wholly relatable and appealing to the current generation. The songs explore themes that people would rather turn a blind eye to, as evidenced by explicit music videos that mostly show Healy smoking, drinking, doing joints, and cavorting with scantily clad models.

“The way I talk about love on the first record, it was very much nonplatonic; it was a sexually fueled record, not in a  particularly angsty or crude way… But all of the themes were inspired by my sexual desires, whereas the next record isn’t like that. There’s a lot about death and change. But it’s still gonna be a 1975 record… the theme of sex, drugs and rock ‘n’ roll.”

Healy said the band’s musical evolution runs parallel to the fans’ growth, and it will show in the band’s future releases: “You hear that record when you’re 17 and, like, ‘Oh, my God, that’s me!’ You hear it three years later, and maybe it’s not quite you, maybe you’re a bit further on than that. So the next record is for those people, I think.”

Is success everything they had expected?

“No, and yes. It throws up a lot more answers and a lot more questions than you’d imagine,” Healy mused. “I always say that success is the ultimate destination of self-acceptance, which is what most artists struggle with, where the neurosis comes from, and when the humanity and the humility come in the music. You don’t lose that. But I don’t know. The idea of success, like what Adam would say, is that if you’re doing something happy, then you’re successful.”

“Working toward a destination is not a realistic mind-set to be in at all. That isn’t how life works,” Daniel pointed out.

“Well, your aspirations grow, don’t they? With everything that you achieve,” Healy asked him.

“If you’ve ever considered yourself fully successful, then where is there to go? You’re not gonna push yourself to do anything else,” quipped Hann.

Despite its apparent profundity, which is pretty rare in this industry, the band doesn’t seem worried about relating to a mainstream audience.

“We don’t share the banality and the lack of forward thinking that pop music normally presents itself with. It’s normally a commodity of a culture that isn’t that interested in advancing itself artistically,” Healy said.

“What I mean is, obviously, pop music has its associations. Nothingness. Frivolity. Like… It’s sung to be spread. [But] we don’t do that,” he continued.

“We love pop music, we love big melodies. I always say that our ideal song would sound like ‘I Wanna Dance with Somebody’ by Whitney Houston, but have the conviction of ‘Hallelujah’ by Leonard Cohen. You know, that’s the ultimate pop song for us.”

Addressing the big debate among music fans as to whether The 1975 is straddling pop and indie genres, Healy had a firm response: “There’s no such thing anymore.”

“There’s no direct effort to straddle both genres. We write music that we want to write, and it just happens to land where it does,” Hann explained. “If you want to talk about where that is, then that’s fine. It’s not really a big issue.”

“It’s such a clichéd thing to even begin talking about when you’re in a band, especially when you’ve had some sort of validation,” said Daniel. “But the reality is that this generation, they don’t consume music in the same way.”

Bassist Ross MacDonald had a slightly different take on the matter: “I think it’s a good thing in hindsight that there’s a debate about what genre we are as well…”

“Oh yeah, of course, because that’s what art is—the galvanization of a dialogue that makes things more interesting,” said Healy.

“We never set out to do that, though,” Hann objected.

“You know what, I challenge what you just said, George. I think that we do get wrapped up in the fact that we do think of it as being a clichéd thing,” Healy argued. “But if you’re in an overtly left-field alternative band, that question simply doesn’t come up, so maybe it’s not.”

The front man paused, turning to us. “We’re a bit bored of that. We’re a bit bored of just having to say we have a progressive attitude toward pop music, we create in the same way we consume, because you feel like an idea doesn’t even resonate to us because we challenge it for some reason.”

As an afterthought, we remarked that they were anything but clichéd, and the band looked somewhat relieved.

“That’s good. We’d always rather provoke a debate than [create] art that provokes the most apt people to be at their most ambivalent,” said Healy. “I mean, what’s the point in that, you know?”