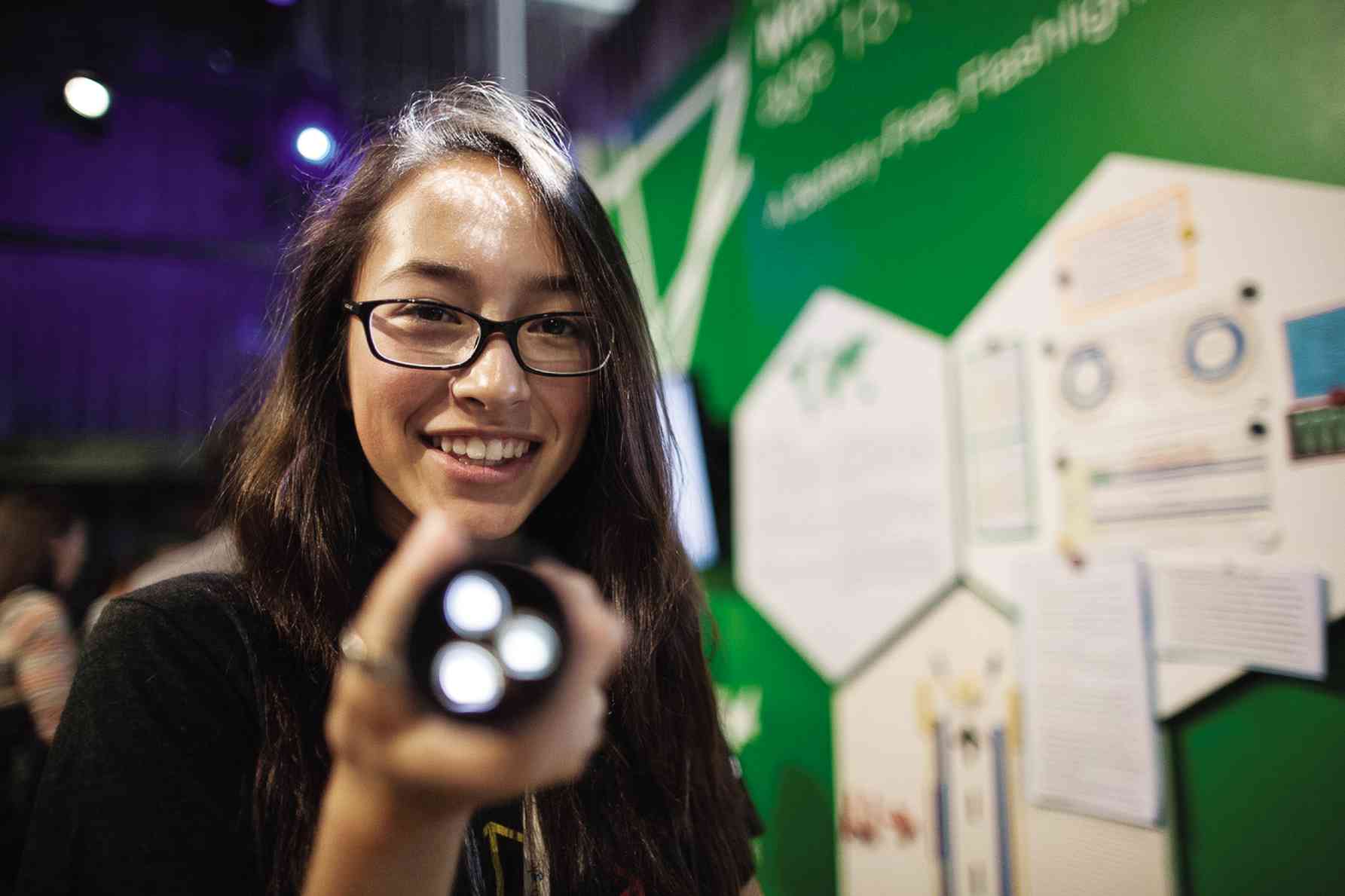 She was named one of Time magazine’s 30 Under 30 Youth Changing the World, and was featured on “The Tonight Show with Jimmy Fallon,” NBC News, PBS, Yahoo News and more.

Makosinski has become an inspiration to youth around the world, showing that one can invent the future—with inspiration, curiosity and a desire to work towards a goal.

Her claim to fame: a flashlight powe red solely by body heat, inspired by her friend from Mindanao who got failing grades in school because she couldn’t spend time to study at home since there was no electricity.

In an interview with NBC, Makosinski said, “When something happens to someone you know, it usually affects you more… It opens your eyes that something like this could happen to other people around the world.”

Having done science fair projects since Grade 6, Makosinski was spurred into action. She had to learn manual skills in a machine shop, winding tiny transformers and working with small electronic parts.

She also sought help from experts; after three months of hard work in the lab, she was able to come up with a working flashlight.

The flashlight makes use of Peltier tiles, which can produce a small amount of electricity when heated on one side by the palm of your hand or your forehead, and cooled on the other by air passing through an aluminum tube. She’s currently talking to multiple manufacturers, and has filed a patent for her invention.

“The biggest misconception about students who join science fairs is that we’re these super genius kids. But in fact, I’m not the genius nerd some people expect me to be. The only difference is, we’re always questioning how things work,” she said.

She has been presenting newer iterations of her flashlight, like the Peltier headlamp which she previewed at the 2014 Intel International Science and Engineering Fair. The headlamp includes a charging unit, allowing it to store a charge during the day and be switched on when needed.

She has also given several TEDx (Technology, Entertainment, Design) talks about her journey, which started with her interest in insects—she was amazed at how complex they were despite their size.

She recalled some of her most memorable moments: “I remember the first time I arrived on the Google campus and biked around to explore (the area). It was amazing. I also remember meeting younger children and youth close to my age after speaking to them, and just seeing how inspired they were was so surreal.”

Reflecting on everything that has been happening to her, Makosinski said: “Anything is possible. Sometimes you won’t get where you want to be in the way you expect, but with hard work and being kind to others, you can achieve anything. So, be nice to other people! Go up to the people standing in the corner alone in the room at events; you never know what it might lead to. I know I used to be that person who stood alone at social gatherings, and when people came up to me it was the greatest thing, to see that someone cared and was interested.”

Makosinski draws inspiration from many sources. She mentioned the likes of Charlie Chaplin, Tesla, Tyler Oakley, Ravi Shankar, Mel Brooks, PK Page and Houdini. She explained: “I look up to people who made something of themselves and shared their talents and knowledge with other people.”

Having helped out with her dad’s shoots, and having learned Final Cut Pro at age 10, she mentioned how, if all the “science stuff” didn’t happen to her, she would be pursuing a career in media production. “My favorite films are anything by Mel Brooks, ‘Pelle the Conqueror,’ and ‘City Lights.’ I’m still passionate about film, and I would love to end up as some female version of Bill Nye.”

Her advice to her fellow youth is: “What you want to do with your life later should not be what others, like your parents or friends, say you should do. It should be what you want to do. You have one life, one chance, so don’t waste it on doing something you’re not interested in.”

She hopes to combine her interests in film, science, social media and entrepreneurship in the future, and hopefully inspire the youth to invent for a better world. But for now, her immediate goal is to find a way to light up the world of her friend in the Philippines, and of course, finish her college applications, just like every other graduating high school student.

2 Filipinos among top Canadian immigrants for 2014