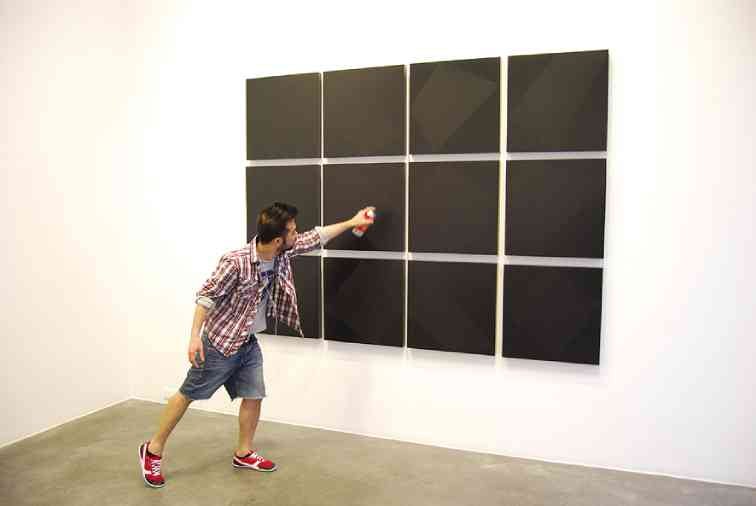 To be global implies being without local roots, which isn’t the case for the 38-year-old Filipino artist who was born and raised in Dumaguete City, Negros Oriental. While he’s spent considerable time in Germany, Luxembourg, the United States and Spain, his interdisciplinary art practice is rooted in his hometown and country.

Seeking the profound in the mundane and freedom from formality, Ardeña experiments with everyday objects and multiple mediums such as performance, painting, drawing, photography and installations to activate nontraditional spaces through his art. By referencing iconic Filipino or Asian objects like soy sauce, the calamansi and the Jollibee French fries container, he disrupts their contexts to interrogate identity, space and traditional approaches to art-making.

Freedom from the cube

Ardeña refers to his works as projects rather than exhibitions, which makes sense considering that his roster of works defies categorization.

“An exhibition typically implies a conventional setup, like a white cube,” says Ardeña. “I work with different presentation formats; sometimes ephemeral, sometimes the exhibition is the work itself. I love the challenge, and I am eager to experiment with different platforms.”

This was already evident in the artist’s early career. After receiving his BFA in Painting and Drawing from the Academy of Art College in San Francisco, California, in 2001, he would eventually pursue different modes of art production that went beyond the canvas and sketchpad.

His prior exposure to art in Europe had opened his eyes to new possibilities.

“I was lucky enough to be exposed to very experimental modes of thinking in Europe before coming to the United States. Before I started formal training in art school, I lived in Germany and Luxembourg as a teenager, where art was very conceptual and philosophical. Can you imagine, from Dumaguete as a kid to the shock of Beuys and Duchamp and the crazy Viennese Actionism. I thought, I can think for myself and build a knowledge based on the need that would arise as my art evolved,” Ardeña says.

When he moved to Madrid in 2008, Ardeña began working on projects that were interactive, like “Translating Soy Sauce” at the Centro de Arte Dos de Mayo, a contemporary art museum in Madrid.

“I worked with homemakers from the museum’s immediate neighborhood,” Ardeña says. “The idea was to invent new Spanish dishes using soy sauce. Somebody even made leche flan with soy sauce.”

“There was no point in using a white cube. Instead, the highlight of the project was a fiesta with the participants, their family and friends at the cafeteria where they brought the food. We printed a recipe book instead of a catalogue that compiled all the dishes they made, and pages that allowed people to write their own recipes.

Since relocating from Madrid to Dumaguete in 2013 to teach Fine Arts at Silliman University, Ardeña has turned to his immediate environment for inspiration. The move from a big urban city to a small provincial town shifted his thinking.

He had long been critical of traditional exhibition spaces because he felt them to be too confining, so in the open areas surrounding his Dumaguete house and studio Ardeña was able to create art derived from and made in nature.

“Using starfishes, orchids and turtles endemic to the immediate area of the house where I live is even exotic for someone from Manila, let alone somebody from Europe or the United States,” Ardeña says. “The problem is that even the notion of everyday experience is standardized. Something outside of this frame of perception is inevitably ‘the other.’”

Ardeña is the featured artist of Archivo 1984 in Art Fair Philippines 2015, which takes place at The Link car park at Ayala Center, Feb. 5-8.

The Sand Codex consists of 50 sandpaper drawings in which the artist used metal to scratch architectural details from his birthplace in Dumaguete on the surface.

“I started using sandpaper since 2007. I did a series of 200 drawings using the Berlin Wall as a tool. Here, it was just a natural transition in terms of the subject matter because the sandpaper is used as a construction implement,” says Ardeña.

In Ghost Paintings, a series of miniature paintings of nail polish-coated objects from the Philippines, Ardeña explores the idea of a painting being converted into a readymade or a manufactured ordinary object turned into art as popularized by the artist Marcel Duchamp. However, he says, “I don’t think of the readymade in terms of its Duchampian reference anymore or the object as an isolated subject.”

Ardeña began this series in 2011 by copying several famous paintings.

The reopening of Archivo 1984 Gallery in its new space at 2135 Chino Roces Ave. in Makati City on Feb. 5 will feature Ardeña’s Salamin Codex of 100 botanical embossed drawings on foil paper of plants surrounding the artist’s home in Dumaguete and Codex Delicatessen, a series of 200 spray-painted still-life doilies representing a cornucopia of toys taken out of their original sexual connotations.

“Living in Dumaguete teaches me that art is a holistic experience,” Ardeña says. “This is far from the idea of art being taught in the university, from the walls of the museum or from the books you buy in the museum shop—an isolated practice. What is the purpose of art where I am right now? Why am I here? I don’t feel like I am making art. I am living my own experiences in response to these questions.”