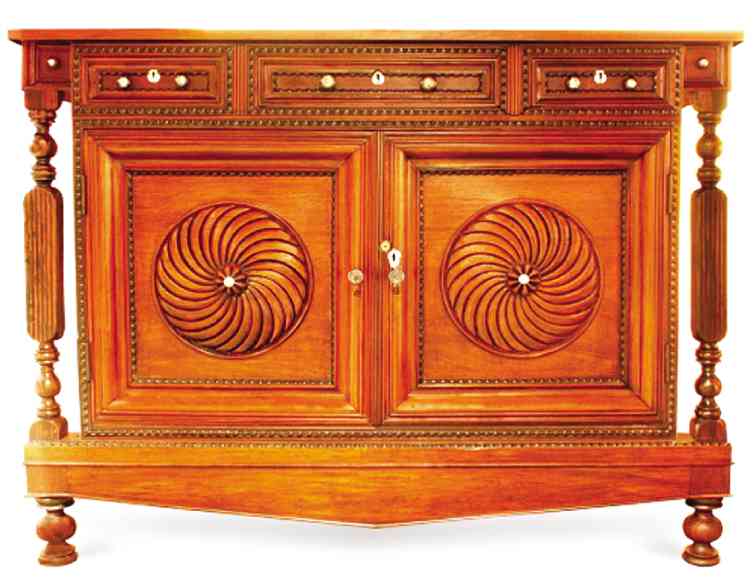 León Gallery is assembling 147 pieces of artworks, antiques and objets d’art from distinguished provenances for the Asian Cultural Council (ACC) Philippines Art Auction, its first auction for the new year.

In partnership with the ACC, the auction will be held on Feb. 7, 2 p.m., at G/F Eurovilla 1, Rufino and Legazpi Streets, Makati City.

The pieces come from the collections of Enrique Zóbel, Luis Ma. Araneta, and Sen. Nikki Coseteng, and other distinguished collectors.

“In this sale, the contemporary works dominate, followed by the Moderns, and then the Old Masters,” Ponce de León said. “Another highlight by the way is the ivory, silver and kamagong crucifix that is truly a mastery of the Filipino hand.”

According to Ponce de León, the furniture stand-out in this auction is the Arnedo-Macam-Dalusong Sheraton Sideboard, which has a starting price of P1 million.

Social historian Martin Imperial Tinio Jr. notes that this furniture—which stands on four tapering spade-footed legs in front and two at the back—is unusual because of its size and the beauty of its inlay.

“The skirt of the sideboard is inlaid in front with a foot-and-a-half-wide spray of large flowers and leaves sprouting from each leg,” Tinio says. “Kamagong inlay on the center of each leaf gives a contrasting effect on the design. The top and bottom moldings as well as the drawer frames are inlaid with bands of stylized laurel leaves on kamagong.”

The Florendo Cabinet, which has a starting bid of P80,000, bears elongated door frames with semi-circular ends surrounded by beading on both panels.

“This two-door narra cabinet, made with beautifully grained narra planks with exceptional joinery, is simple in design and has a sturdy and masculine air to it,” Tinio said. “It was most probably commissioned for the master of the Florendo house. Its four inverted and turned vases resting on bun feet support a thick plain base with a pair of doors that open to reveal three horizontal shelves. The middle shelf has a pair of drawers under it with brass ring drawer-pulls.”

Also a coveted piece is the Ivory Crucifix with Silver Cross, which also bears kamagong and silver materials. It has a starting bid of P120,000.

“This ivory crucifix is unusual, because seldom does one see the cross and base overlaid with silver,” says Tinio. “The ivory corpus is of the mid-19th century and has typical Philippine stance. It has a beautifully carved torso with extremely fine detailed hair.”

One of the highlights in the auction is Felix Resurreccion Hidalgo’s oil on canvas, “Una Dama a la Luz de la Luna,” which descended from the estate of the artist himself. It has a starting price of P1.8 million.

When Hidalgo died in 1913, there were no legitimate heirs to his fortune of real estate, shares of stocks and paintings. His mother, Dona Maria Barbara Padilla y Flores, became the inheritor of his possessions. When she died a year later, she left the Hidalgo-Padilla fortune to her heirs. After over a hundred years, this piece will finally cede from Hidalgo’s family.

Meanwhile, Victorio Edades’ oil-on-wood “The Lady in Maria Clara,” which shows a woman sitting in the open, will be auctioned off at the starting bid of P1 million.

Edades, the icon of modern art in the Philippines, described the work as modern while offering the timelessness of classical art.

Another noteworthy piece is J. Elizalde Navarro’s 1992 watercolor-on-paper, “Morning Mist over Ubud, Bali,” which contains the artist’s signature strokes and intense colors. It has a starting price of P80,000.

Navarro gained a reputation in the art circuit in Indonesia. Collectors from different parts of the country would visit the Bamboo Gallery in Bali to see his works.

Brothers Roland and Olan Ventura are represented in the auction.

Abstracts by Raul Isidro, Edwin Wilwayco, Florencio Concepcion, and Romulo Olazo will also be auctioned off.

Catalog access is at www.leon-gallery.com and for more inquiries, call tel. 8562781 or e-mail at [email protected]