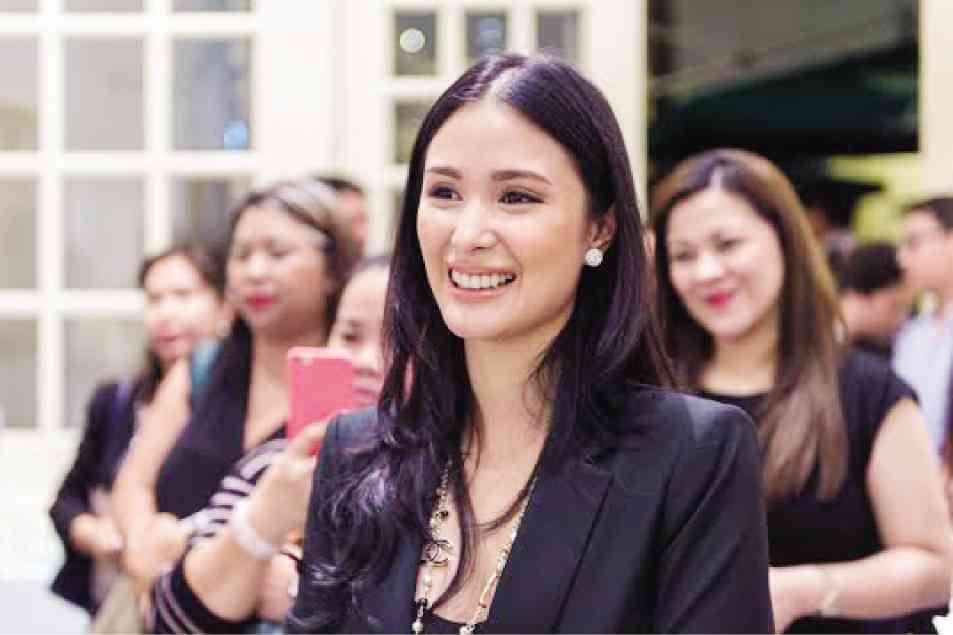 HEART is seriously considering a Fine Arts course in college after passing the high-school equivalency exam given by the Department of Education. Either that or she becomes a veterinarian.

One drizzly, humid night in Singapore, actress and product-endorser Heart Evangelista, aka Love Marie Ongpauco, again made her contemporaries eat dust back home.

Heart, recently unveiled as a talented painter, displayed what she considered her best works at the chichi Chan Hampe Gallery of the world-famous Raffles Hotel earlier this month.

The place was fully packed and, many of the guests had to step out to make space for new arrivals.

Philippine Ambassador to Singapore Antonio A. Morales said Pinoy expats were asking him until the last minute how to get invites to the venue for “Love Marie: A Solo Exhibition of a World Class Filipina, Love Ongpauco.”

As white wine flowed and carbonara was served in tiny dishes, Heart told the stories behind each painting to a select group of Manila-based reporters flown in by Cream Silk.

(Heart has been endorsing Cream Silk hair conditioner for 16 years now. The brand just celebrated its 30th anniversary and was instrumental in introducing Heart’s art to a global audience to showcase the Filipino woman’s world-class quality.)

“Magulo ang utak ko while I was making those. I named one ‘Queen’ after [Lovi] as a joke,” Heart explained.

“It looks like she’s [onstage]. Siguro [it’s about] the ups and downs of being in show biz,” she explained.

(Note that five of the six works featured in Singapore had already been sold during Heart’s previous shows and were only loaned by supportive patrons.)

The actress was candid enough to reveal that her much-publicized tiff with her parents over her latest choice of life partner fueled most of her recent works.

Once her engines are revved up, Heart can do major damage to a large canvas in less than 24 hours.

Heart pleasantly surprised both show-biz world and the country when she suddenly emerged as an upcoming artist by holding a one-woman show at Ayala Museum in May 2014.

The show stressed a point with its title “I Am Love Marie.” The actress showed 19 paintings, all signed “LM” at the bottom.

“I was overwhelmed [by] the initial reviews. [Painting] was something people did not expect of me. It was something I always kept to myself, but ever since I was little I was painting na,” she recalled.

Heart, who became a household name after doing mostly romantic/drama-theme movies and teleserye, has actually been painting since she was a pubescent kid.

One of her first mentors, Ivan Rojas, once gave up on her. “Matigas daw ang ulo ko so he allowed me to do my own thing; but [he eventually] helped me with tips, like [what is] the best brand of paint… He would watch me, listen to music, drink wine [while I painted],” the actress said.

Heart’s common subject is a woman that she calls “the girl.” No, the artist stressed, she is not her.

“The girl,” Heart explained, is a projection of what she felt during that specific moment of her creative process. Which means, she can be pensive, hopeful or melancholic.

One common denominator is Heart’s use of a colorful, Skittles-inspired palette.

“The girl” may look dark and brooding, but her backgrounds (as many connoisseurs have already noted) would remind one of Gustav Klimt and Frida Kahlo. Her sold-out “Tres Marias” series come with a dash of Lydia Velasco.

“I guess it has something to do with being an actress. The colorful details in the background reflect my being hopeful [no matter what],” she said.

While there are those who insist on dismissing Heart’s talent, her ability to communicate through oil and canvas is undeniable.

Respected artists Sansó and Ramon Orlina cut the ribbon during her second show at Galerie Joaquin.

Businessman Fernando Zóbel owns one of her pieces. Her first painting, “Love’s First Blossom,” was snatched up by Ilocos Sur Rep. Ronald Singson.

“Cathedral,” a 44 x 44 cm oil on canvas shown in Singapore that reminds one of Manuel Baldemor, belongs to a certain “Mr. Herbert Bautista.” And the orders keep coming.

Heart said she finds it difficult to turn her back on commissioned works. However, she needs time to prepare for her wedding to Sen. Chiz Escudero next month.

Another thing: An artist is usually more productive when he/she is undergoing an emotional crisis. And the universe knows that Heart, right now, is giddy happy.

“It’s true,” she said of this observation. “Before, when I was happy, I couldn’t write in my diary when I was really happy. But when I’m sad… Siguro that’s also how it is when you’re painting.”

If there’s anything that would keep Heart from becoming a full-fledged painter, it would be her other plans that include going to college to immerse and formally educate herself on the art process first.

“Maraming possibilities. I’m not too old to become a veterinarian,” she added.

So, does Heart consider painting a long-term career? “It takes just one person to appreciate [my work] and the magic begins,” she replied.