Are you ready for ‘Asia’s Got Talent’? | Lifestyle.INQ ❮ ❯ 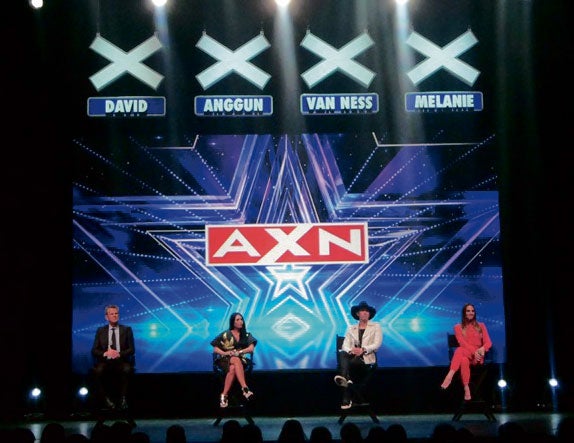 THE JUDGES will give their nods or X’s to wannabes starting March 12.

Are you ready for ‘Asia’s Got Talent’?

Weird costumes, strange acts and lots of talent. These are the things to expect from “Asia’s Got Talent” (AGT), say judges David Foster, Anggun, Van Ness Wu and Melanie C during the show’s launch on Jan. 27 in Marina Bay Sands Singapore.

The show is the 63rd adaptation of Simon Cowell’s “Got Talent.” This Asian version is probably the most ambitious yet, as contestants will come from 15 territories across the region. They will also have to rack in votes from audiences in different countries.

Local celebrities Marc Nelson and Rovilson Fernandez will host the show. The duo said that they have to be unbiased, since they cannot help but root for Filipino talents.

While they cannot reveal any specific details until the show premieres on March 12 on AXN, they said that the AGT judges spent more time on their feet, interacting with contestants.

“I do believe that some of the acts that we saw could easily go viral,” says Anggun.

Foster is hinted to be the judge who does not mince words when critiquing contestants.

In turn, he calls Anggun and Mel C the “Wicked Witches of the East and West.”

(Read “Melanie C: It’s quite a phenomenon that there are a lot of great singers from the Philippines”)

All three agree that Van Ness is the nicest to the contestants.

(Read “Van Ness Wu: Still a heartthrob after all these years“)

Their buzzers can end dreams, but it is the audience who still makes the ultimate choice of who becomes the show’s first winner.