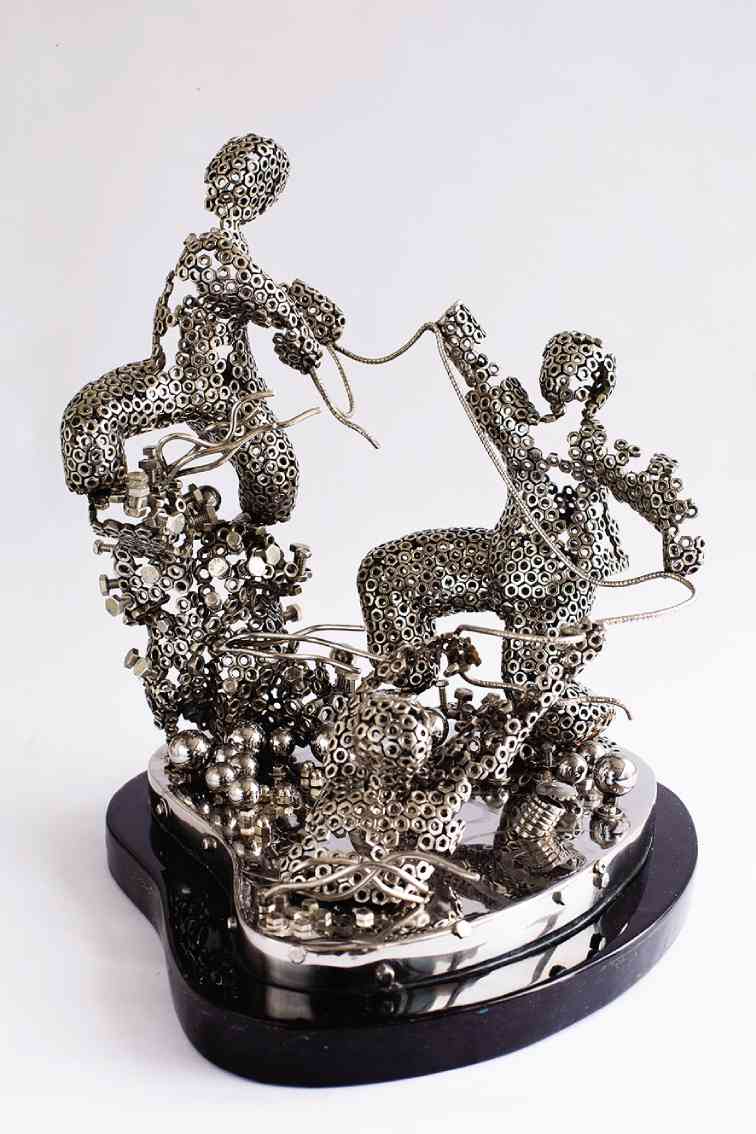 Pick up the pieces– turning junk into art

Jan Andrew Denila has a message: Let’s help each other and  get the country back on its feet after every crisis.

He didn’t need elaborate materials to convey his optimism. He used scrap and other found objects, transforming them in something beautiful and outstanding.

His work has won the grand prize in the sculpture category of the 47th Shell National Students Art Competition—the longest-running and most anticipated contest for young Filipino artists.

His entry, “Buuin Natin Ulit. Bangon Na, Sulung Na!” was his first-ever for the Shell contest.

The 26-year-old senior Interior Design student from the Philippine Women’s College (PWC) of Davao emerged victorious in a formidable category (which included an entry from the University of the Philippines Diliman) and impressed Filipino contemporary artists and competition judges Ral Arrogante, Junyee and Leeroy New.

“I formulate my ideas in a junk shop where I can easily compose artistic figures in my mind,” he said in an interview. “When I see a pile of junk with different shapes in front of me, I  imagine what my art will look like.”

Denila’s winning artwork is mostly made up of nuts and bolts. “I started by picking up some junk materials, and classifying them according to shapes and then material,” he described the process.

After deciding on an angle and visualizing his piece, he brought his draft to his small shop where he used a welding machine to assemble the pieces. He did it while praying to God for guidance; his attachment to his process was evident when he revealed its meaning.

“I dedicate my masterpiece to the ‘Yolanda’ survivors. The three figures symbolize the three islands of hope: Luzon, Visayas and Mindanao,” he said.

His sculpture shows how we all can help each other in times of dire need. “The drowning man represents ‘bangon na,’ while the man at the center holding the rope expresses ‘sulong na,’” he said. “The figure at the top is more complete compared to the two other figures—this time conveying the process of survival from tragedy to recovery.”

Denila earned well-deserved prizes of P60,000 in cash, a medal, and a plaque.

“Being a Mindanaoan artist, I dedicate my work to my countrymen, because for me, the soul of a real artist comes from his or her culture,” he said. “Culture develops values and inspirations—very important if you’re an artist.”

He believes that being an artist doesn’t only require skill; the creative process also involves the heart and mind.
“Before I started doing my piece, I made sure that I went through the process of feeling and thinking,” he said.

Denila is one of the artists-and-visionaries-in-the-making at PWC, where “design thinking” is said to be at the core of its art education. The student’s recognition nationwide also earned the PWC of Davao a citation for Excellence in Curricular Program of Study in Fine Arts.

The Shell competition was aptly titled “Art Spark,” symbolizing the new revolution in modern art forms. The contest received a record number of 1,600-plus entries across all categories.

The awarding ceremonies were held at the Ayala Museum in Makati.

“I believe that one of the roles of an artist is to contribute new ideas for change, to inspire people to innovate and to make impossible things possible,” he said. “I want to make something meaningful for humanity.”

The young artist wants to mount a solo exhibit soon and open his own furniture store—a one-stop shop for paintings and sculptures.

“I want to help my countrymen develop their skills, too. I believe that Filipinos are skilled and strong,” he said.

His vision for the country is reflected in the scraps of metal that are pieced together to form art that speaks from the heart and mind of its creator.