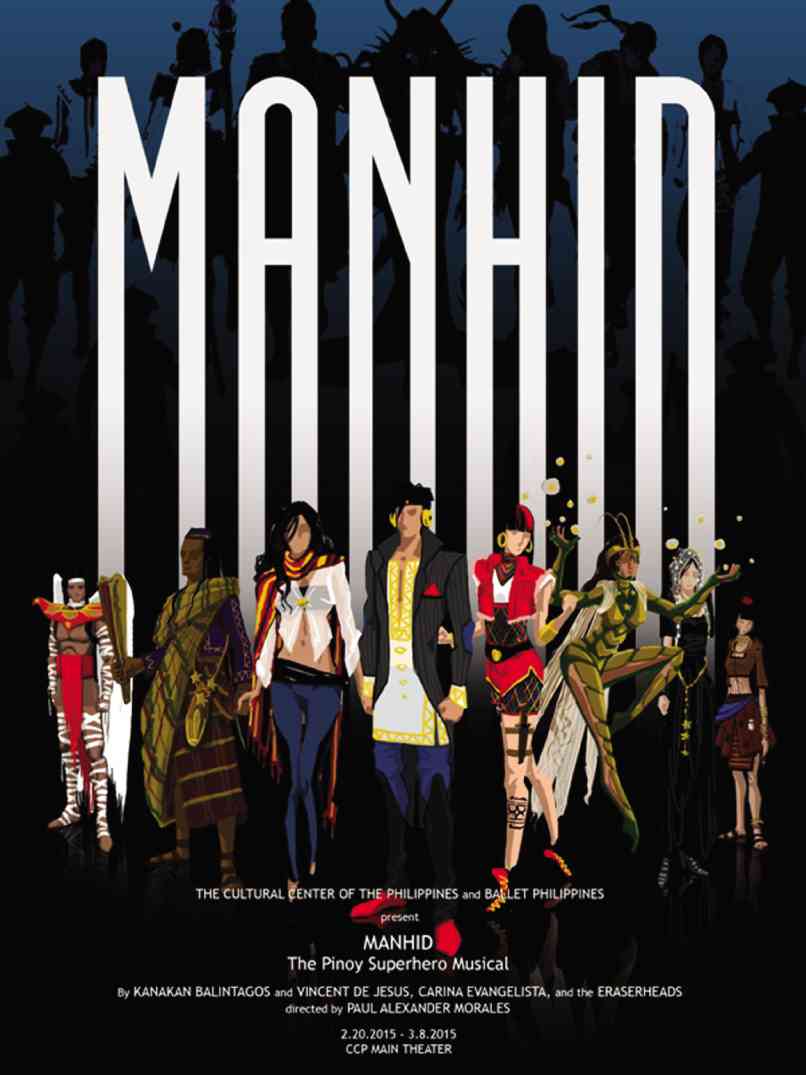 “MANHID” was written by Auraeus Solito, with music by Vincent de Jesus and Eraserheads, and direction and choreography by Paul Morales.

After 24 years, ‘Manhid’ returns to the stage

The experimental, all-student production “Manhid,” a dance musical and protest play, was first presented during the post-Edsa period in 1991, at the University of the Philippines-Diliman. Its chief influences included comic book and folk superheroes, and Salman Rushdie’s great novel “Midnight’s Children,” the Booker of all Booker Prizes, which was about the horde of children born at the instant India gained her independence from Britain in 1948.

The play was written by Auraeus Solito (now Kanakan Balintagos), with Vincent de Jesus and the Eraserheads collaborating on the music. Director and choreographer was Paul Alexander Morales, then a scholar of Ballet Philippines and now BP artistic director.

“The Probe Team” headed by Cheche Lazaro reported on this groundbreaking musical on superheroes and villains with magical powers, and on the perceived national apathy in the years after the 1986 People Power Revolution. The video was replayed at a recent press conference at the Cultural Center of the Philippines (CCP) announcing the restaging of the dance-musical after 24 years.

Shown were excerpts from the original “Manhid,” interviews with a young Morales and others connected with the show, and with writer Rogelio Sikat, then a UP dean.

The new and updated “Manhid: the Pinoy Superhero Musical” will be performed at the CCP for three weekends on Feb. 20-22, Feb. 27-March 1 and March 6-8.

The dance-musical play is all about the battles between two groups of superheroes, headed by the tabloid writer Bantugan Buenaventura and woman activist Lam-Ang Panganiban, against the supervillains led by General Apolaki Regalado, the Tulisan ng Bayan.

There is an epidemic to be unleashed, darkness and a crisis period, and finally an all-out battle between good and evil as the two forces fight for the future of the Philippines. The three parts of the play are based on comic-book classics. In between, there are a lot of songs and dances, and the message is to fight for your rights, defend the land and reject apathy.

During the press launch, the young and energetic cast performed production numbers and two sets of songs from the musical.

They are supported by a gaggle of Ballet Philippines dancers who take on the roles of comic book heroes and villains.

“It’s all about collaboration,” said Morales. “We would always come back to the play after four years. That’s why we are offering ‘Manhid’ again. It took 24 years for the cards to fall into place. We want to take to the new generation a more coherent version.”

Speaking for the youth, Martin said: “We should have a lot to do, a lot of things to accomplish in our society. Sana (hopefully) our generation can provide for the needs of the next generations.”

Magno, a TP Actors’ Company member, observed that “hindi mo alam kung sino ang kalaban (you don’t know who the enemy is). This show will help steer us in the right direction.”