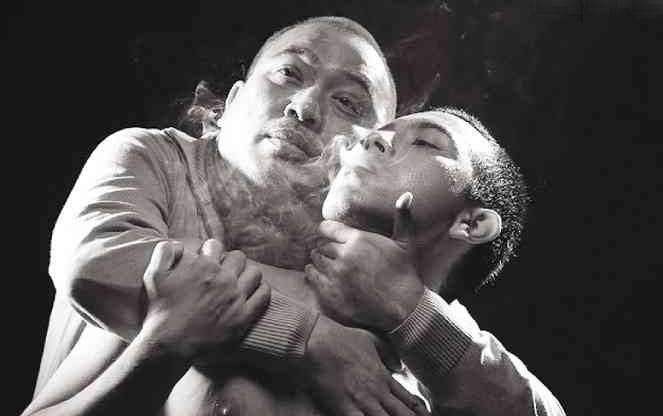 “Being an actor in the theater was never in my dreams. I was too shy to be onstage. Stage fright to the max,” confesses Melvin Lee, who tackles the role of Jean Genet, in Dulaang UP’s (DUP’s) “Bilanggo ng Pag-ibig,” opening Feb. 11.

“But having seen the value and the power of the medium made me realize that I can probably be part of this very dynamic movement called ‘theater.’”

The book was published posthumously. Genet passed away in 1986, collecting his manuscripts on his encounters with the Palestinian Liberation Army in the Middle East.

The play is set in the last days of Genet’s life, holed up in a small hotel in Paris, battling throat cancer while frantically trying to finish writing his last masterpiece. He converses with his friend Leila Shahid (alternately played by Tess Jamias and Dolly de Leon), later to become the general delegate of Palestine to the European Union.

The play seeks to “understand and portray Jean Genet’s imagination as well as his controversial insights on revolution, betrayal and deceit, homosexuality, violence and love.”

Blanking out and maturing

“I got rid of the stage fright by constantly being onstage doing plays,” says Lee.

“I was invited to join the Philippine Educational Theater Association in the ’80s by my high school classmate, Angie Cantero, who was part of Metropolitan Teen Theater League, the youth arm of Peta,” Lee recalls. “My first assignment was to be part of the music pool of the play  ‘Samperang Muta,’ directed by Ces Mangay-
Quesada. The music was live instrumentation and the musical director, Chino Toledo, had us use junk objects as instruments. I was in charge of blowing on the Coke bottles.”

Lee was also tasked to do stage management and production management for various plays. “I received enormous training when I would be cast as part of the ensemble in productions. It helped me mature as an artist,” he notes.

“One time in the ’80s, I was part of this group scene in a touring production of ‘Panata sa Kalayaan’ that we did in Switzerland. We were acting as different news reporters with his or her own report. I totally blanked out. I tried to save myself but all I could say was, ‘Mmmmm.’ Kaloka!” he says, laughing.

Lee was eventually cast in roles like Inao in “Diablos,” Diana Ross in “Kung Paano Ko Pinatay si Diana Ross” and as Chelsea in “Care Divas,” among others. For his role as Chelsea, Lee received the 2011 Philstage Gawad Buhay! for Best Actor in a Musical.

Lee, who alternates with Ernesto “Jojo” Cayabyab III in the role (recent credits include Theatre Movement Bazaar’s “Anton’s Uncles”), has performed with DUP in the past.

“I did ‘Divinas Palabras,’ also directed by Jose; ‘Baclofen’ directed by Alex Cortez; then the  ‘Kangkong 1896’ remount directed by the late Ogie Juliano.”

In preparing for his role, Lee has been reading books and watching as many videos as possible of Genet. “Also, I try to cull from the previous callouses of my life to approximate the complexities of this very esoteric, deviant character named Jean Genet.”

On acting as a person who actually existed: “At the end of the day, our task as an actor is to come up with our interpretation based on the text and other pertinent info about the ‘real’ character. We cannot be the real person, but what we can offer is a different insight or try to get the essence of his being… That’s the  challenge.”

Aside from researching about Genet, Lee has also been brushing up on the history of the conflict between the Israelis and Palestinians.

He points out: “One of Genet’s important ‘causes’ is the Palestinian revolution. Because they were displaced, all of a sudden, this entire race has become refugees. They no longer have land to call their own—hindi ba malapit ’yan sa walang kamatayang conflict sa Mindanao?”

Pinoys, says Lee, “should care about the conflict in Israel because we are indirectly affected by that war: oil, OFWs and the whole concept of terrorism.

“It’s worrying when we hear of news about bombings. Our psyche as a people is affected because we know that there’s a part in a world where people are dying because of conquest and oppression.”