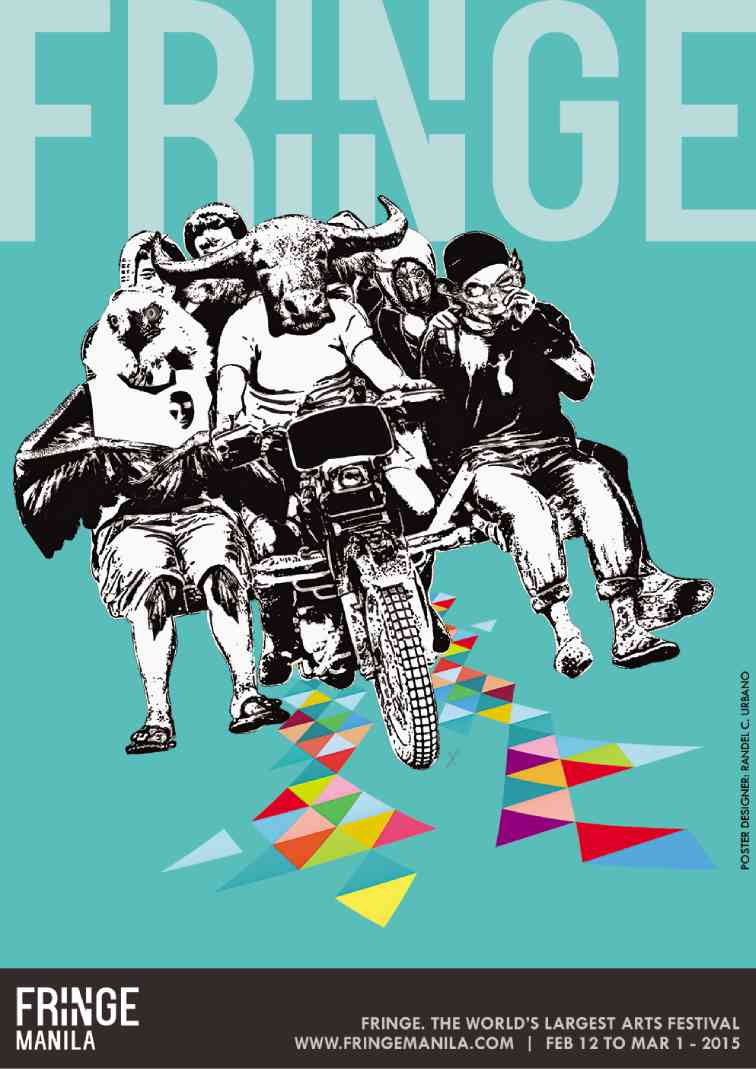 FRINGE Manila poster with the artwork “Habal-habal High,” designed by Randel Urbano of Vargas Museum, sums up the festival vibe: a crazy fun ride with some risks on the side.

Fringe is a global arts festival first established in Australia in the 1940s, and it’s about to happen in the Philippines.

The initial challenge for organizers Andrei Pamintuan and Brett McCallum of Fringe Australia was to explain what Fringe is to artists and sponsors.

People usually ask, “Is that on TV?” And a few misheard Fringe for French, asking McCallum, “You mean French Embassy, but why are you Australian?”

Welcome to Fringe Manila, the open-access, crowd-sourced multi-genre arts festival happening Feb. 12-March 1 all over the city of Manila. There will be plays, musicals, dance, comedy, improv, exhibits and pop-up performances, mostly from new artists and several universities. The call for participants was announced mid-last year, and from there, 60 companies made it to the 18-day festival, which will showcase 90 events and 300 performances, all happening simultaneously.

Ballet Philippines, meanwhile, will present “Manhid: The Pinoy Superhero Musical,” featuring the music of Eraserheads, with Radioactive Sago Project performing live in all the performances.

Since Fringe aims to coordinate performers, sponsors and the community into one cohesive program, there is no theme and there are no auditions.

But there is one central poster showing a habal-habal, a motorcycle overloaded with eccentric passengers (one has a carabao for a head, another carries a rooster with piercing eyes). The artwork, called “Habal-habal High,” was designed by Randel Urbano of Vargas Museum, and it pretty much describes how Fringe Manila is envisioned to be—a crazy, fun ride with some risks on the side.

It is a risk for festival director Pamintuan and executive producer McCallum to stage Fringe Manila since everything has to be done from scratch. Both have worked with Fringe abroad, where the brand has become well-known among artists.

But here, it’s all about introductions. Shows are also self-funded, meaning each production has to finance its own shows. It can decide if it will stage it for free, ask for donations or sell tickets—and for how much.

“We want them to be in charge,”
McCallum says. “They will have a venue for sure, and we’ll be there for the marketing, but they will run their own shows.”

Then there’s the overwhelming task of creating a schedule.

“Not everyone can produce their own shows, so some backed out. Then we had to find partner venues for the sure ones,” Pamintuan explained. “When we had that down pat, everyone now wants to have an 8 p.m. weekend slot!”

McCallum said Fringe Manila, for starters, is about building a profile. “This will be an annual thing, and next time we’ll be able to answer people when they ask, ‘what have you done?’”

So far, the team is done with the logistics, and it now has to develop an audience. Pamintuan says they’re expecting “students, hipsters, yuppies and arts aficionados” to watch the more mainstream shows, and take the risk in watching the lesser known ones—aside from braving Manila roads to get to the shows.

Events will be held in venues such as the College of St. Benilde (CSB) on Taft Avenue, Cultural Center of the Philippines, Fo Guang Shan Mabuhay Temple in Malate, Fort Santiago in Intramuros, Mabuhay Restop in Luneta and Sev’s Cafe on Roxas Boulevard.

Fringe Manila will also run through Valentine’s (and payday) weekend, Chinese New Year and National Arts Month, so it’s best to plan around the shows you want to watch. The Fringe team and volunteers will be stationed in their operations hub in CSB where we did this interview, and will be transferring from one venue to another throughout the festival.

“Maybe we should consider renting a tricycle?” Pamintuan says, laughing.

Maybe a habal-habal would do the trick.