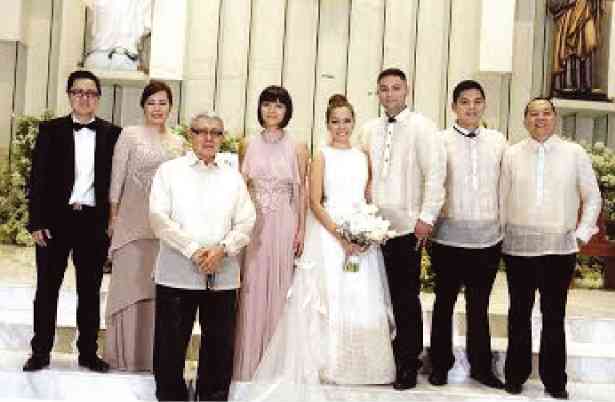 It was an afternoon wedding for pretty Christabelle Muertegui and Jose Francis Cañizares at the Redemptorist Parish in Cebu City. She is the daughter of engineer Domingo Muertegue and the late Helen M. Muertegui. Jose France, as they call him, is the eldest son of architect Jose Mari Cañizares and Marilou Rodriguez Cañizares.

Coming as they do from extensive and prominent families, there were lots of relations and a good measure of close friends at the rites, and at Chateau de Busay where the reception was held. Cocktails were at 5:30 p.m., followed by dinner in the upper hall.

Highlight was the toast to Joe France by his three younger brothers—international model Joe Vince, Jiggy and Kenzo Cañizares.

Joe France and Christa will make their home in Cebu, helping out in the family business. He is a real-estate agent; she, an interior decorator.

At about the same time that Joe France and Christa were getting married, another wedding was taking place at the chapel of San Pedro Calungsod at SM Seaside, South Properties, Cebu City.

What was the daughter of Cebu’s top couturier wearing for her wedding? A labor of love, indeed, made of silk cocoon with pale blush lining.

Five different kinds of lace were hand-appliqued. Some of it came from veteran Cebu designer Felix Yu, who had confected Arcy Gayatin’s wedding gown over 30 years ago.

The chapel was like a garden, devised by Teresin Mendezona, one of the principal sponsors. She used living uncut plants and full grown ficus trees. Teresin herself had grown the Alambrillo ferns that lined the bridal path.

At the altar there was a profusion of bougainvilleas in full white bloom, courtesy of dear friend Annie Osmeña Aboitiz.

The reception that followed was held at the Radisson Blu Hotel where cocktails and finger food were served at the lobby lounge as guests trickled in. It was one of those days when traffic was extremely slow.

Dinner was served up at the Santa Maria ballroom where an entire wall (56 x 17 feet) was covered with more than 800 white paper flowers. This was another labor of love by Cybill’s aunties Debbie Bontes and Boogie Ancajas.

Toasts and anecdotes were by maid of honor Vani Sathisan and Daniel Hannigan, one of the two best men. The other was Cybill’s brother Mic Gayatin.

Kevin and Cybill will make their home in Cebu, she and Kaye Sala are at the forefront of A-List, their efficiently run public relations concern.

One recent A-List event was the opening of an art exposition currently in progress until Feb. 10 at Qube Gallery in Henry Hotel. It is titled “Color Contrasts,” featuring the colorful works of Camille Ver in contrast with black-and-white works by Juvenal Sansó.

The exhibit marks the second anniversary of Qube Gallery, whose owner Maris Holopainen was present on this occasion, along with artist Camille Ver.

According to Vinnie Tan, curator of Qube Gallery, Camille, born in 1980, is considered one of the foremost contemporary abstractionists in the Philippines. She has had nine solo shows.

We have been told that perhaps the next exhibit of Qube Gallery may be at a new location, at the Crossroads complex, also in the Banilad area of Cebu City.

Speaking of art exhibits, there is a very important one up to Feb. 28 at the North Wing Atrium of SM City Cebu. It is presented by the Sacred Heart School for Boys Batch 1985 Foundation.

Simply titled “Abellana,” it is a retrospective on the life and art of the late eminent Cebuano painter Martino Abellana. He was a pupil of Fernando Amorsolo from whom he learned how to paint luminous landscapes, scenes of Filipino life (in this case Martino’s native Carcar in southern Cebu), and portraits that are treasured by Cebu’s top families.

And still on the art scene, opened last Thursday was the exhibit by Wayne Lacson Forte at the 856 Gallery with a cocktail reception at its premises in Business Walls, A.S. Fortuna.

Jing Ramos is one of the co-owners, with Pia Mercado as the gallery manager.