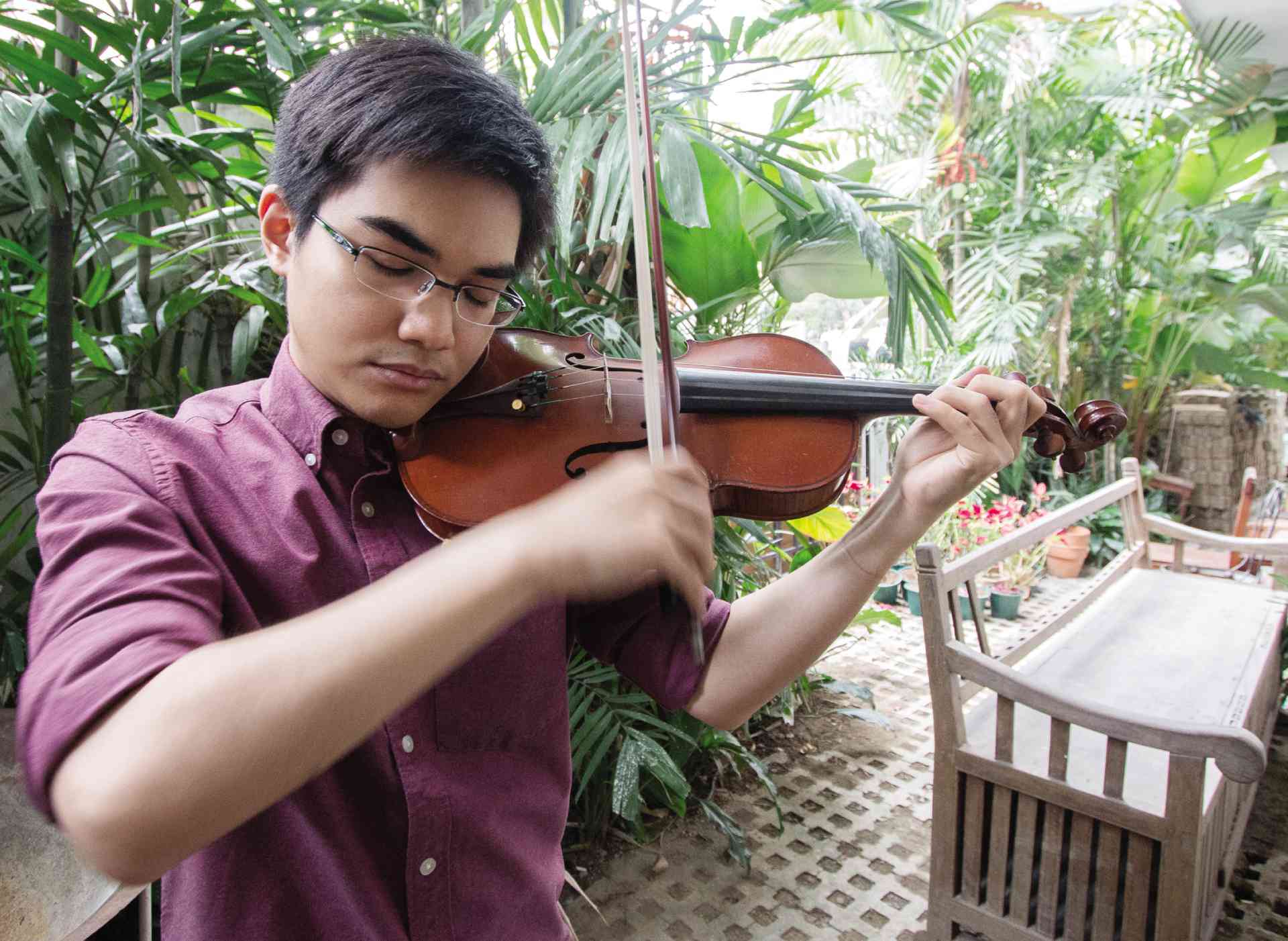 GUTIERREZ was the only non-Chinese in Zakhar Bron’s master class of 25.

‘Chino’ Gutierrez gets his wish: Master class under Zakhar Bron

Violin virtuoso Joaquin Maria “Chino” Gutierrez, the young man who first wowed the late maestro Oscar Yatco when he was a mere child of 9, was only coming home for the Christmas holidays last year when he received a most unexpected e-mail on the flight back home.

It was a letter from the office of the sensational violin pedagogue Zakhar Bron, announcing Gutierrez’s selection to attend his prestigious master class at the Central Conservatory of Music in Beijing, China. On top of that, he was also chosen as one of the recipients of the program’s scholarship.

For Gutierrez, who had been dreaming for years of coming under the Russian maestro’s tutelage, the master class was the perfect way to cap what turned out to be his most prolific year so far. He recalled applying for master class in Switzerland last October, but he regrettably had to pull out due to schoolwork and exams in Germany.

“They had my audition materials already so [I was] probably handpicked based on those,” Gutierrez said. He was the only non-Chinese of the 25 selected students.

Bron is the mentor to some of the world’s elite violinists, including Vadim Repin, Maxim Vengerov and David Garrett. He teaches at conservatories in Zurich, Switzerland; Cologne, Germany; and Madrid, Spain; and holds master classes in the United States, Asia, South America and Europe.

A 45-minute private class with Bron costs 1,500 Euros. Gutierrez was granted two lessons. (A Chinese student who took the master class with him was granted only one lesson. Bron, said Gutierrez, decides on how many lessons each student receives.)

“The experience was exhilarating and terrifying, like a roller-coaster ride where you have the thrill and the sense of danger,” Gutierrez said. “I’ve been among this select Chinese group of musicians whose average skill is so high you can give him or her a career already here in the country or even abroad.”

The class was even more intimidating, he said, as the students received their lessons in front of a very critical and highly competitive audience composed of students, professors, parents, music enthusiasts and just about anyone who happens to drop by the auditorium.

When Gutierrez went up the stage to receive his lessons, Bron, who perhaps momentarily was unable to reconcile his looks with the rest of his students, asked if he was Chinese or Spanish. His heart swelled up, he raised his chin just a tad higher and proudly proclaimed, “Filipino!”

Bron spoke to the audience in Russian translated to Chinese by an interpreter. Luckily, Gutierrez was able to understand a few Russian phrases. One of his teachers in Munich was a Russian, so he was able to glean about 20 percent of what Bron was saying, he said, laughing.

The lessons, however, were spoken in German, one of the languages Gutierrez is fluent in. Gutierrez speaks five languages, including Latin (“it’s getting rusty”) and ancient Egyptian (“one of my hobbies when I was young”).

When attending master class, students always bring pieces they’ve played over and over so that they can gain new insights on how to further perfect the music. Learning music under a perfectionist like Bron, however, is like learning painting from Rembrandt and discovering new pigments, or a sfumato technique that draws in the viewers.

“It’s down to the smallest details with Bron: ‘You vibrate on these small notes because this one is leading to the dominant.’ Most violinists focus on the intonations and dynamics of the bow work, the two very labor-intensive things about the violin, and take for granted the vibrato. But Bron is very particular with the vibrato that he analyzes a piece in terms of vibrato,” he said.

Vibrato is the pulsating effect you hear when you listen to the sound of the violin. Think Itzhak Perlman’s “Schindler’s List Main Theme.” Learning when to use vibrato is like learning which syllables to stress in a poem—it can lose its impact when applied all the time.

“You have to learn to use it sparingly and judiciously. Even for just a five-minute music, one must be able to perform it flawlessly on stage. In baseball that would mean a batting average of 95 percent—and it must be that way always. That means hours and weeks and months of hard work,” Gutierrez said.

In the streets of Beijing, he said, people accord respect to musicians. Gutierrez said he was overwhelmed by the Chinese government’s all-out support for the arts in Beijing. He said that he hopes the Philippines would also hold classical musicians in high esteem.

Just before he left for the master class, Gutierrez last December paid tribute to the late Yatco in a concert held at the Cultural Center of the Philippines. He played Pyotr Tchaikovsky’s “Memories of a Dear Place” whose three movements, Gutierrez said, mirrors the late maestro’s personality.

The Scherzo, for instance, is fiery, just like Yatco, while Mélodie is very romantic. “This is the more personal side of Yatco that I was privileged to be able to witness,” he said. It was also Yatco who encouraged Gutierrez, then 9, to study in Germany. Four years later, at 13, he accomplished this ambitious feat.

“Getting a bachelor’s and master’s degree isn’t just about learning techniques. It’s also about music theory, history, and learning prevalent styles during this composer’s life, what he was going through and the people he was dedicating his work to. Then you must find out how to make it your own by inserting your personal touches, because that’s what makes musicians stand out—how you connect with the audience,” he said.