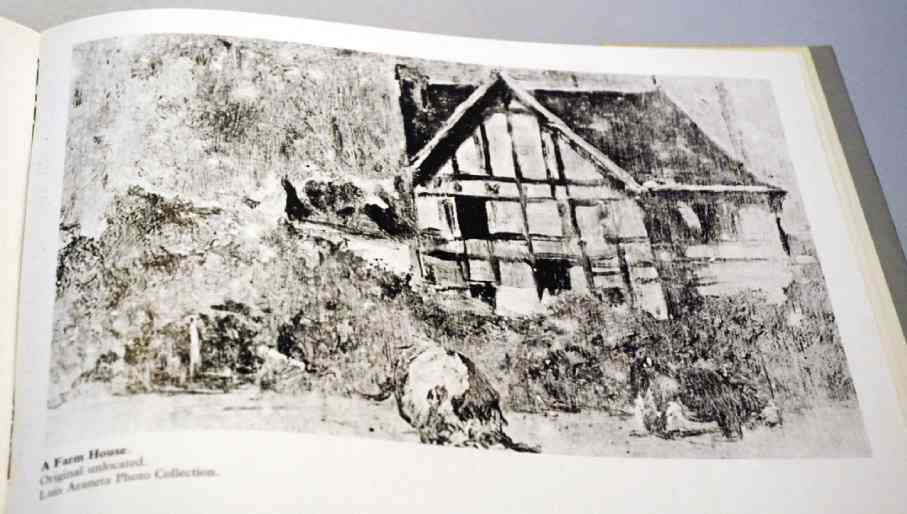 THE BLACK AND-WHITE photograph of Juan Luna’s “A Farm House” in the book published by the Lopez Museum. The painting was described as “unlocated” when the tome saw print in 1980.

Two cows graze on the foreground of the relatively small 10.5 x 11 inch painting.

Foliage scuffed by confident brushstrokes dominate the lower half and would have covered the yellow house that looms right of center of the frame had a faint line of laundry set out to dry not blocked its way.

The sky, meanwhile, is a bleak mix of gray and purple.

Richie Lerma, adviser of Salcedo Auctions, took note of these details. He was told that Juan Luna did the oil-on-wood brought over by a business associate acquainted with the family that now owns the painting.

It came with another painting, a Fabian de la Rosa oil-on-canvas inherited by the same clan from an ancestor who was a friend of the artist. In fact, the De la Rosa is inscribed with a dedication to the original owner at the bottom portion of the work.

Lerma, however, was obviously more intrigued by the Luna, particularly with the colors used.

“When I first saw it, I hadn’t seen this kind of Sicilian yellow this strong in Luna’s works,” he said, referring to the color used on the two-story farmhouse that was the main subject of the artwork.

“This kind of green called viridian,” Lerma said of the grass and hedge in the painting, “I had seen in some [of Luna’s works].”

Lerma said, however, that it was the “assured” way that the “impressionistic daubs” were made to suggest the cattle that set his heart beating faster.

“My initial reaction was that there could be a possibility that it [really] was a Luna because of [these] brushstrokes… Those kinds of impressionistic daubs, I thought, were very Luna, these kinds of streaks,” he explained, while motioning how those strokes would have been done.

But it was expected of Lerma to treat the painting with prudence, especially since many people come to him claiming to own a work of this or that old master.

“Anything brought here, I treat with respect,” he said. “Of course, style is one thing you consider when you’re checking on the authenticity of a work.”

Lerma noted that the signature that appeared on the bottom right of the piece “was written in quite an assured manner. Other [signatures] are quite thick. This was done in a sort of like a loose, confident manner.”

Lerma’s next question was, what kind of landscape was in the painting? Definitely not Spanish, he thought, although Luna stayed for long periods in Spain.

Lerma surmised that the architecture of the farmhouse was northern European. Which made sense because Luna stayed for some time in France.

“He did have a series of works done in Normandy,” Lerma thought.

Lerma said the book served as the standard when it comes to scholarly research about the artist.

Lerma began leafing through the section about Luna’s works while in France— leisurely at first, until he began recognizing scenes of Normandy.

“One painting was of [Luna’s wife] Paz Pardo de Tavera castigating their son who was crying in a corner. And then I started seeing all these Normandy scenes, the beaches and then, oh my God! The houses, the architecture, the stone architecture with all these kinds of details…” he trailed off.

Suddenly, Lerma said his eyes landed on a black-and-white photo of the painting at hand, its caption read: “A Farm House/Original unlocated/Luis Araneta Photo Collection.”

Turns out, a photograph of the painting was taken in the early 1900’s “and would have been from the collection of photographs of Luna artworks” of art dealer/historian/scholar Alfonso Ongpin.

“The painting had been passed down to the generations, and [the owners] had no idea. They did not know that it was backed by photographic documentation,” he added.

Lerma admitted that, at some point, it crossed his mind that somebody had seen the black-and-white photo and did a copy.

However, the black-and-white stopped at the cattle, excluding certain portions of the painting, particularly the bottom where Luna’s signature appeared.

If he were looking at a copy based on the black and white, the painting in front of him would have stopped at the imaginary horizontal line cutting the cows in half and leaving the rest of the bottom portion out of the frame.

Besides, all details in the photo are as how they appear in the painting. Down to the strong white square floating just above the hedge in front of the farmhouse that, Lerma said, could be linen hung out to dry.

The fact that the pigments remain very vivid to this day is testament to Luna’s use of quality materials from the period. Lerma said that the painting is well preserved “because it had been under glass all this time.”

The Luna and the De la Rosa will be showcased along with other significant works of local masters in the “Important Philippine Art” auction to be held on March 7, 2 p.m. at Salcedo Auctions’ saleroom at Three Salcedo Place in Makati City.

Lerma said the official preview where patrons will be able to see all the pieces on offer begins on Feb. 14, also at Salcedo.

Worth checking out are Fernando Amorsolo’s works, particularly “Dalagang Bukid;” a large oil-on-canvas by Fernando Zobel; and an eye-catching H.R. Ocampo titled “Pagoda” that played a cameo role in the Lorna Tolentino-Christopher de Leon starrer “Kislap sa Dilim” shown in 1983.

Lerma said works by Ramon Orlina and Arturo Luz would be offered to benefit Ballet Philippines.