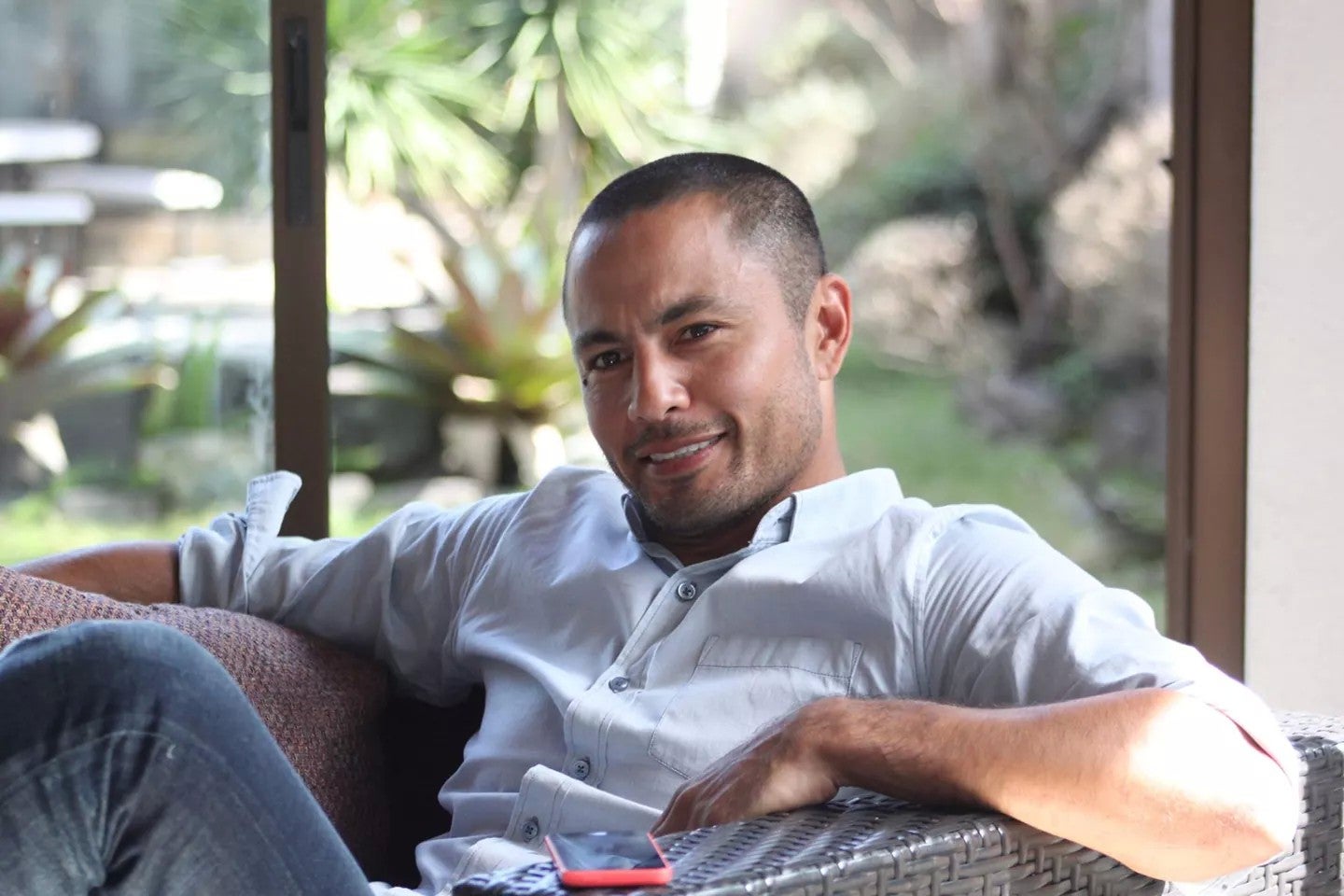 It was Feb 2. and Derek Ramsay didn’t have Valentine’s Day plans yet. “I’m making them. Nothing solid right now. Shucks, I don’t remember the last time…” he said, trailing off.

But is he really a Valentine’s Day kind of guy? “I like to be different. Like when I was with Angel (Panganiban), Valentine’s was the day we’d go and throw a party for homeless kids… We all know it’s a day made by Hallmark. Every day should be Valentine’s Day. Spread the love every day.”

Derek spread the love on “English Only, Please,” his first foray into romantic comedy, which won him the Best Actor award at the Metro Manila Film Festival in December last year.

“I used to be the other guy, then it became me with two girls fighting over me,” he said.

How many times did that happen?

“Too many times,” he said, smiling.

His chemistry with co-star Jennylyn Mercado (who also won Best Actress) lit up the big screen.

Asked if he’s happy with being the new rom-com guy, he said: “It’s kind of weird that you get the young guys now with their love teams and it’s just really cute… you have Daniel Padilla and Kathryn and then you have James Reid… and then here, suddenly, you have Derek and Jennylyn. Sabi ko kay Jen, ‘Grabe, ha.’ It just goes to show that everybody, it doesn’t matter what age you are, you fall in love, you get kilig at whatever age.”

We were in a house in Taytay, Rizal, on the set of “Mac and Chiz,” his new comedy show for TV5. “It’s my first time to do comedy. I’m nervous but I’m getting the hang of it. I have great comedians to learn from, John ‘Sweet’ Lapus and Empoy who’s just naturally funny,” he said.

It was an exciting day for Derek. That evening, the first episode of “Extreme,” his other TV5 show, was going to air. He said, “That’s Derek. We’ve done some crazy stuff already, and some of the stuff was my idea to make it even more extreme… No safety harness, no nothing, and I agreed to do it. There was one stunt where we had a guy on a BMX ramp over a van, and I said, ‘Can I lie down on top of the van with a GoPro?’”

Derek has a lot more in store for his fans this year. There are talks about a sequel to “English Only, Please” as well as a film called “Pangil” with director Toto Natividad. He’s also about to start shooting “Mandirigma,” a film directed by journalist Arlyn de la Cruz.

“It’s a Marines movie. It’s pretty sensitive,” he said, “with what just happened. It’s unbelievable, it’s crazy. These guys are out there to protect and serve our country and to be brutally… I want to get more into my character and give my character justice for them. It’s not something I can take lightly and see if I can wing it. It’s a very touchy issue.”

Another rom-com is in the works, co-starring Kris Aquino and Eugene Domingo, and with Chris Martinez as writer and director.

Given Derek’s passion for new things and the extreme, we thought he’d be up for our little challenge. 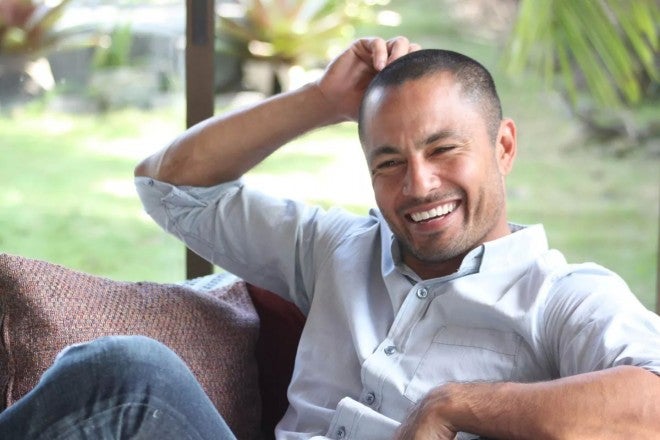 “Here’s where it gets a little crazy,”we said.

“We don’t know if you’ve heard about this, but over 20 years ago, there was this psychologist who came up with a set of questions and said that if two people answered them and stared into each other’s eyes for four minutes, they could fall in love,” we explained.

Dr. Arthur Aron’s study has been resurrected in “To Fall In Love With Anyone, Do This,” Mandy Len Catron’s essay in the New York Times’ Modern Love column. The questionnaire has been making the rounds online.

We whipped out a copy and said, “We want you to answer some of the questions.”

Given the choice of anyone in the world, whom would you want as dinner guest?

There’s so many. Um… anyone in the world?

Dead or alive? Oh, wow, you just made it so much harder…

Okay, let’s stick to people who are still alive.

I’m thinking… My gosh… This is so hard… I would invite Michael Jordan… Obama… I think the Obama thing, he wouldn’t be too happy with the questions I’d have to ask. Michael Jordan because I completely respect what he did as an athlete. Take away everything else he’s done in his life, but as an athlete, even though I wasn’t a big fan, just how he took care of himself… how he was able to stay that long in the NBA… I respect what he did for basketball… It’s weird because basketball is not my favorite sport, but I think he is the perfect role model. I have so many questions I have to ask him.

Before making a telephone call, do you ever rehearse what you are going to say?

What would constitute a “perfect” day for you?

When I can go to sleep knowing that I was productive.

When did you last sing to yourself?

OMG. Is this included—where I sing and somebody else is just there and I’m not… 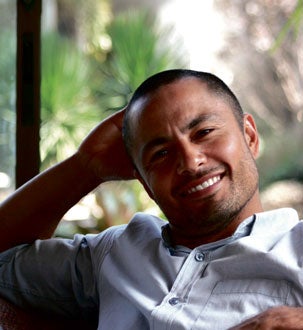 If you were able to live to the age of 90 and retain either the mind or body of a 30-year-old for the last 60 years of your life, which would you want?

Oh. I’d have to choose the mind. If you have the body but your mind’s gone, then life is useless.

Do you have a secret hunch about how you will die?

For what in your life do you feel most grateful?

If you could change anything about the way you were raised, what would it be?

If you could wake up tomorrow having gained any one quality or ability, what would it be?

If a crystal ball could tell you the truth about yourself, your life, the future or anything else, what would you want to know?

I would throw the crystal ball out the window. I don’t want to know anything. I’ll figure it out myself.

Is there something that you’ve dreamed of doing for a long time?

Why haven’t you done it?

Because other opportunities presented themselves and I was brought up to think that if an opportunity is given to you, grab it. 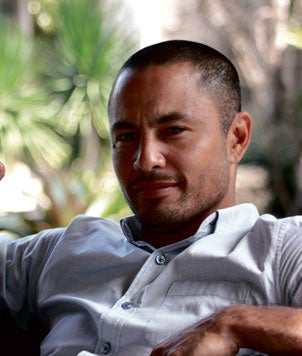 What is the greatest accomplishment of your life?

What do you value most in a friendship?

What is your most treasured memory?

Wow… Every Christmas with the family all together.

What is your most terrible memory?

Um… breaking my arm. It was disgusting.

If you knew that in one year you would die suddenly, would you change anything about the way you are now living?

What does friendship mean to you?

Again, my favorite part about it is loyalty. Loyalty and trust.

What roles do love and affection play in your life?

It’s everything about me.

How close and warm is your family? Do you feel your childhood was happier than most other people’s?

How do you feel about your relationship with your mother?

She is my best friend. Complete this sentence: “I wish I had someone with whom I could share…”

I wish I had someone with whom I could share my bed. (Laughs)

Uh, so many. My gosh. High school. I accidentally passed wind in front of the entire… I think it was grade 10. I was running into the classroom and then boom, sa harapan pa ng crush ko. The sad thing there was… I followed through (Laughs). No one knew. Except me. But there was a bit of moist… residue.

It was a shart.

When did you last cry in front of another person?

When was the last time you cried by yourself?

Around that time, too. 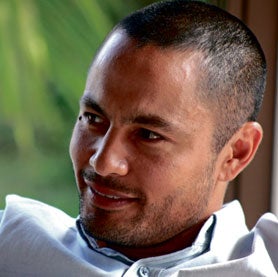 What, if anything, is too serious to be joked about?

So many questions about death but… if you were to die this evening with no opportunity to communicate with anyone, what would you most regret not having told someone?

Wow. How much I love them.

Why haven’t you told them yet?

Because I didn’t know I was gonna die. (Laughs)

Your house, containing everything you own, catches fire. After saving your loved ones and pets, you have time to safely make a final dash to save any one item. What would it be?