‘In the Heights’ and ‘Godot5’: Promise and ambition on the Ateneo stage | Lifestyle.INQ ❮ ❯ 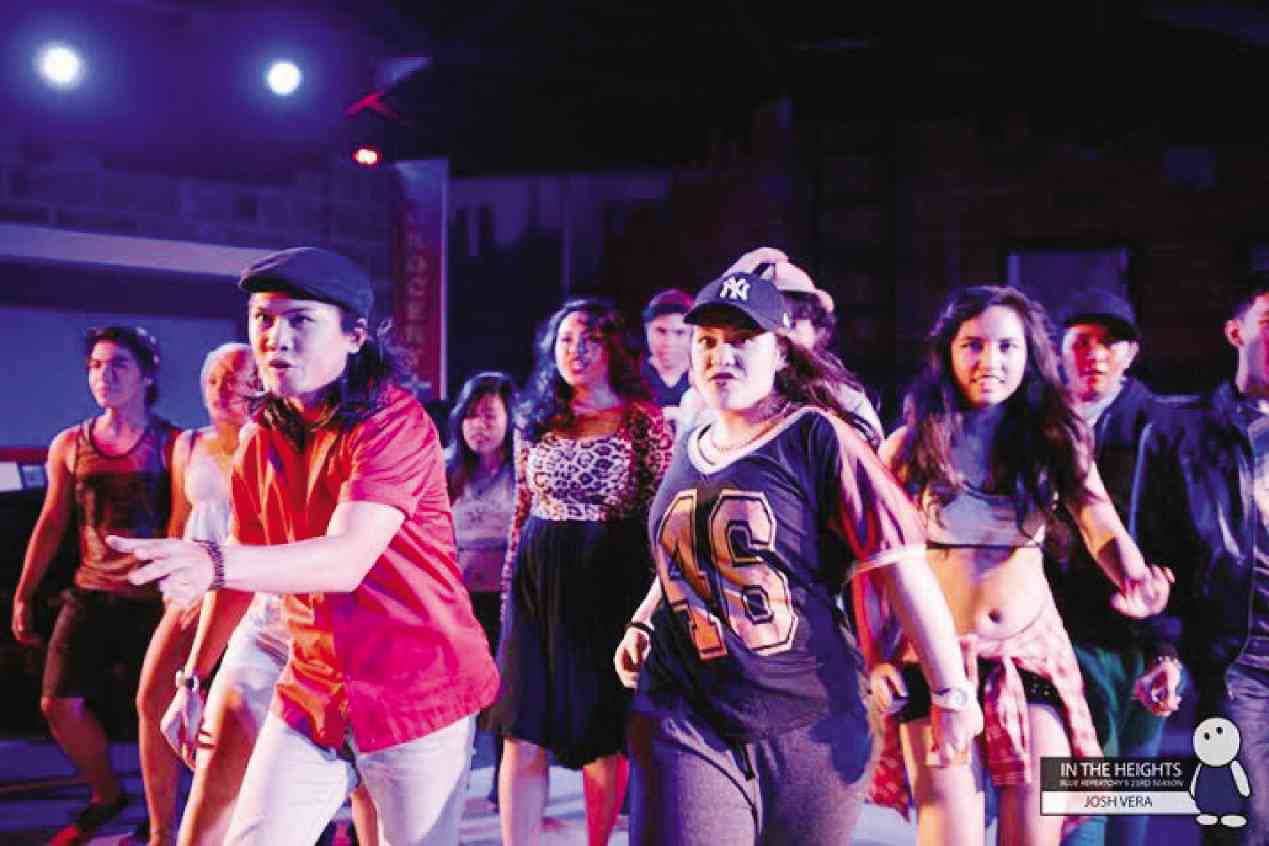 ABOVE: Scene from Ateneo Blue Repertory’s production of “In The Heights,” directed by Raflesia Bravo and Ciary Manhit. Left, scene from the “College GraduatesWaiting” set of Tanghalang Ateneo’s “Godot5: Five Ruminations on Samuel Beckett’s ‘En Attendant Godot’” "IN THE HEIGHTS” PHOTO BY JOSH VERA; “GODOT5” PHOTO BY INNA ABROGENA

‘In the Heights’ and ‘Godot5’: Promise and ambition on the Ateneo stage

If you want an evening of genuine surprise at the theater, the kind that makes you go, “I never thought they had it in them,” then the Ateneo is the place to be these days, where Blue Repertory’s “In the Heights” and Tanghalang Ateneo’s adaptation of “Waiting for Godot” prove nightly that youth and inexperience are never hindrances to putting up a show whose quality matches its ambition.

(Disclaimer: Both are being reviewed here based on performances during their opening weeks.)

Between the two, “Heights” comes across as the bigger, unexpected surprise. It has no big names attached to it (the closest should be 2014’s breakout theater composer, Ejay Yatco, who serves as musical director). Almost all of its cast are still in college. And it has Atlantis Productions’ still-fresh, formidable production of the musical three years ago for people to compare it to.

Yet during its finest moments, one can only gaze wide- and slightly teary-eyed at the wonders this nonprofessional production has made out of the Tony-winning musical about the life and times of a Latin-American community in New York City. Over the imperfect proceedings of BlueRep’s season closer, a uniquely Latino spirit sparkles over what should be the company’s most promising work since its staging of the coming-of-age musical “Bare.”

Sure, the accents are imperfect (better done without, actually). Some of the actors struggle with their songs and some with the roles themselves. The blocking of certain scenes can get pretty awkward (no small thanks to a stage of bizarre dimensions).

But those are only to be expected for a student production of a show that’s as foreign and culture-specific as they come. And yet, one just has to laud how codirectors Raflesia Bravo and Ciary Manhit’s cast have risen to the two-fold challenge of recreating the community at the heart of the musical while putting their recognizable individual stamps on the characters, no matter the myriad of inconsistencies.

When it closes next Saturday (Feb. 21), this “In the Heights” will be remembered foremost for discovering a bright talent in Chuckie Campos Juan, who nails the part of Usnavi, the bodega owner who anchors the show as its narrator and sings all of his songs in cascading rap. Safe to say, Lin-Manuel Miranda, the originator of the part (apart from being the musical’s creator), and Nyoy Volante, Usnavi in the Atlantis version, have found a compadre in Campos Juan.

The rest of the cast just need, to use the current layman expression, a little more “push,” a bit more time for discovery and ripening: EJ Pepito as the homely community matriarch Abuela Claudia; Krystal Kane as Nina, the first in the hood to go to college; Bela Yatco as Vanessa, who dreams of moving to the Upper West Side; Moira Lozada as the brassy, gossiping salon owner Daniela; and Abi Sulit as Nina’s mother.

When they all come together, harmonizing and dancing to Bravo’s dynamic choreography (as in the final electrifying sequence called “96,000,” in reference to the lottery ticket prize that plays the most pivotal role in this sentimental story), this “Heights” comes pretty close to resembling the work of the big leagues.

Similarly packing up next Saturday is “Godot,” or as it is formally billed, “Godot5: Five Ruminations on Samuel Beckett’s ‘En Attendant Godot.’”

And Tanghalang Ateneo kids you not; it has indeed prepared six sets of casts to interpret what was voted by a British Royal National Theatre poll at the end of the last millennium as the “most important play of the 20th century.”

For the most devoted theatergoers, that would mean enduring Beckett’s two-hours-plus-long, brain cell-draining dramedy, where the characters Estragon and Vladimir just talk and talk and talk (and also deal with a rather strange pair in the form of Pozzo and Lucky), six times(!)

It’s a test of stamina, really, and of one’s ability to indulge this rather time-consuming gimmickry (and we haven’t even mentioned that Saturdays mean four consecutive performances from different sets). And the gimmick is all in the reading, or in how the sets are billed: “Men waiting,” “Women waiting”—you get the drift.

Yet, judging by the version being reviewed here (“College graduates waiting,” the performers garbed in raggedy togas), the first thing that comes to mind in describing this “Godot” is “mesmerizing.” That could only mean that director JK Anicoche and his team have succeeded in fleshing out this play for what it truly is: an experience that seeks out to hypnotize and exasperate at the same time.

Joe-Nel Garcia maximizes his skills as a physical actor to make for a gritty, earthy Estragon; Cindy Lopez’s Pozzo is a demanding, stuttering young lady reminiscent of Rachel McAdams’ Regina George in “Mean Girls”; and Gel Besa lands some of the biggest laughs as the robotic, one-time oratorical Lucky. (Only Chris Dagsil, as Vladimir, seems uncomfortable with his part.)

But the real star of this “Godot” is Guelan Luarca’s translation of the text; it shimmers with a distinctly Filipino sensibility, the absurdity preserved, the crassness magnified, the rollicking dialogue pared down to more relatable conversational form. Luarca’s writing makes it irresistible to see how the five other sets of actors would tackle it.

Which brings us to a most alarming fact: The Ateneo really needs to build a new theater, one that’s technologically and dimensionally sufficient, to house the considerable number of productions churned out annually by its student-run theater organizations.

That “In the Heights” and “Godot” must contend with the low-ceilinged, ill-proportioned Rizal Theater and the drab Blackbox Theater, respectively, isn’t just a sorry sight; it’s dispiriting, like having planned out a hell of a party, only to be set up in some dilapidated hostel.