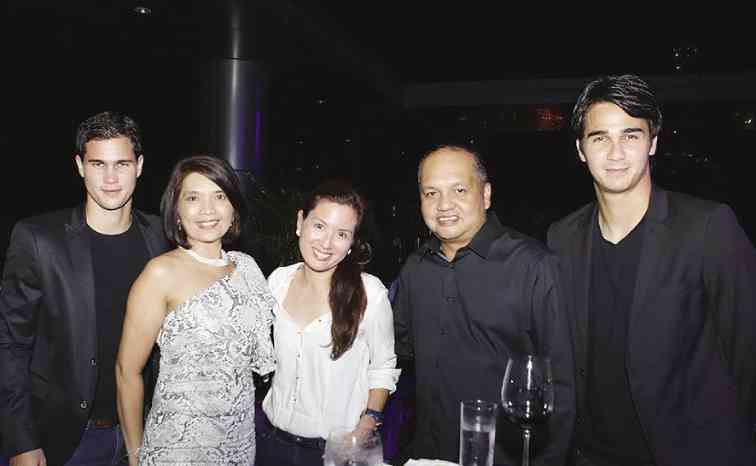 “It’s the most surreal feeling,” said Wilson. “It’s weird because it’s almost like I can’t remember life without it. It’s already our first year, and I was like, ‘What? How did that happen?’”

Heating up the night with music were DJs Nix Damn P! and Mikhail Schemm. Guests were served beer, sweets and burgers; they were likewise gifted their own pair of Sunnies sunglasses designed by doodle artists Rob Cham and Pete Rich.

A frosty dripping one graced the deck while golden letter balloons greeted the guests with: “The bubbly sheen the brand has always been known for.”

The anniversary bash was a spectacle, palangga, teeming with mood boards and Polaroid snaps. Wall after wall of images paid homage to the staff’s Pantone obsessions and lust for mid-century furniture, plus other daydreams.

Everything at the party was Instagrammable. It was no surprise the event caught attention on social media.

“This predilection for effortless cool is the ongoing romance that keeps the Sunnies sparks flying” said Wilson.

The shop now has 25 stations nationwide, with 125,000 followers on Instagram.

But dahlings, some guests whispered that they saw two people nonchalantly keeping the free Sunnies they were wearing into their pockets, and then asking for another pair that they then put on—ooops!

Citi Philippines and InterContinental Manila hosted lunch for the press and other guests to give details of a new trés exclusive offer for their valued clients, natch!

Cardholders of Citi Platinum, Citi Premier Miles Platinum and Citi Rustan’s Platinum who dine at InterCon’s Prince Albert Rotisserie and spend the required amount will be entitled to a one- to two-hour wine buffet with one companion at the hotel’s Gambrinus Bar.

At the launch, the lavish Salon Carlos P. Romulo inside Prince Albert was indeed a royal feast, dahlings.

“Our partnership with InterContinental Manila is only one of the many exclusive dining privileges offered to Citi clients,” said Citi Philippines CEO Batara Sianturi. “We are pleased to say this latest offer certainly meets that grade.

“The partnership provides a unique experience to cardholders, which they can appreciate with a family member or a close friend,” said Bea Tan, consumer business manager of Citi Philippines.

Seda’s party for a cause

At its glamorous roofdeck bar, Seda BGC Hotel hosted an auction for the benefit of the Center of Excellence in Public Elementary Education of the Ayala Foundation.

A Jaguar XF sedan at the hotel driveway  stood ready but only for test drives.

At Straight Up, doors opened to the fabulous throwback music by DJ Boyet Sison.

Perfect auction-openers were dates with football hunks James and Phil Younghusband, sending ladies in a “bidding war” for these hot men.

Meanwhile the gentlemen heavyweights with their clean portfolio soon went into action in their own competition, trying to outbid each other for premium Italian wines donated by Iphor Trading, as well as the to-die-for luxury accommodations from Ayala Land Hotels and Resorts Corporation, the owning company of Seda hotels.

Adding color and pizzazz were paintings from the “Metalscapes” series by Ivan Acuña. Scultpures by Ferdie Cacnio were also auctioned off.

It was an amazing night to remember, palangga, that Seda Group’s popular general manager Andrea Mastellone was extremely delighted and already looking forward to a bigger bash next year.

Seda BGC’s Party for a Cause was inspired by the Global Party started by British millionaire-philanthropists in London in 2011, and this year expanded to Asia, with Seda BGC the first hotel in the Philippines to participate. This was overseen by Genny Puno, Seda communications manager.