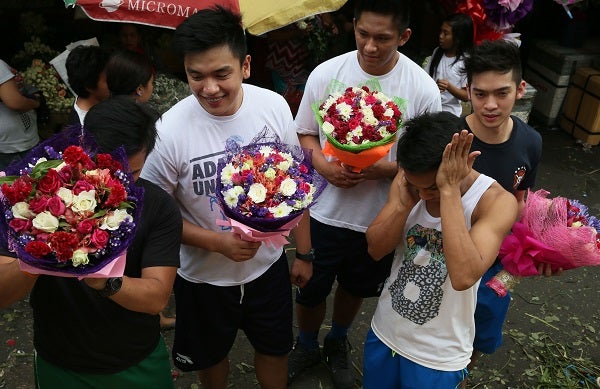 Filipinos buy flowers for their loved ones in celebration of Valentine's Day, Saturday, Feb. 14, 2015 in Manila, Philippines. AP

Filipinos most expressive about love among Asia Pacific countries—study

MANILA, Philippines—Have you been counting the times someone tells you that he or she loves you?

Filipinos are said to be the most expressive about love among their peers in the Asia Pacific, the results of a recent survey said.

In an online consumer research study called “The Truth About Global Brands” conducted by marketing firm McCann World Group, Filipinos claim to say “I love you” 17 times in a week, placing the country as the sixth most expressive among 29 countries included in the survey.

Chileans are said to be the most expressive among nationalities included in the survey, spewing out those three words 32 times in a week. They are followed by Colombians who say “I love you” 27 times, Argentines and Mexicans who say it 24 times, and South Africans at 18 times per week.

While people in South America tend to be more expressive, the Japanese are more careful to say the said romantic phrase, saying “I love you” only once a week.

Other countries who limit their “I love you’s” include Hong Kong and China, South Korea, and Singapore.

“This isn’t to say, of course, that these cultures are any less loving than the people of other countries, rather that some cultures tend to be less effusive,” the study cautioned.

In Japan, women buy sweets for men on Valentine’s Day

Flowers are good, but for romantics, love’s not just about that