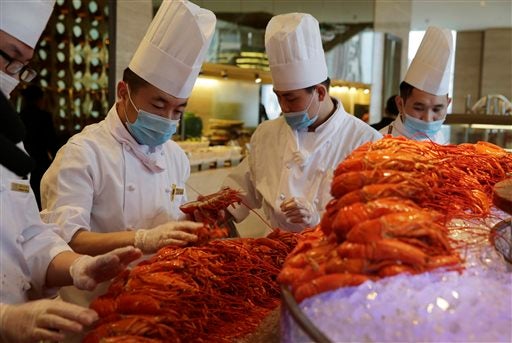 In this Feb. 9, 2015, photo, Chinese chefs prepare Boston lobsters at the Auspicious Garden restaurant in Pangu Seven Star Hotel in Beijing. Every morning the restaurant in Beijing receives 800 lobsters that have just crossed the Pacific aboard a cargo plane. In the evening, hundreds of diners fill the two-story restaurant in the gigantic hotel for a nearly $80 all-you-can-eat buffet with the New England specialty as the main attraction. AP

PORTLAND, Maine — Now on the menu in Beijing for Chinese New Year: lots and lots of American lobster.

Exports of U.S. lobster to China have rocketed in the past few years, largely to satisfy the appetites of the communist country’s growing middle class, to whom a steamed, whole crustacean — flown in live from the United States — is not just a festive delicacy and a good-luck symbol but also a mark of prosperity.

And that’s good news for Maine, far and away the No. 1 lobster state in the United States. The lobster boom has put more money in the pockets of lobstermen and kept shippers and processors busy during the usually slack midwinter months.

For Stephanie Nadeau, owner of The Lobster Co., a wholesaler in Arundel, Maine, the demand has meant 14-hour nights spent stuffing wriggling lobsters into crates so they can reach China in time for the Lunar New Year, which falls on Thursday. She said she sends 100,000 pounds a week to China this time of year.

“There’s lot of orders, lots of demand right now — it is a race to get them there for Chinese New Year,” Nadeau said.

On the other side of the world, every morning at 9, the Auspicious Garden restaurant in Beijing receives 800 lobsters that have just crossed the Pacific aboard a cargo plane. In the evening, hundreds of diners fill the two-story restaurant in the gigantic Pangu Seven Stars Hotel for a nearly $80 all-you-can-eat buffet with New England lobster as the main attraction.

Xu Daqiang, a 35-year-old businessman on a romantic date with his girlfriend, said food-safety concerns in China make him choose expensive high-class restaurants where he can find imported seafood.

Cao Lijun, a 24-year-old Shanghai resident celebrating her friend’s birthday, alluded to lobster’s reputed aphrodisiac properties with a laugh: “How to say it? It makes my husband healthier. Really, this is what we say, because it is high in proteins.”

Lobsters and other foods seen as luxuries are popular at Lunar New Year and other festive occasions. The bright red of a cooked lobster is considered lucky, as it resembles a dragon.

China also imports lobsters from Canada, Australia, South Africa, the Caribbean and elsewhere, but the market for the U.S. variety is exploding, with the demand strong year-round, not just at New Year’s.

For the Chinese, the preferred way of enjoying lobster is to cook it in plain water and then dip the pieces in soy sauce and wasabi. Another popular way is to braise it with green bean vermicelli noodles in garlic sauce, said Lv Hui, the cook in charge of the daily buffet at the Auspicious Garden.

Wang Kang, a marketing manager at Zhangzidao Group, a seafood distributor and processor in Shanghai, attributed lobster’s popularity in China to rising incomes.

New England lobstermen have been recording epic catches in recent years. Maine, which accounts for more 80 percent of all U.S. lobster, hauled in more than 250 million pounds in 2012-13, the highest two-year total in the record books, which go back to the 1800s.

Chinese New Year is on the verge of becoming Maine’s second-biggest lobster shipping week of the year, behind Christmas week, according to industry officials.

Lobsterman Gerry Cushman of Port Clyde said the year-round demand from China has helped drive prices up, and he is using the extra money to build a new boat.

But so far, Cushman said, the surge has not driven large numbers of Maine fishermen to go out in the middle of winter, a punishingly cold and wet time of year in the Atlantic when lobsters head out into deeper, more dangerous waters.

Maine’s small number of winter lobstermen, Cushman said, consists of “stragglers who are stupid like me, or who have kids.”