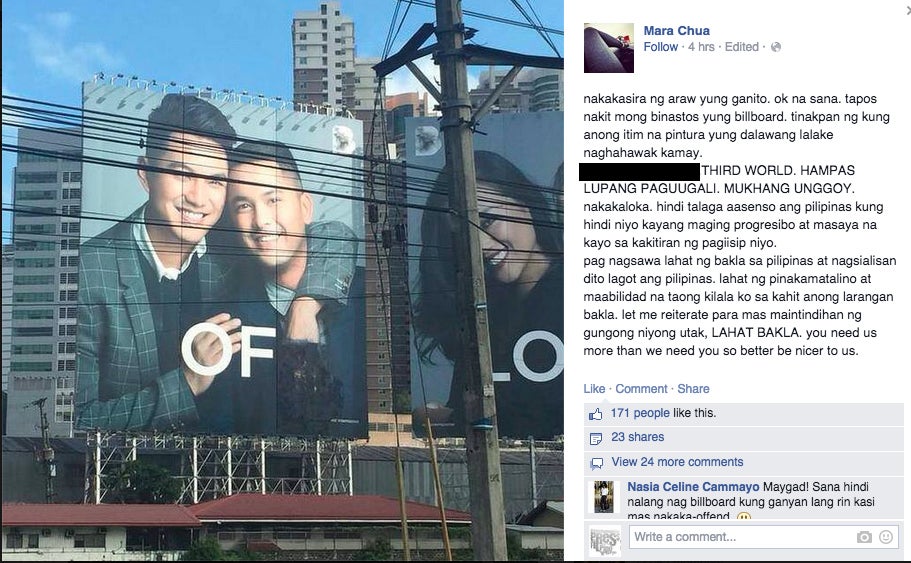 MANILA, Philippines—No one defaced the advertisement supporting “all kinds of love,” an executive of Bench said.

In an official statement of the clothing company obtained by Stylebible.PH, Jojo Liamzon, advertising and promotions manager of Suyen Corp., clarified that the version of the ad which featured couple Vince Uy and Niño Gaddi with their obscured hands was the one approved by the Ad Standards Council.

“When billboard images for Bench’s ‘Love All Kinds of Love’ campaign were submitted to the governing body, the company received concern over the photo of Vince Uy with his arm around partner Niño Gaddi, hands clasped in a show of affection. Prior, the governing body had rejected photos of the couple looking lovingly at one another, citing ‘traditional Filipino family values’ as a reason. The approved version with hands obscured is the billboard that Bench had printed and that now stands on Edsa,” Liamzon said.

He said that Bench pushed with the release of the “defaced” ad as they believe that the values of inclusion and acceptance being promoted by the company are still intact.

“Despite its deviation from the original idea, Bench decided to move forward with the billboard showing obscured hands because the company believes that its message was still intact: That of well-represented diversity, and the message that same-sex relationships are just as substantial and valid as heterosexual romantic love and familial love,” he added.

“We still stand by a message of unity, not division. And while the message has been compromised to an extent, the most important thing is that at least, for the duration that the billboards are up, the voices, lives, and loves of the LGBT community are unavoidable and undeniable on an avenue Filipinos from all walks of life cross every day,” Liamzon emphasized.

The obscured ad sparked outrage from netizens and started a viral “paint their hands back” campaign. AJH