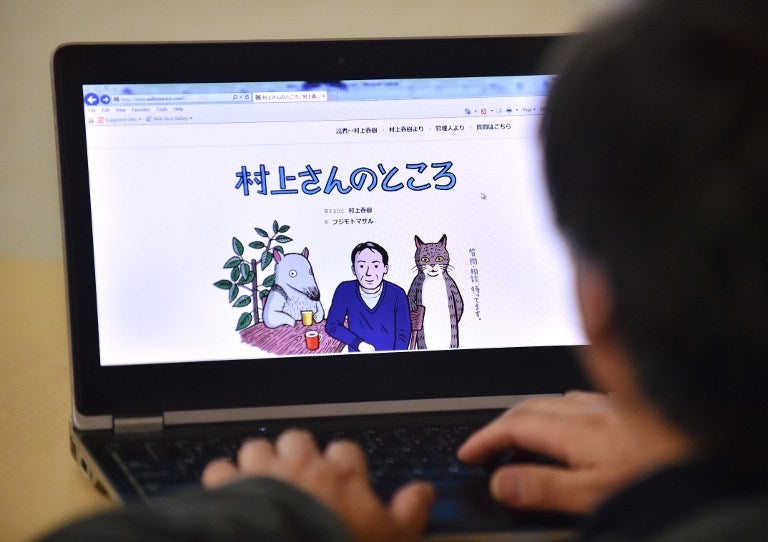 TOKYO, Japan—Japanese novelist Haruki Murakami is offering tips on love and lust, counselling sex with a fish and advising one fan who wants to date a younger woman to read Sun Tzu’s “The Art of War.”

The writer, known for his sometimes surreal literary diversions, has been taking queries from readers on a specially established website, offering advice on subjects ranging from the racy to the frankly odd.

In one recent post on “Murakami-san no tokoro” (“Mr. Murakami’s place”) the author of “Norwegian Wood” told a 22-year-old woman who claimed never to have fallen in love that the feeling is akin to “a cat slipping into a whirling washing machine.”

“This is something you would never see unless you’ve actually done it,” Murakami writes. “If you feel you wouldn’t want to, or it would be a hassle, then please do not go near a washing machine.”

To a 53-year-old man who wants to know the secret to seducing a woman 20 years his junior, Murakami recommends Sun Tzu’s ancient tract on military tactics, “The Art of War.”

“Above all, you need to gather information. You need to create the chance to speak with her and find out how she would react to your advances.”

After one candid query from a married man who complains that his wife refuses to perform certain acts in the bedroom, Murakami suggests he suck it up and find alternatives.

“People … like her will not change easily,” he writes. “You may have to give up. Or you could keep a big koi carp (a type of fish) and train it … Of course I am joking.”

The 66-year-old—frequently mentioned as a possible Nobel Literature laureate—has garnered a large and fairly obsessive fan base around the world, who devour his works in dozens of languages.

The novels, which include “A Wild Sheep Chase” and “Kafka on the Shore,” deal with the isolation and disenfranchisement of people who live on the margins of society.

His infrequent public appearances have added to the mystique of a man so wary of his own fame that he reportedly spends much of his life living in anonymity in the United States.

Despite this, fans appear to feel a genuine connection and many correspondents have opened themselves up.

One 38-year-old married woman told of her torment over her unrequited love for a colleague.

“This feeling will never come to anything real, nor should it,” she writes. “But it is killing me. He has been transferred now and I cannot see him anymore.”

Murakami’s response is that she should have acted on her feelings.

“Before he moved, maybe you should have slept with him at least once … of course without your husband or children knowing.”

But, he adds: “I am just talking to myself. This is not advice. I cannot be responsible for any consequences.”

Want to discuss cats or novels? Haruki Murakami will answer