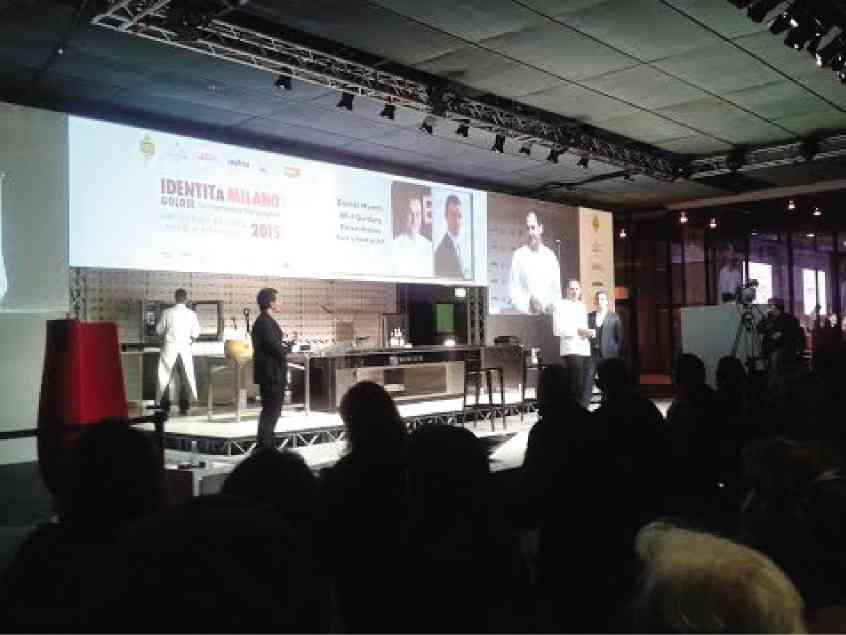 Identità Golose in Italy gathered big-named chefs on one stage

From Feb. 8-10, Milan became the ultimate hotspot as chefs and food aficionados gathered to attend the annual international chef congress tagged as the Identità Golose. Held at MiCo Milano Congressi hall, the anticipated event was reminiscent of the recent Madrid Fusion. It was of a smaller scale but equally grand, prestigious and star-studded nonetheless.

The room was filled with beautifully designed stalls from some of the world’s most trusted and loved food brands. There’s Bragard, regarded for high-quality chef uniforms and aprons; Menu 24A for beautiful tableware from Bergamo; and Valpadana, which had a huge log of provolone cheese hanging like a boxing punch bag at its stand.

Cookbooks, tablecloths, kitchen knives, and the latest cookware were also on hand and ready to be tried and tested.

There were pistachio nuts, extra-virgin olive oil, chocolates, and pastas of different shapes and sizes were available for tasting. And the guests gladly obliged as long queues crowded the busy stalls in between conference breaks.

The days were lined with talks from some of the most respected names in the restaurant industry—from Italy’s Enrico Crippa and Davide Oldani to French chef Alain Ducasse, Brett

Graham of The Ledbury in London, and Vladimir Mukhin of Russian White Rabbit Restaurant who said that, though he’s comfortable with English, he decided to speak in Russian and have a translator, since his mother tongue can best express his passion.

Each chef demonstrated how to execute their signature dishes, like Carlo Cracco who poached prawns and shaved pistachio nuts after and Mukhin who prepared a dish composed of persimmon, goat cheese, fenugreek and bastorma, the Russian brasaola.

Master chef judge Joe Bastianich was in attendance to sign his book, while Massimo Bottura, chef and owner of the world’s third best restaurant Osteria Francescana according to the elusive San Pellegrino list, had the whole room packed to the seams. For his talk, he opted not to promote his restaurant or the tasting menu he launched weeks ago.

“There are better things to talk about,” he said, pointing out the role chefs need to play; that they can be the missing link between the rich and the poor and it’s their responsibility to convey a message of goodwill to the young generation.

Daniel Humm of New York’s Eleven Madison Park (No. 4 in World’s 50 Best Restaurants) brought his co-owner and best friend Will Guidara to Italy and to the Identita Golose stage to explain how their collaboration as chef and general manager works, and that great service can only be achieved by providing support for each other.

“It’s nice to know that there’s someone in the floor who works just as hard as the kitchen to make the people happy,” said Humm.

James Beard Award-winning chef Sean Brock of Husk Restaurant in Charleston, South Carolina, dissected people’s general impression and limited idea of Southern food and told them what that particular cuisine is really about. He mentioned that Southern America has many micro cuisines and that agriculture and geography influence this. He also brought up the theory that if you poison the soil, the produce may grow faster but then you have to eat more of it because there’s no nutrition.

Jason Atherton, who runs a string of successful restaurants in London and all over Asia, including Esquina in Singapore and Ham & Sherry in Hong Kong, talked about taking a risk and pivotal career move at age 38. He left Gordon Ramsay’s Maze Restaurant and didn’t know what to do next. His wife told him not to live his life with regret; and so, together they jumped the gun and invested their savings in opening a restaurant. It either worked or they’d go bankrupt. The food joint is called Pollen Street Social and it earned a Michelin star in just six months. That was the start of what is now a Jason Atherton international empire.

Identità Golose proved to be a hub of knowledge as there was much to learn from the celebrated chefs, not just their cooking techniques and tricks, but also, and more importantly, how they run their businesses and remain to be at the top of their game to this day.

Special thanks to Alex Lichaytoo of Bacchus and Lavazza.