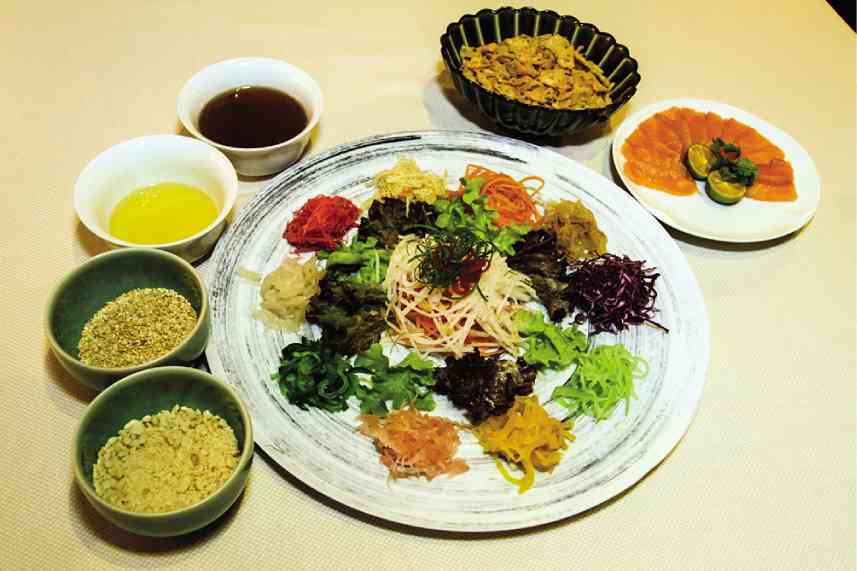 Both menus are available at dinner (6 to 11 p.m.) for a minimum of four persons.

Asked what sets Crystal Dragon apart from other Chinese restaurants in Manila, Choi said that it aims “to give Filipinos and foreign guests high-end Cantonese dishes” known for their taste, quality ingredients and presentation.

Both menus start with Choi’s version of the Prosperity Salmon Fish Yu Sang, and are capped off by either Wild Rice with Barbecue Pork Meat Wrapped in Lotus Leaf or Stir-fried Egg Noodles with Seafood, Mushrooms and Shredded Cabbage.

Because of his background (he had worked for a good number of years in several five-star hotels in Kuala Lumpur), Choi included Prosperity Salmon Fish Yu Sang, a Chinese-style salad teeming with prosperity symbolism.

The dish is popular among Chinese in Malaysia and Singapore, but is now also being served in a number of leading restaurants in China and other Asian countries during the Chinese New Year.

Before they share the salad, which consists of various shredded vegetables, salmon bits, crunchy crackers and plum-based dressing, diners are asked to toss the salad together with their chopsticks for good luck.

“A growing number of Chinese from the mainland spend their holidays in Malaysia,” said Choi. “After several years of seeing the tradition in Malaysia, people in China have started to adopt it.”

Symbols of good luck are also highlighted in a number of main dishes like Slow-cooked Supreme Treasure in Bean Parcel with Abalone Sauce.

Stuffed with oysters and sea moss, the pouches resemble a moneybag. Wishes of prosperity don’t end there because eating sea moss during the New Year is considered by many Chinese as good luck.

When he first arrived in Manila nine months ago as part of the City of Dreams startup team, Choi lost no time observing and doing informal research.

He went and ate in various restaurants in the Philippines, and one of the things he noticed was Filipinos’ love of cheese.

“So I thought of creating a three-in-one dessert that features such ingredients as Emmental cheese, shredded coconut and sweet potato,” Choi said.

“If you don’t like the cheese and coconut, you can still opt for the tikoy,” he said.

Since Filipinos and Chinese share a love of pork, Choi also came up with his version of the Suckling Pig (not part of the restaurant’s special Chinese New Year’s menus), one of Crystal Dragon’s signature dishes. But you have to order the dish in advance.

Some diners mistake Choi’s attempts to spice up traditional Cantonese dishes as fusion. He would rather describe his picture-perfect and tasty creations as modern.

Upgrading classic dishes is never easy. Choi has to give each dish a new twist without venturing far from tradition to avoid disappointing less adventurous diners.

“Maintaining the right balance is important,” he said. “That’s why we continuously study and experiment. Since we want to maintain authentic flavor, we can only tweak a dish here and there, but we can’t overdo it.”

And since Crystal Dragon’s Chinese New Year’s festivities end Feb. 28, both menus are available for a limited time only.