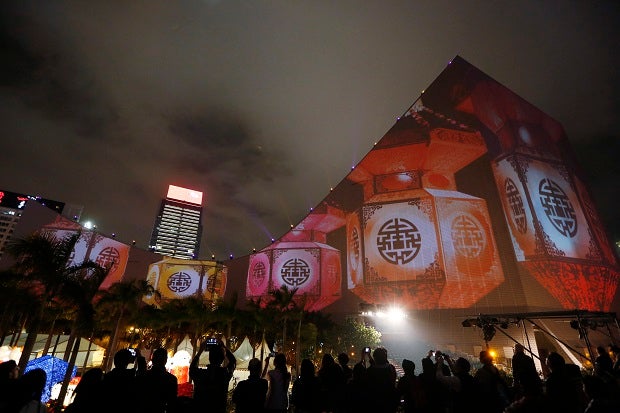 Images of Chinese lanterns are projected on the building of Hong Kong Cultural Centre in Hong Kong Saturday, Feb. 14, 2015. Chinese will celebrate the Lunar New Year on Feb. 19 this year which marks the Year of Sheep on the Chinese zodiac. (AP Photo/Kin Cheung)

Year of the Sheep won’t be baaa-d, fortune tellers say

But fortune tellers in the southern Chinese city are heralding a more docile Year of the Sheep — though volatility is still in the air, with warnings of more woes for the global property markets, and an “explosion of bacteria” leading to new and resurgent diseases.

The lunar calendar is based on the cycles of the moon, and through Chinese folklore ascribes 12 animals — one for each year in the rotating cycle.

The sheep, in the eighth position, is “comparatively tame, meaning that if there is any challenge everyone can come together to solve it”, Hong Kong based feng shui expert Cheng Chi-tai told AFP.

“But because of the animal’s character, it is not strong enough to suppress the instability from last year,” Cheng said, adding that there is no difference between the sheep and the goat in the Chinese translation.

Chinese fortune-telling, including feng shui, is based on ancient philosophy and the belief that events are dictated by balancing the five elements that make up the universe: metal, wood, water, fire and earth.

Feng shui — literally meaning “wind-water” — is influential in many parts of Asia, where people adjust their lives, homes and offices based on its rules to maximise their luck and wealth.

“This year will definitely be calmer in terms of disasters or accidents,” feng shui expert Thierry Chow told AFP. The 27-year-old is a second generation master who studied the practice under her father, renowned expert Chow Hon-ming.

“The reason last year was so explosive was because the fire element was quite dominant,” Chow said.

In its annual tongue-in-cheek “feng shui index” CLSA, one of Asia’s leading brokerages, predicted there would be a slight improvement in the economy due to the sheep’s docile nature.

“Prayers and invocations to wealth, engagements and transactions, openings and agreements are smiled upon by the gentle sheep,” it said.

But Chow also warned the the animal was strongly connected to the earth element, which can represent sickness, meaning that this year could see a resurgence of existing diseases and the genesis of new ones.

“Depending on what other elements are partnering with earth, it usually sparks an oubreak,” she said, adding that the combination of wood and earth elements were a particularly potent mix.

“There is going to be a big explosion of bacteria,” Chow added.

Property markets around the world could also see a tough year ahead with a possibility of a downturn, both Chow and Cheng predicted. The sector is represented by the earth element but the impact of the wood element may cause problems.

But there are also positive sides to the wood element, Chow said, suggesting it could also spark a renewed interest in Earth-friendly trends — such as a rise in people becoming vegetarian, or adopting a greater interest in farming and sustainability.

An individual’s fortune for the lunar year ahead is calculated by using the exact time and date of his birth and examining the relationship with each of the elements.

For example, Oscar-winning actress Jennifer Lawrence, who was born in the Year of the Horse, will continue to have a successful year with lots of work and opportunities, Chow said.

But the star, who hit the headlines last year after hackers posted nude pictures of her online, may continue to struggle in her personal life. Chow said: “If she’s in a relationship there will be lots of conflicts and it will be very unstable.”

Alibaba’s Jack Ma, one of Asia’s richest men, will not be greatly affected by regulatory troubles despite authorities recently accusing his company of allowing “illegal” actions on its multi-billion-dollar online shopping platform.

“He’s not going to have a rocky year, it will be quite stable overall,” Chow said, adding that his wealth will go up in 2015 due to his birth sign. “He will be travelling, be occupied and busy in a positive way.”