‘Our hands will never be erased’ | Inquirer Lifestyle ❮ ❯ 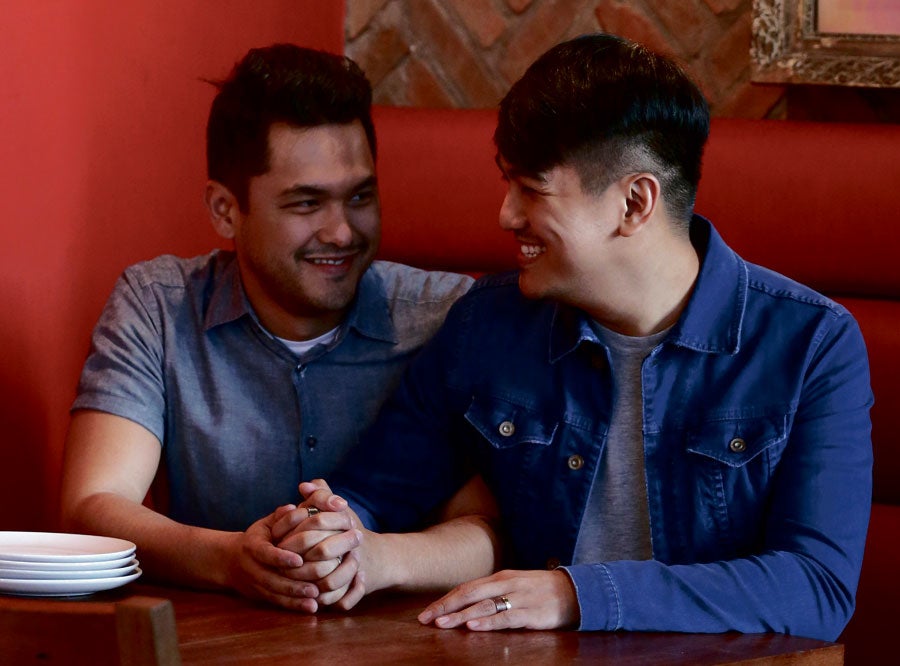 ‘Our hands will never be erased’

They met in a club in Malate while they were out with friends.

By the end of the night, they were  no longer strangers. Vince said, “We always joke to our friends na ang theme song namin ‘We Found Love in a Hopeless Place.’”

Their love was “very high school,” Niño said.“We would talk on the phone for three hours.”

Talking is a big part of Vince and Niño’s relationship. “We share many things… That’s one of the things I really love about him, that he’s able to talk to me. We’re open and honest enough to talk about things that couples normally don’t,” said Vince.

And they fell in love.

A little over a month after they first met, while in Hong Kong’s Victoria Peak, they officially became a couple.

That was in 2010, five years before their controversial Bench billboard.

It was Raymond Ang, editor of Bench’s Benchmark magazine, who first asked Vince and Niño to be part of the brand’s Love All Kinds of Love campaign in December last year. “At first, I was joking, ‘Niloloko niyo ba ako?’” Vince recounted. “We were saying, ‘Why us?’”

Vince added, “We were so flattered, actually.”

The couple did not hesitate; the brand had already included them in the #100HappyGays pride special in 2014. They thought it would be another good opportunity to represent the LGBT community.

“They could have chosen someone more popular than us. They chose us merely because we have a very pure sense … and a very confident sense of who we are and our role in the community,” said Vince.

When they said yes to being part of the campaign, they didn’t know there was going to be a billboard. They found out about it only in January, at the shoot with photographer BJ Pascual.

Vince said, “Being part of the campaign is enough. Both of us are used to working behind the scenes, and to be fronting something is something we’re not used to. But more than being pressured, we’re just happy to be able to represent.”

They enjoyed the shoot, which they described as “quick and very light,” saying that BJ, Raymond, and Paolo Lorenzana, editor of the Bench blog, made them feel comfortable.

But the next day, on his way to work, he spotted it, beside the other Bench billboards on Edsa: a gigantic photo of his face and Vince smiling at him. He quickly sent an iMessage to Vince who was still sleeping. “Good morning!” he typed cheerfully.

In his excitement, he didn’t notice that their hands on the billboard had been painted over.

But other people did.

Vince said, “May nag-text lang na ‘Why are your hands covered?’ We didn’t know. We assumed there were rules that needed to be followed.”

Asked if they questioned Bench about it, Vince said, “We didn’t feel we were in the position to ask.”

Instead, he added, they chose to focus on the positive. “For me, to have us still there is a strong-enough message as it is.”

They checked the hashtag #LoveAllKindsofLove and were thrilled to see stories of affection from different people.

“Ang daming LGBT couples na nag-come out using that hashtag, posting their couple photos, sharing their love stories. That’s so heartwarming. When you click on the hashtag, it feels like a compilation of love stories. Isn’t that beautiful? It’s a mix of lola-apo, lolo-apo, gay lovers na five years na, lesbian lovers na 19 years… Ang ganda… I feel that’s really the essence of the campaign, the message of having people share their love stories without fear,” Vince said.

It was Valentine’s weekend, and the two went on with their plans to hang out with other couple friends, driving to Baguio early on Friday and taking a nap when they got there.

They had no idea, until they woke up hours later, that another hashtag had emerged and gone viral: #PaintTheirHandsBack, started by Rob Cham and Thysz Estrada.

“It was overwhelming,” Niño said.

“Pag-gising namin, naloka na lang kami, meron na palang ganun na nangyari,” Vince said. “Sobrang touching. I really want to thank everyone. And it’s not just within the LGBT community. A lot of heterosexual people joined in. There is a concern behind it. Kung hindi niyo lalagay hands nila, kami gagawa. Which is something reflective of how people perceive the LGBT [community] now, that they’re willing to fight not just for their brothers and sisters, their friends, everyone they work with, every gay and lesbian person they’ve hung out with in a club, did karaoke moves with, joked around with. It only goes to show how, at least in some way, we are progressive. We are the new Filipinos.”

Over Valentine’s weekend, people continued to flood social media with messages of support, editing the image in an effort to restore Vince’s and Niño’s hands in creative ways.

What was even more touching to them was that they didn’t know Thysz and Rob.

“I tweeted Rob to thank him because I don’t know him, I don’t even know if he’s straight, if he’s gay or whatever, for him to take his time out of his busy day to do that… Ang ganda nung caricature niya, even down to our rings, nandun,” Vince said.

The rings, which were obscured in the billboard, are Vince and Niño’s commitment rings, a gift from Niño on their  first anniversary. “Sabi nga kasi ni Beyonce, ‘Put a ring on it,’” he quipped, smiling.

The rings are inscribed with their names—“Niño & Vince” on Niño’s, “Vince & Niño” on Vince’s.

The censorship was ironic, too, because hand-holding is important to Vince and Niño.

Asked how their friends and family members felt about the billboard, Vince said: “Everyone is proud. Our families are very proud. Most of the [messages from the] people are congratulatory. For the ones who ask, they’re more nanghihinayang. ‘Sana hindi na lang tinakpan, OK lang naman.’ That’s really what we felt. Nanghihinayang. It would have been nicer if our hands were shown. But I would assume that there are rules that need to be followed. But it’s about time those rules are changed.”

Bench and the Ad Standards Council have released contradictory statements about the billboard, fanning the flames of controversy.

Vince said, “Ako, personally, I really don’t believe that Bench had anything to do with manipulating people or whatever, kasi the message in itself is very pure.”

Amid the furor, Vince and Niño have remained steadfast in their desire to spread a message of love. “We feel that it’s really the message, more than anything, it’s to love all kinds of love. I believe that love is really stronger than any other thing. Love is stronger than hate. I feel that love is a good agenda to promote. That’s why kami, holding hands or not, we are still thankful to be part of the campaign of love.”

Niño said, “It’s all about love. Hindi about us talaga ’yung campaign, it’s for the LGBT talaga.”

Vince said, “I’m hoping this can be an eye-opener. I’m not expecting a quick change or an overnight change. But I really commend those people who are fighting for it, who are very vocal about it.”

Long after the controversy dies down, long after the campaign runs its course and the billboards are taken down, Vince and Niño will still be themselves, the loving partners who enjoy watching their favorite TV shows together, who love cooking for each other, who enjoy laughing together, who travel to the world’s highest peaks to celebrate their love, who are looking forward to making their dreams come true.

“Honestly, we’re just still us. Nothing has changed. If there’s one thing that’s changed, it’s made us appreciate our relationship more pa,” Vince said. “Happy talaga kami. At the end of the day, we don’t sleep with a heavy heart. Our hands will never be erased.”