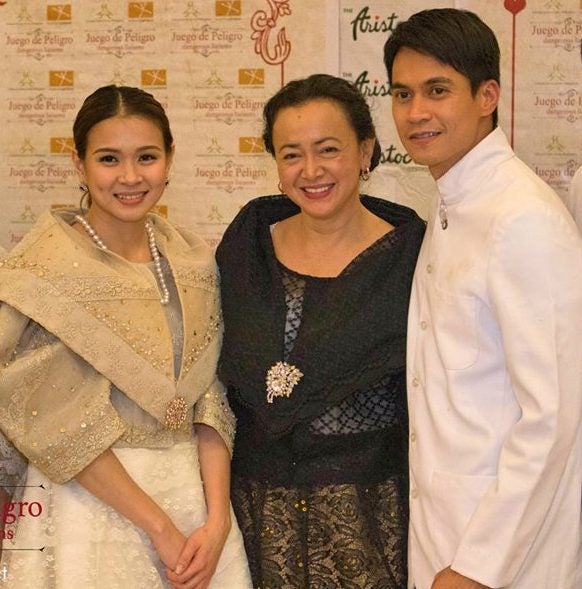 Shamaine Centenera-Buencamino had attempted three times—up until the last minute—to back out of her latest stage incarnation as a scheming, conceited, aristocratic cougar. But not because she has issues with a character who happens to be, as she puts it, “a selfish bitch.”

The role of Señora Margarita—originally a 28-year-old widow and peninsulares, or a Spaniard born in Spain but raised in the Philippines—would be the late-19th-century local counterpart of the Marquise de Merteuil (convincingly played by Glenn Close in a 1988 film version) in Elmer Gatchalian’s adaptation of the French novel “Dangerous Liaisons.” The play, which runs until March 8 at the CCP Little Theater, is directed by Tuxqs Rutaquio for Tanghalang Pilipino (TP).

“I told Tuxqs that, even if I had [cosmetic] surgery, I still wouldn’t look 28,” the stage, film and TV actress said when Inquirer visited the cast’s second day of rehearsals. “Sabi ko nga, [the role came] kung kailan ako tumanda.”

“On the other hand, as they say, ‘Bago pa tuluyang kumulubot,’” she quipped, laughing.

Though she soon turns 50, Buencamino doesn’t seem to rest on her laurels, giving performances of a quality that makes her theater royalty, as in her portrayal of Donya Olivia Nepomuceno in 2013’s “D’Wonder Twins of Boac” and the dynamic bodabil performer Ester in the 2012 musical “Stageshow.”

Rutaquio naturally refused to let her go. “It’s hard to find an artist who has that complexity, who can embody such a complex character,” he said.

The director had already worked with Buencamino in four plays before “Juego.” He said he “knows her work ethic, discipline, passion for the roles [she takes on].”

Instead of the 25-to-30-yearold ideal casting age, rewriting the señora as a demure but older sexual predator becomes the necessary foil for the young, hot Vicente played by Arnold Reyes (Vicomte de Valmont in the novel).

The lavish period setting as well as the underlying plot and power struggles, especially the tug-of-war between the sexes, are retained, even if the story has been localized, said the actors.

How then does the reluctant cougar intend to approach all her dalliances with the “Juego de Peligro” boy toy?

“My preparation so far has been to try to get slimmer; I’m really big already … and because we need to have stamina for this kind of [work],” Buencamino said.

In “Stageshow,” for example, the actress and her costar, real-life husband Nonie, were onstage most of the time. “Nonie and I were both in a TV soap [at the time], so our schedules were so horrible,” said the wife and mom of four.

The on- and off-stage couple had to focus on being ready and healthy for the play. “Sometimes we would tape [for TV] in the morning and come for the [theater] shows, then go back to taping that same night and finish early the following morning,”she recalled.

Sexing up for the role of Margarita, she said, wasn’t a conscious effort to act or look a certain way. “It’s really more of how you interact with the co-actor. I won’t be doing it alone. With Arnold, he’s sexy enough as a person to be able to bring that out in his character.”

The actress sees her character not as a typical antagonist but one who actually hides behind many layers. “She would be the life of the party … very cariñosa, always eager to listen and makes you feel relaxed, because that’s how women [of that era] who are supposed to be powerful do it, instead of projecting ‘I’m strong,’” explained Buencamino.

“They make it seem as if everything is about you, not about them—that’s how they spin their web around people,” she added.

She believes the original material presents a beautiful story and an interesting perspective on the struggle for power, which remain relevant even if the novel was written ages ago. Similar situations today make people lose track of the essence of life.

“This play tells us what’s important is love, sincerity, sacrificing yourself—real sacrifice—for other people. Trying to find happiness by ‘winning’ over another person will always make both players lose.

“It strengthens the Catholic or Christian belief that to find real happiness is to sacrifice your wants, your needs, for another person. When you work only on getting what you want, that’s when you fail to be happy. That’s what dooms Margarita… She thinks she’s the champion of women who are being oppressed but, in the game [she plays with] the opposite sex, she has turned back on her own gender.”