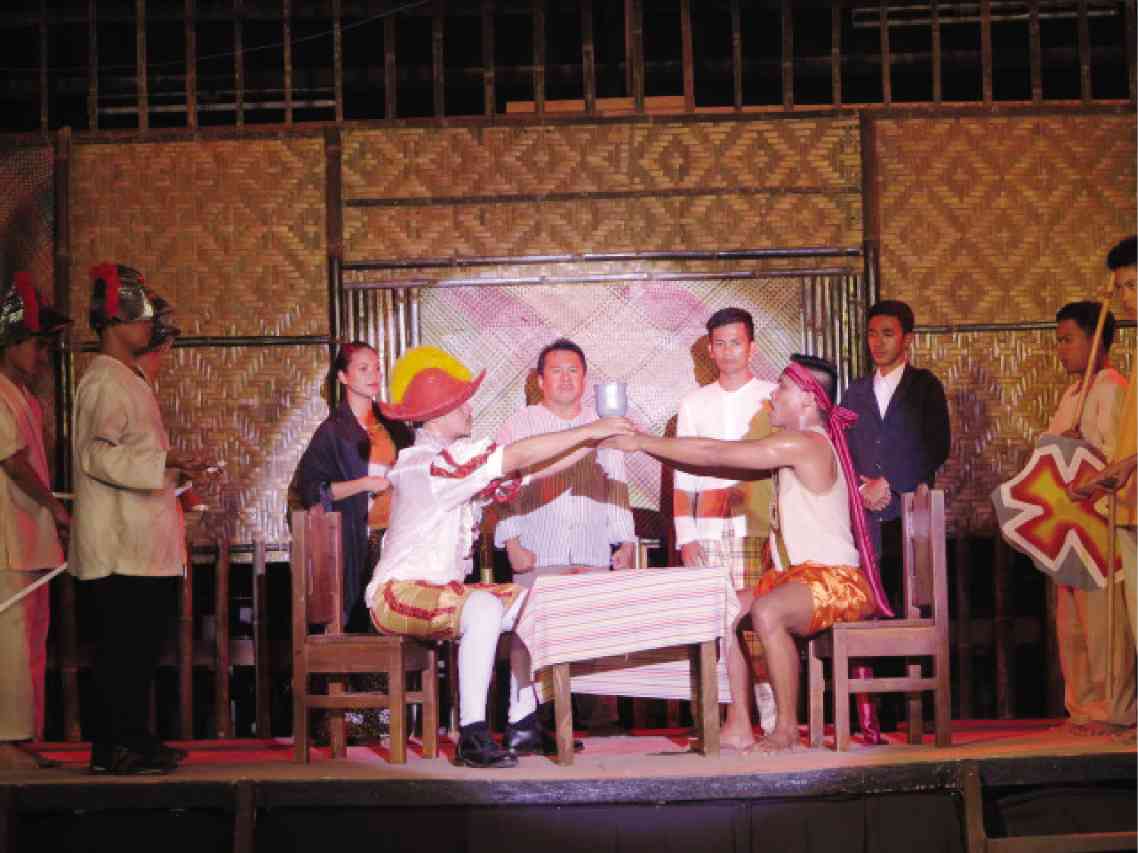 An innovative way of applying adaptive reuse to an old structure.

The now seldom-used buwangan or cockpit arena in Baclayon town, Bohol, has been transformed into a theater, hosting last Jan. 31 the first of many stagings of the play “Teatro Porvenir,” by the newly formed local artist group Dulaang Kasing Sining.

Written by Palanca awardees Edward Perez and Tim Dacanay, the cockpit play is the brainchild of artistic and musical director Lutgardo Labad.

It got assistance from the National Commission for Culture and the Arts (NCCA), the Bohol provincial government, and the local governments of Tagbilaran City and Baclayon.

Also supporting this undertaking was the Yu family, owner of the venue, originally built after World War II.

The event was a dream come true for Labad, who said he had always dreamed of staging a play inside a cockpit arena. “Teatro Porvenir” is the first Tagalog play Labad did for Bohol.

In the last three years, said Labad, the cockpits in Bohol had fallen into disuse due to a national law prohibiting cockfights except

He said this forced many to participate in the bigger Tagbilaran cockpit for their weekend game. Since then, the Baclayon cockpit and municipal cockpit have been used only during town fiestas.

“Our dream is to temporarily transform the idle structure into a performing-arts venue with the approval of the present owners,” said Labad, suggesting the renaming of the cockpit arena to Teatro Buwangan de Baclayon.

Aside from theatrical plays, the buwangan can also host concerts, exhibits, lectures, workshops.

“As a mode of creative adaptive reuse, this evolution can make the cockpit a new cultural-tourism destination, providing visitors and tourists to Bohol an alternative cultural-tourism product, especially in the evenings,” said Labad.

He added that the move would not only promote local talents but also allow “community-based alternative culture-based creative industries to flourish.”

Labad said he was influenced by the Ilonggo musical couple Gilopez Kabayao and his wife, who used to perform musical concerts all over the country inside cockpit arenas. He added he was also inspired by the Wilfrido Ma. Guerrero Theater of the University of the Philippines, which also staged plays in cockpits. These performances were done from the 1950s to the early 1970s.

A grant from NCCA during the 150th birth anniversary of Andres Bonifacio in 2013 to mount plays about the revolutionary hero was the reason “Teatro Porvenir” was staged, said Labad, adding that he would really like to showcase the other side of Bonifacio as a theater actor and director.

He then merged the winning pieces of Perez and Dacanay into a two-hour spectacle.

“Bonifacio’s story is not widely known in Bohol. More so, as a theater artist,” said Labad.

“I wanted to use it really as a historical education process, that is why I invited students for them to understand Bonifacio and Rizal, their relationship with each other,” he added.

Labad explained that through “Teatro Porvenir,” he would like to tap many artistic resources in the province, to show the good production in Filipino, and also to get a chance to educate and to highlight Boholano talents, because of its content, origin, history.

“Teatro Porvenir” was the name of the theater group established by Bonifacio in 1886. The company lasted until 1902.

Lighting director Tony Esteban said the play was something new.

These might just be the same venues used by Bonifacio before, he explained, but the important message must be: “We’re reclaiming that we are Filipino.”

At the opening program of the National Arts Month recently at Bohol Cultural Center, Bohol Gov. Edgar M. Chatto expressed his support for Labad and his group.

“If the people are in the sabungan (cockpits), we bring the theater to the sabungan,” he said.