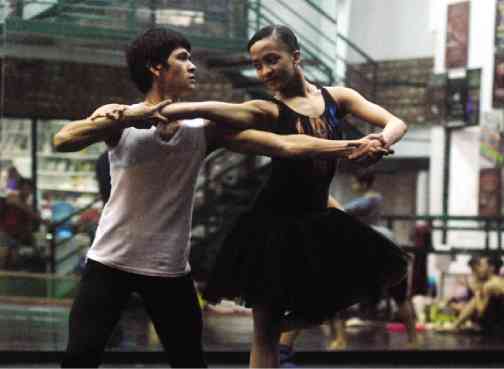 Ballet Manila (BM) appears to have scored a coup by tapping one of the most in-demand choreographers in the world today for its 20th anniversary gala.

Working nearly 40 companies in Europe and America, Belgian-Colombian Annabelle Lopez Ochoa will be choreographing for the first time in Asia.

“Bloom,” a ritualistic piece set to Philip Glass’ Violin Concerto, will be premiered in “BM 2.0” on Feb. 27 at Aliw Theater.

“I wanted to make a theme about Asia,” said Lopez Ochoa. “The only country I knew was Bali. I know the ritual puja is to chase away bad spirits and to thank the gods for this day. As a tourist, you think it’s cute. Coming home, you realize how humble and wonderful it is to have this ritual every day, and to take the time to have this little flower offering even for tourists who don’t even care. I wanted to make a piece about that Hindu ritual.”

When she first worked with BM, she was surprised that everybody had Spanish name and the dancers shared the same Catholic rituals that she had grown up with.

Asked about her initial impression of BM dancers, she replied candidly: “They are much shorter than what I’m used to. They are as short as me.

(She is nearly 5’3”.) I dance energetically and am precise. I have to accept that a taller dancer cannot dance like me. Here they can. I was pleased. I can see the way my movements are intended.”

Since shorter dancers are quicker than their Western counterparts, Lopez Ochoa uses their height to their advantage.

“They’re compact, especially the men. In Asia, there’s the martial-arts influence. The sharpness allows me to be more precise while, in European companies, the dancers are more fluid. For me, the men represent the gratitude while the women are the flowers. There is respect for the women.”

Introspective with her craft, Lopez Ochoa pointed out that choreography’s beauty lies in the dynamics and power of the dancers. “When a group of people has one good thing, it generates energy either in the good or bad sense. In a good sense, you can push mountains.”

In keeping with BM’s classic tradition, the females will be in pointe shoes and tutus, a first for a contemporary choreographer like Lopez Ochoa.

She is modest about being called the “It Girl” in today’s dance world. With her prodigious body of work, Lopez Ochoa has succeeded in a male-dominated choreographic world.

Movement flows naturally to her like water. With her expressive eyes and sinuous arms, Lopez Ochoa, who looked like Jennifer Love Hewitt, talked animatedly about dance.

She recalled starting ballet class at 8 years old to straighten out her tomboyish ways. The child saw how it improved her posture, and discovered her flexibility, musicality and passion for perfection.

“When I like something, I go for it. I wanted to be the best,” she said.

Although classically trained at the Royal Ballet School of Antwerp in Flanders, Lopez Ochoa enjoyed performing jazz with Djazzex in Holland and became a soloist at Scapino Ballet in Rotterdam. Deep inside her, she preferred to choreograph than to be in front of the spotlight. Thus, at 28 years old, Lopez Ochoa ventured as a freelancer.

She cited “Before After,” a duet for the Dutch National Ballet, as a major turning point and her signature as it opened doors for her around the world.

“A colleague said there were not many female choreographers,” she said. “One is that women can’t show partnering. Unless you can do a nice duet, you will never be choreographers. I learned partnering and created my own language. ‘Before After’ is about a relationship, and what happens before and after that. When people see it, they are surprised to learn that a female made it.”

She attributed her success to her individualism. “It’s about having your voice—the closest that you can say about who you are. You shouldn’t be copying male choreographers because they are there for who they are. In the dance world, there is a space for female choreographers. The work will look different. There is subtlety. The dynamics between men and women will be different then if done by a man. That can be interesting for an audience.”

Her second turning point, “A Streetcar Named Desire,” received the Best Classical Choreography award from the Critics’ Circle National Dance Awards in the United Kingdom. Created for the Scottish Ballet, it was nominated as best new dance production by the Olivier Award.

“It’s difficult and dramatic,” said Lopez Ochoa. “We didn’t think people would like it because there are no tutus; no happy ending, and nobody gets married in the end.”

She was attracted to the psychological complexity of Tennessee Williams’ characters. “Although art is about escape—like forgetting our sorrows, it is about telling who we are as human beings and how society is. When I read the story with the disturbing ending, [I thought] this could happen to us. A woman tries to survive; makes mistakes, weaves lies, and they worsen. I wanted to say that not everything has happy endings in life.”

Her narrative also indicates a significant trend in the dance world.

“People want story ballets. Choreographers are using their craftsmanship either to tell new stories or to rehash existing stories in a contemporary way.”

The choreographer adds that most companies are challenged by audience building. The technology-driven world may have enabled the people to watch dance in the comforts of their home at the expense of half-filled theaters. Lopez Ochoa hopes that social media could drive the public to buy tickets to the theater.

“It’s hard to get people out of the house. Everything comes to your place. Social media may have worked against us, but it can also remind people that there is some beauty out there that’s ready to be shared.”