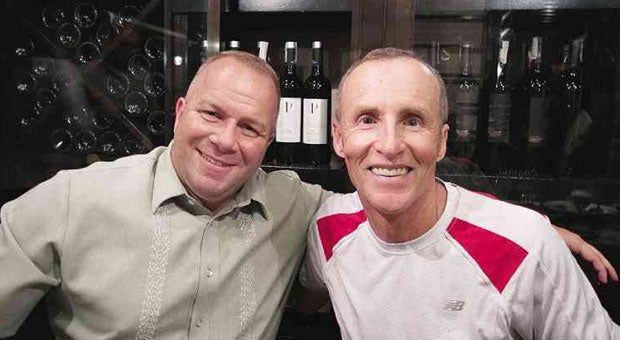 It was the race that changed the sport of marathon all over the world.

During the 1982 Boston Marathon, an unassuming farm boy from Minnesota took on the world’s no. 1 in a race now known in running history as the “Duel in the Sun.” Dick Beardsley—who prior to the competition had a quiet, unheralded running career—was neck-and-neck against heavy favorite Alberto Salazar.

Both broke the American and Boston Marathon records that day, with Beardsley clocking in his personal record of 2:08:53, just two seconds behind Salazar. The world watched with excitement—the race was broadcast live on satellite television—and soon the running bug caught on.

That was also the thing that turned Manila into the marathon capital of the world, a title conferred upon it when the city hosted more marathons (nine) than any other city in the world in a single year.

“Filipinos have the perfect body to run marathons. They’re petite and not big-boned,” said the 59-year-old American running legend Beardsley, who was in the country last week to give a series of motivational talks to national athletes, running enthusiasts, businessmen and government leaders upon the invitation of British American Tobacco (Phils.) Ltd. general manager James Michael Lafferty.

Lafferty is also a marathon runner and coach, and is an honorary coach and consultant at the Philippine Amateur Track and Field Association.

Beardsley is the world’s fifth fastest US male marathoner, and holds the Guinness world record as the only man to run 13 consecutive personal bests in the marathon.

But life at the top was not without its many misadventures and setbacks. “It is a lot less difficult climbing the ladder than staying up there,” Beardsley said.

When he gained international attention for his Boston Marathon performance, he found himself running hard again for another “Full Mary” (full marathon, this time at Grandma’s Marathon in Duluth, Minnesota) just two months later.

Three days after that, in Anchorage, Alaska, he ran a 10k. Since people were not expecting him to jog, he ran hard again.

Two days later, in Fairbanks, he ran another 10k. Soon, his left Achilles tendon started getting tight, but he kept on going.

At some point he would hear it squeak each time he flexed his heel. It took him longer and longer to warm up, until one day he needed to have two major reconstructive surgeries.

The ultimate price he had to pay, however, was missing out on the 1984 Olympics due to injuries.

“That was my downfall. I was trying to please so many people that I didn’t listen to my body. I could have just declined and watched the race instead of joining them,” he recalled.

And that’s the problem with many local runners today, said Lafferty. They need to send money back home so they race every weekend: “It’s like studying for the finals every night. They are ripping their legs. They over-race because they need money, not because they don’t know any better.”

Lafferty said running is bad when it’s overdone, when people start wearing minimalist shoes, when they race too often, when they perform the wrong workouts, and when they fail to properly stretch and warm up.

“Some of our runners, their level of flexibility is abysmal! I’ve been to funerals where the bodies of people were more flexible,” Lafferty said.

For Beardsley, however, tragedy first struck when he figured in a farm accident in 1989. His leg got caught in the grain auger, with the machine almost tearing him apart. He was not expected to live, let alone walk or run again. But he survived.

In the next few years he was involved in a serious car accident. Then he got hit by a truck while running and, later on, found his vehicle rolling in a snowstorm. While hiking one day, he fell off a cliff when the ground gave out.

Since his glory days at the Boston Marathon, Beardsley has been hospitalized multiple times, and endured several surgeries. Thus began his descent into narcotic painkiller addiction.

For four years he was hooked on painkillers, gradually increasing the dose until he was chugging 80-90 pills a day. “The addiction to pain pills was the worse, because I knew what was happening but I couldn’t stop it. It was either I quit, or get caught, or take a bunch of pills and not wake up again,” he said.

He was forging prescriptions just to get his fix. The guy who had never been in trouble his entire life, who had never even stolen a piece of bubble gum from a candy store, was now committing a felony.

One day, he fell unconscious, and woke up lying in his own vomit. At that point, Beardsley said, he asked God for help. That night, he slept well for the first time in years. Withdrawal wasn’t easy, but like the athlete that he is, he was determined to kick the habit.

Running, he said, is generally cheap. All you need is a decent pair of running shoes. But always remember to invest in shoes, he said. They may look the same, but cheap shoes won’t perform anywhere close to the specialized brands.

Run in a way that is most natural for you, but avoid landing on your heels.

“Take off your shoes and start running. You’ll notice that you’ll not be landing on your heels. That would be disastrous. So practice that same form when you put on your shoes,” Lafferty said.

Lafferty is currently busy with his “Adopt an Olympian” project that aims to win for the country its first Olympic gold medal. The Philippines, he said, is the largest country in the world to not ever win a gold.

“I want to remove that label. We have world-class distance runners. Mary Joy Tabal can run with a canyon! Maybe we can fly runners to Boston, to train with Dick. I believe sports is a tool to build the country. We need to cut down the races they join, and win the bigger races,” Lafferty said.

Beardsley advises the three-mile rule. If, after running three miles, you still don’t feel good, switch to an easy run, otherwise you’ll be setting yourself up for injury. Do your hard run another day.