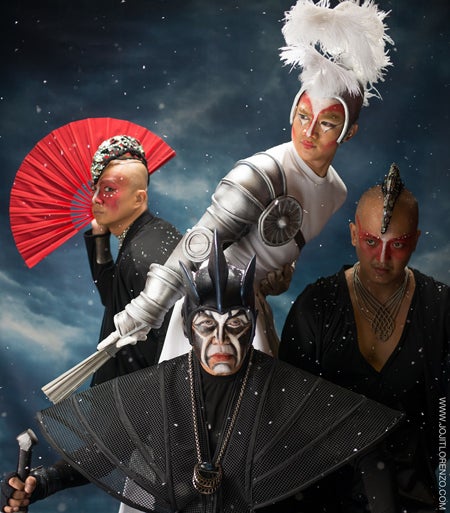 “Haring Lear,” directed by Nonon Padilla and presented by the new theater company Studio Connections International, runs from this weekend to March 8 at the De La Salle-College of St. Benilde’s School of Design and Arts.

After successful stints in Metro Manila and Taipei, the Philippine Educational Theater Association’s avant-garde “Haring Lear”—based on “King Lear,” arguably one of Shakespeare’s greatest plays, and directed by Nonon Padilla—is back upon the Manila stage with a flourish.

“Haring Lear,” with translation and adaptation by National Artist Bienvenido Lumbera, is being restaged at the De La Salle-College of St. Benilde’s School of Design and Arts this weekend and on March 6-8. It is a production of Studio Connections International (tel. 2183791), a new company dedicated to developing talent and producing plays and other cultural endeavors.

This was announced at a recent press conference at St. Benilde. The all-male cast is headlined by Bernardo Bernardo, who plays Lear; with Abner Delina Jr., Garry Lim and Buddy Caramat as Lear’s daughters Cordelia, Regan and Goneril, respectively.

The adaptation has a Japanese motif, with striking costumes and set designs. It is set in a postnuclear landscape. Bernardo gave the audience at the press launch a sample of how he would attack the role in a reading of the play with other members of the cast.

“The play has been cut to two hours and 15 minutes, and it will be different in Benilde, a different experience,” said Padilla. “It’s a bit tighter and more comprehensible even to the actors. Certain things were ruled out. Bien (Lumbera) translates the meaning of Shakespeare. It’s special, comprehensible.” Benilde students are involved in the production.

In the director’s view, “classical plays are what we need today in the theater world because they are limitless, and students should be exposed to the masterpieces of the world.

“The computer generation is different, it has different values. So, it’s important to introduce this generation to literature.”

Language is another factor. “Keep in mind that we have a special culture,” Padilla said. “It has to be raised to the intellectual level for the language to grow. It’s important that we express ourselves in our language.”

Bernardo had a similar observation. “By doing plays in Tagalog,” he said, “you can get people to appreciate the language. With support from the public, mabubuhay ang pangarap (the dream will be realized).”