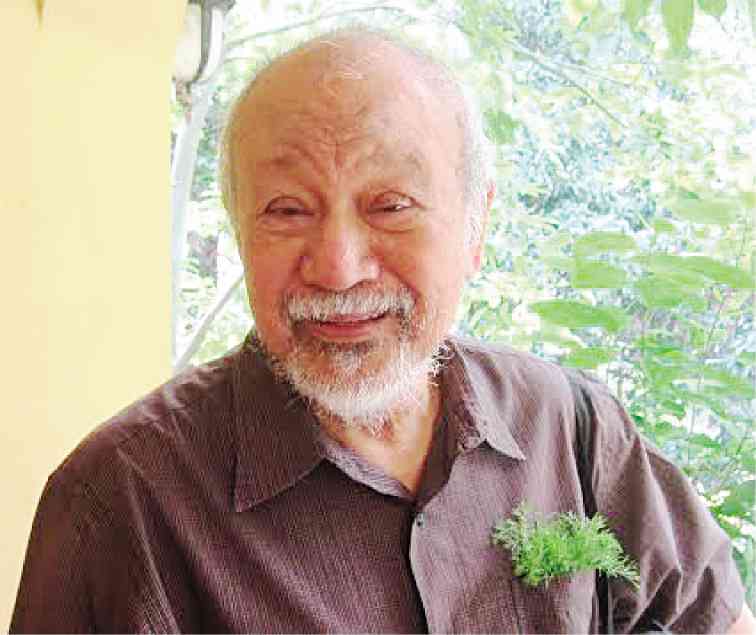 ELMER A. Ordoñez wearing a boutonniere of freshly plucked dill that he sprinkles on his rice;

Elmer Ordoñez: From the First Quarter Storm to Facebook

He seems to be putting out a new book every other year, the latest being an autobiographical novel, “Snows of Yesteryear.” The 50 copies that Solidaridad Bookshop carried sold out rapidly the afternoon of the launch a few Saturdays ago.

The only time the discussion heated up was when José, playing devil’s advocate, inquired what an essayist like Dr. Ordoñez, 85, was doing in fiction. The new novelist recalled, “Frankie (José) and I have running arguments about what fiction writing should be… I am familiar with the devices of fiction or the novel since I teach literature, but I follow my own instinct to put my story across. I am not a formalist in these matters.”

He told of how he “realized that I had not kept one promise to put out one book, a novel perhaps, that I had long procrastinated in finishing.” He had already written a collection of short fiction called “Sitting in the Moonlight and Other Stories,” published by Anvil Press.

In the foreword to that collection, Diaz rued how “it’s a pity Elmer Ordoñez wrote no more than the seven stories in this book… All of them are deeply felt and disturbing.”

Ordoñez said, “Rony (Diaz) wished that I would write a novel because these stories need more narrative space. I followed his advice. Hence, five of these stories were included as chapters in this book which has become a Bildungsroman, a novel of development with Elias, my double, as the principal character, written in two parts. I hope this book fulfills Rony’s wish that this longer work would contribute to our collective memory.”

Ordoñez, his wife Elenita, a University of the Philippines humanities professor, and their children spent years of exile from the Marcos dictatorship in Montreal, Canada. Thus, the book refers to those wintry years and his own aging and period of looking back. The phrase is from French poet Francois Villon: “Where are the snows of yesteryear?”

He described his feelings as a writer in exile: “While on the run in Malaysia with my wife’s and my canceled passports, we learned about the arrest of colleagues and students in the early months of martial law. We approached the International Red Cross representative, who was visiting the country, if he could look into the situation of political detainees. Our committee on Philippine concerns made sure that the North American public were informed about the atrocities of the dictatorship.”

In Canada, they were part of a support group that wrote about martial law’s victims and raised funds for the detainees. They heard about the heroic deaths of Lorena Barros and Emman Lacaba, the arrest of Carol Pagaduan, who helped in the UP Civil Liberties League, and Lilia Quindoza, who was in Ordoñez’s English 199 class. A number of faculty colleagues like Lumbera, Dolores Feria, Temy Rivera, Ed Villegas and others went underground or were arrested.

Ordoñez said the Cold War in the 1950s shaped him into a political writer. “One couldn’t help but be politicized in the conflict between the so-called Free World and the Communist bloc… I was one of those put under surveillance by the military intelligence, attested to by Boni Gillego, and Red-baited by some from the religious community led by a Jesuit priest.”

These forms of harassment did not stop Ordoñez from founding, along with José, Alex Hufana and Fred Bunao, a magazine called “Comment,” devoted to nationalism and academic freedom, the concerns of a small group of professors and students at the time. “The response was heartening. The atmosphere of fear of ideas and the immobility of intellectuals on campus and outside were ended. The liberal professors and students formed the Society for the Advancement of Academic Freedom. A new breed of students took up Sen. Claro M. Recto’s call for a Second Propaganda Movement. They were not intimidated by the passage of the Anti-Subversion Act passed in 1957. They rallied to protest the congressional committee hearings on suspected communists among the UP faculty in 1960. These were the student leaders who figured in the nationalist movement in the ’60s, on to the First Quarter Storm and beyond.”

It wasn’t all pamphleteering and organizing political forums. Ordoñez began a romance with Elenita, nicknamed Tita. “We met in a class in Diliman in 1950, but she transferred back to the Philippine Women’s University, where she graduated from high school. I saw her visiting a younger sister in the campus and thought of sending her a Valentine card. She replied, we met again, and I courted her. We got married in 1956.

“The following year we left for abroad. Since then we have spent some 20 years away from the country in study, teaching, exile and political work. We raised a family of one girl and two boys.”

What makes the couple’s story poignant is Tita’s struggle with and death from lung cancer. Her husband was the caregiver during the last six months of her illness. “I attended to her immediate needs, like giving her herbal cookies as painkiller and keeping up her morale, chatting with her, hugging her. My workplace was also in the same room so we were always together.”

Despite years of exile, the Ordoñezes still returned to the motherland. He said, “From the start, Elenita and I vowed that we would return once martial law ended… and return to our teaching jobs at UP. We had no plans of migrating or settling in a foreign country.”

They had no illusions that deep changes would occur after the Edsa Revolution. “We saw another set of oligarchs and traditional politicians take their place in Malacañang and in both Houses in Congress. That’s why we continued our political work in the academe and educational and cultural sectors toward social change. Elenita worked with progressive women artists and feminist groups. I devoted my time to the Education Forum, Alliance of Concerned Teachers, Pambansang Unyon ng mga Manunulat, UP Workers Union and Ibon Foundation.”

Ordoñez retired in 2001, but he has never been busier. He put together “Emergent Literature,” a collection of his literary essays, and “Diliman: Homage to the  Fifties,” another compilation of essays. He started writing short stories that were published in Philippines Free Press. In 2004 he started writing a newspaper column, “The Other View,” which focused on literature and society. From these years of meeting weekly deadlines, he put out three volumes, also titled “The Other View.”

Ordoñez remains the literary editor of the Sunday Times. “Though it has been reduced to at least one-fourth page, I continue to put out contributions from writers and readers, now largely poems and short essays. Since my wife passed away in April 2012, I turned to writing what I had long procrastinated in finishing, this autobiographical novel launched recently.”

Another book, “Red Poppies on the Road,” a memoir, awaits publication by Popular Bookstore. “It is a paean to my beloved wife, with whom I shared 56 years. It goes back in time to when I became conscious of myself as a child. Most parts of the book had been published and new parts added. The title was derived from an experience of touring Western Europe the whole month of May 1967 and seeing red poppies on the road. The image of red poppies in Flanders Field stuck in our memory.”

Since finishing two books, he said he has been “spending too much time in social media, particularly Facebook. I have started another project, a historical novel with my maternal grandfather as a main character. He was involved in the secularization movement and during the witch hunt following the GomBurZa executions by garrote in 1872.”

He rationalizes his activeness on Facebook this way: “Social media, if used judiciously, can be useful in espousing causes involving the environment, health, education, arts, and literature for social change. I occasionally interject humor since laughter is good for the health.”

This widower has chosen to live by himself with the kasambahay instead of moving in with his children. “I am a creature of habit. My wife and I had this retirement house built in the early ’90s. It would be a shame to abandon it just because my wife has gone. I don’t want to burden my children, who have their own families. Besides, I like to live with many trees and plants around the house.”

He has no secret behind his longevity, saying, “Perhaps the question may be how I have managed to live to 85. I tell my friends it must be because I take virgin coconut oil. When I first had a mild heart attack in 1999, I decided to take VCO as recommended by Dr. Conrado Dayrit. At first I used to make VCO myself using the cold press method.  Now I get it from the pharmacy. I’m not a health nut, but I read up on health tips on exercise, diet, etc. I follow advice but not fanatically. I am sometimes susceptible to temptations.”