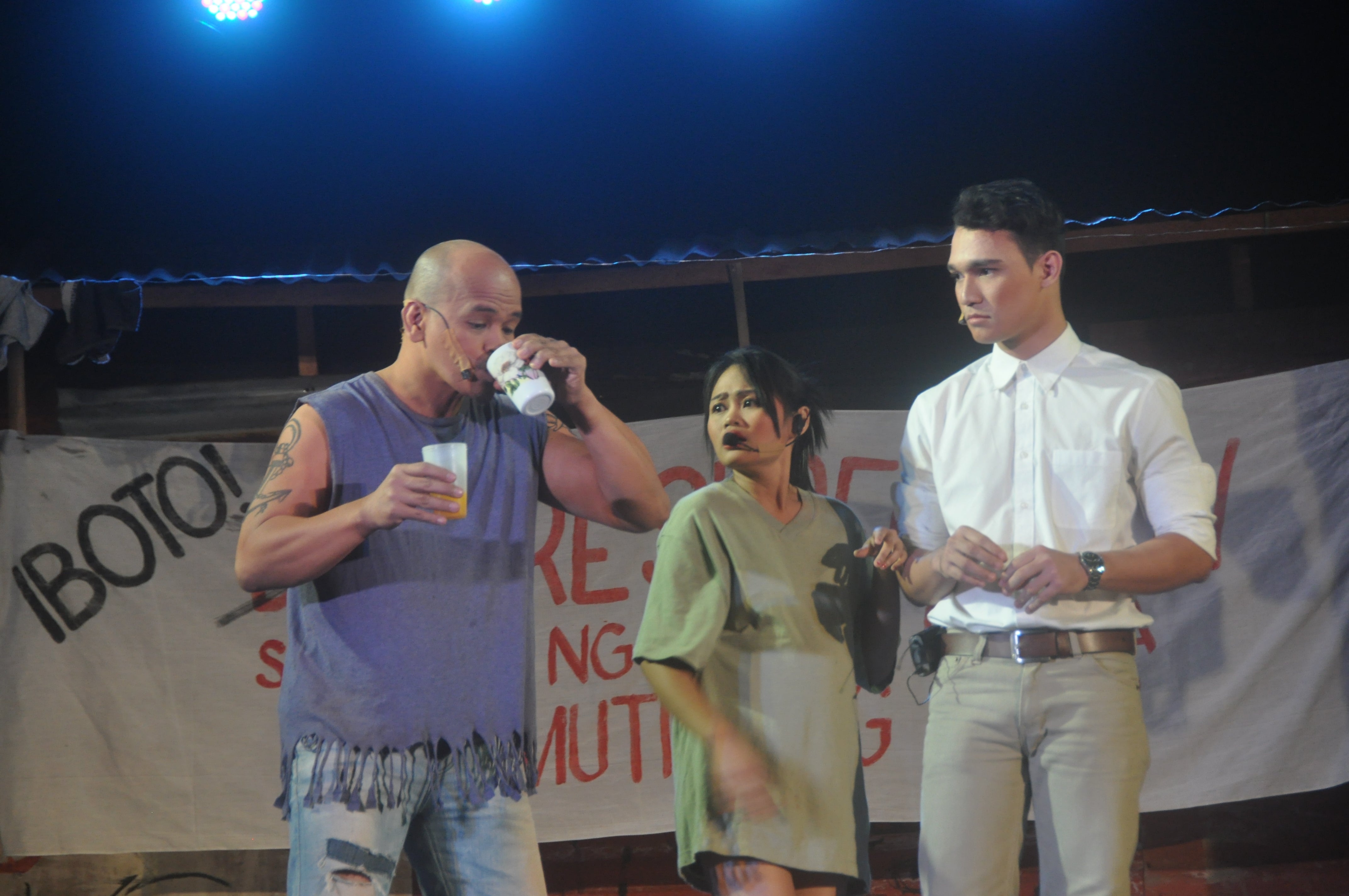 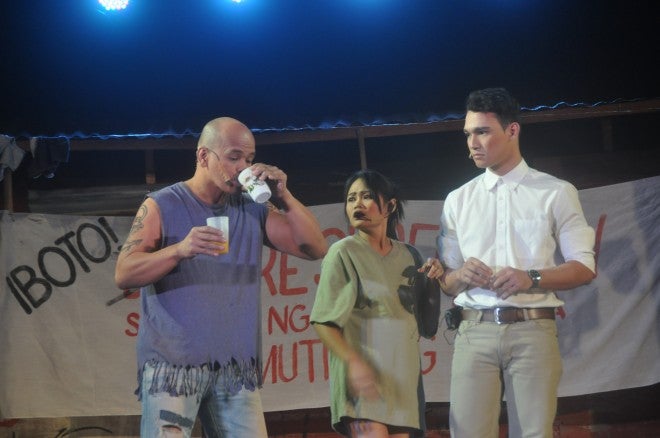 Ganito Kami Magmahal brings into the open closet stories of a triad of gay characters – Bruha, Birhen and Magdalena.

In her second grade, Bruha experiences sodomy with a sophomore escort. As the Search for Ms Intramurals is underway, he finds himself in the comfort room for his first sodomitic encounter with the escort of Ms Sophomore. In his monologue, Bruha metaphorizes sodomy as the “Lighting of the Torch”.

Birhen, a university professor who prides himself as a genius, recites from his photographic memory his story of attraction, love and sex with Joe who happens to be his student. His pride is slighted who, in spite of lavishing Joe with the comforts of life, is still abandoned by Joe.

Magdalena is wrathful witnessing his mother engages in sex with just anyone for money. His rage becomes unbearable that he runs away from home and seeks refuge in a movie house where he ends up giving oral sex to a paying customer. In the movie house, he becomes just like his mother.

Broadcasting in public these stories, which are a private matter, is not normal. Doing so may mean patronizing social misbehaviors, which may elicit disdain from people. Social norms prohibit unacceptable actions. Sodomy penetrated into a minor by another minor merits disapproval. A university professor who crosses the line that separates him from his student for sexual motivation deserves the corresponding amount of punishment. Moreover, a movie house turning into a brothel should not be operational.

The attempt of DUNGAW to present the play in an academic community is indicative of the company’s chutzpa. Certainly, this results from the awareness that theater communicates social realities. These realities of high charge of shock value may go beyond the threshold of tolerance of people, but they must be given a platform for expression so that people will have a truthful view of life.

The tragic strain in Doc Res

The flaws of Doc Jess Resureccion become clear when his cousin, Pogi, kills him at the end of the play.

First, Jess refuses to go to the wake of his father, and uses time and ambition as his arguments. He reasons that the workload of a medical student deprives him of time for domestic duty. Pogi believes that Jess violates his familial obligation. Second, Jess convinces Pogi to withdraw his candidacy for Mayor. He thinks that Pogi’s candidacy is just a ploy of the incumbent Mayor to lessen his votes as the cousins are both Resureccion. Third, Jess fails to acknowledge in public his consanguinity with Pogi’s mother. He argues that it was not his intention to be oblivious of the blood relation as he is preoccupied with the matters of the election. Fourth, when Jess was pursuing his medical degree, he underpaid Elsa for her sexual service. 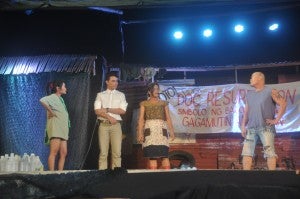 Consequently, the flaws of Jess create cohesion among Pogi, Elsa and Pogi’s parents to devise a scheme of killing Jess. To strategize this ploy, they act out roles. Pogi and Elsa have to be petulant. They have to sustain their unloving verbal tassels. Pogi’s father has to sprawl himself on the boat to display his intoxication and deterioration. Pogi’s mother should remain unscathed to look sincere with her invitation to Jess to have meal with them.

The role-playing of Elsa, Pogi and his parents carries sub-textual significations. The mouthing of Pogi and Elsa is an attempt to cause Jess hearing impairment so he loses an auditory sense of an impending doom. The view of an ailing and intoxicated uncle aims to blur Jess’ vision so he does not see the blood flow. The concoction of Pogi’s mother attempts to ruin the olfactory sense of Jess so he does not smell his tragic end.

The ruse in the play unfolds a poor man’s version of a courtroom where justice is not rooted in universal legal laws but in specific domestic rules. In this courtroom, excessively arrogant individuals who have turned their backs against their roots are trialed. When their arguments seem weak, they are sentenced to death, and those who exact the punishment are the marginalized who were once their blood relations.

Looking at the dramatic actions through the Oedipal eyes gives us a different perspective.

The absence of Jess at the wake of his father is not self-willed but institution-dictated. It is the domino effect of the exercise of power of the medical school over its students. Jess needs to subject himself to such power in order to earn his degree.

Fully cognizant of the corruption of the incumbent Mayor, Jess decides to run for Mayor. He is motivated to fight this social ill to alleviate the lives of the poor. However, the current Mayor who is motivated to preserve power manipulated Pogi to run for the same position. Jess is aware of this political tactic. To counter this, he convinces Pogi to withdraw the candidacy. This, of course, is part of the brave attempt of quelling evil ruling over the town.

Jess does not acknowledge in public his blood relation to Pogi’s mother. This arouses contempt from her, an indication of parochialism. Jess could not afford to be parochial as serving larger community demands liberal thinking. The parochial culture ends up favoring a small group, thus neglecting the general interests.

Jess becomes scornful for underpaying Elsa in the past. The issue of underpayment, however, has to be looked at using the lens of prostitution, which is not legal in the Philippine context. After the sexual act between two consenting adults, there is no point asking for a just compensation in such kind of operation.

The dramatic tension brought about by the conflict of two different ideologies, that of Pogi and of Jess, scaffolds the tragic strain of the play. It is this tension that causes the chasm between two groups of people – the supporters of Jess and the sympathizers of Pogi.

Elmer Rufo as director-stage designer uses aesthetics dictated by the internal nuances in the plays.

In Ganito Kami Magmahal, pictorial composition of actors who are aligned downstage looks flat. The frontal orientation of their body positions contributes to the lack in texture. In theatre, the assessment of the effectiveness of these visual cues requires a full understanding of the text. With the absence of hierarchy among the characters, the flatness in blocking becomes a meaningful part of the whole aesthetics.

The spatial relations of the actors are well calculated and well maintained to preserve personal zones. This approach is text-based as the play dramatizes alienation.

In Doc Resureccion, Rufo designs a set that realistically shows the microcosmic world of those in the periphery. The details of the structure – materials, condition and age – are an authentication of the way of life of the poor.

Against this set, the actors behave according to their character. Pogi’s manners emanate from his obsession with his wife, from his fluvial dependence, and from his animosity towards his cousin. Jess’ communicative skills are in consonance with his high learning and his political ambition. Elsa waddles well to entice Pogi. Pang exhibits convincingly an alcohol-triggered deterioration. Mang speaks with a gift of gab, which is a trait of a market vendor.

The aesthetics are not dictates of superimpositions, which happen when interpretation goes beyond the framework of the text. They function as one organic whole.