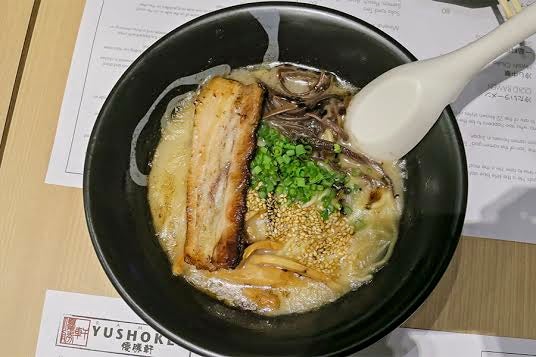 Time was when someone said “ramen,” I would think of hot instant noodles in Styrofoam cups eaten in the wee hours while cramming for an exam back in college.

Fortunately, over the years, my knowledge and appreciation of the famous Japanese comfort food have grown. In fact I learned that noodles-in-hot-soup did not originate in Japan. It was Chinese tradesmen visiting Japan who introduced noodles in the 19th century.

So, what makes a good bowl of ramen?

As any true ramen chef would tell you, it starts with a rich, deep-flavored broth—the soul of the dish. Ramen is categorized according to its particular soup base, although nowadays there are variations.

As for the noodles, most ramen houses make theirs from buckwheat and flour. Different ramen houses use different types of noodles based on what they are serving.

Some prefer using thin noodles for Tonkotsu; others use thick ones for Shio or Shoyu.

There is no hard and fast rule. Some ask the diners for their own preference.

But what they do in common is serve the noodles a bit undercooked so they can expand and soften once mixed with the broth.

Finally, the toppings. While ramen can be served with just the broth and noodles, most come with an array of toppings, such as vegetables, seaweed, soft-boiled egg and chasu (braised pork belly). Chicken and seafood are also used.

(READ: How to eat ramen, according to the Ramen King)

Today, from the Kyushu-style Tonkotsu-based ramen to the modern Miso and the simple Shoyu or soy-based broth, we have seen a wave of ramen houses opening the past years, and more are expected to open.

Here are some worth visiting:

In terms of taste you will find few that rival the intense flavor of Tonkotsu produced by Elbert Cuenca and his partners at Ramen Yushoken.

The place serves traditional Shio, Shoyu and Miso ramen, but if you are more adventurous, the Tantanmen is a great spicy alternative, while the Tsukomen (dipping ramen) is offered in four variations. The basic Tonkotsu is a winner.

Hanamaruken, founded in Osaka by Takaku Arakawa, serves a Tonkotsu broth-based ramen that uses slow-braised, soft-bone pork rib instead of chasu. The servings are quite filling, and the pork rib portion is generous.

Its signature dish is aptly named after what its founder describes as “happiness in a bowl.”

This famous ramen house from Fukuoka has Hakata-style Shiromaru Motoaji ramen for that classic Tonkotsu flavor, or the Karaka-Men for its spicier version. Diners have options from the noodles to toppings, such as soft-boiled egg to additional chasu.

Try the Tsukumen (dipping ramen) in which the noodles and broth are served separately. But, as with all things ramen, you must eat fast before it gets cold.

Best known for its Double Cheese Tsukemen, Mitsuyado gives a modern twist to the flavor of a traditional Japanese dish.

The Tantanmen—only 20 bowls are served each day—is one of the best and most sought-after in town.

If you are looking for a good Shio-based ramen, this is the place to go.

Ramen Santouka, originally from Hokkaido, owes its flavor to the manner of cooking which allows everything to simmer, from the pork bones to the fixings. The contents are added slowly one by one, without letting the broth boil.

Get an extra order of Toriniku Char-Siu (pork cheek) to go with your bowl.

Kitchitora has set itself apart with its Paitan Chicken-based broth. Don’t be deceived by the lightness of its broth—it packs a lot of flavor.

The Paitan Zenbu no Se is its bestseller—basic Paitan Chicken ramen, with pork (or chicken) chasu, nori, egg and garlic oil for that enhanced flavor. You can order the plain Paitan Zenbu.

Its famous Butao Ramen is rich in flavor, but what’s nice about Ramen Nagi is the do-it-yourself menu—choose your soup flavor, noodle texture and toppings.

Diners at Butamaru (“buta” is pig in Japanese) like its strong flavored Tonkotsu (though still not as flavorful as its neighbor in Molito). It has a limited menu, but you go to Butamaru only for the ramen which comes in four types: Shio, Shoyu, Miso and Tantanmen.

Kenji Tei’s Shoyu ramen is a good option if you want noodles with a balance of tangy and salty flavors. But you can also try its Spicy Negi Miso if you want a spicy kick.

Ramen Bar is the place for something basic and quick with hearty servings, though the flavors are a bit light for my taste. Its soy-based Tonkotsu ramen is the bestseller.

Kuroda serves basic ramen choices, all Tonkotsu-based. If the traditional ramen is too bland for you, there are garlic or spicy alternatives. What is great is that you are given a free bowl of noodles with every order.

Originally from Singapore, Tampopo is for those craving both ramen and Tonkatsu. Its specialty is Black Pig ramen.

A little unorthodox, this place is exactly what its name says. Traditional chefs would probably go crazy if they see what Wrong Ramen put into some of the items on its menu.

If you know of a ramen place worth visiting, e-mail [email protected]