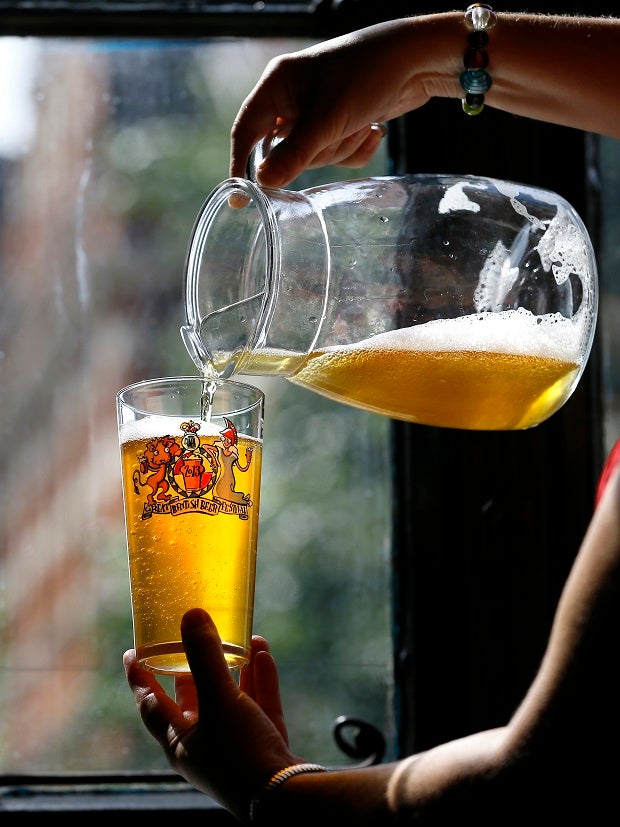 FILE- This is a Tuesday, Aug. 13, 2013 file photo of a volunteer pours beer during a tasting session at the Great British Beer Festival in London. The World Health Organization say were eating too much sugar and should slash our intake to just 5 to 10 percent of our overall calories. The guidelines were released Wednesday March 4, 2015, after a year of consultation. The recommendations are focused on added sugars in food and those in honey, syrups and fruit juices. The advice does not apply to naturally occurring sugar in fruits, vegetables and milk. (AP Photo/Kirsty Wigglesworth, File)

UN: World eating too much sugar; cut to 5-10 percent of diet

LONDON, United Kingdom — New guidelines from the World Health Organization are enough to kill anyone’s sugar high. The U.N. health agency says the world is eating too much sugar and people should slash their intake to just six to 12 teaspoons per day — an amount that could be exceeded with a single can of soda.

So, put down that doughnut. And while you’re at it, skip the breakfast cereal, fruit juice, beer and ketchup.

The guidelines, released Wednesday, finalize draft advice first released last year and are focused on the added sugars in processed food, as well as those in honey, syrups and fruit juices. The advice does not apply to naturally occurring sugars in fruit, vegetables and milk, since those come with essential nutrients.

“We have solid evidence that keeping intake of (added) sugars to less than 10 percent of total energy intake reduces the risk of overweight, obesity and tooth decay,” Francesco Branca, director of WHO’s nutrition department, said in a statement.

Experts have long railed about the dangers of sugar and studies suggest that people who eat large amounts of the sweet stuff are at higher risk of dying prematurely from heart problems, diabetes and cancer, among other conditions.

To meet the lower threshold set by the new guidelines, Americans, Europeans and others in the West would have to slash their average sugar intake by about two-thirds.

Americans get about 13 percent of their calories from added sugar, or 268 calories a day, the equivalent of about 18 teaspoons. One teaspoon of sugar is about 15 calories. In Europe, sugar intake ranges from about 7 percent in Hungary and Norway, to 17 percent in Britain to nearly 25 percent in Portugal.

Some experts said the 10 percent target was more realistic for Western countries than the lower target. They said the 5 percent of daily calories figure was aimed mostly at developing countries, where dental hygiene isn’t good enough to prevent cavities, which can lead to serious health problems.

Last month, a U.S. government advisory committee recommended that sugar be limited to 10 percent of daily calories, marking the first time the U.S. has called for a limit on added sugars. The Agriculture and Health and Human Services departments will take those recommendations into account when writing the final guidelines, due by the end of the year.

WHO had previously suggested an upper limit for sugar consumption of around 10 percent, but issued the 5 percent guidance based on the presumed additional health benefits from cutting intake even further, though it said it had no solid evidence to support that.

“To get down to 5 percent, you wouldn’t even be allowed to have orange juice,” said Tom Sanders, a professor of nutrition and dietetics at King’s College London who wasn’t part of the WHO guidelines.

He said it shouldn’t be that difficult for most Europeans, Americans and others in the developed world to get their sugar intake to 10 percent of their diet if they limit things like sugary drinks, cereals, beer, cookies and candy.

“Cake is lovely, but it’s a treat,” Sanders said.

The Sugar Association slammed the new recommendations, arguing the advice was based on “poor quality, weak and inconsistent data.” It noted WHO itself acknowledged the evidence for the 5 percent target was “very low quality.”

The International Council of Beverages Associations echoed those concerns and said beverage makers can help people cut back on sugar through smaller portion sizes, as well as no- and low-calorie drinks and providing nutritional information on labels.

Coca-Cola, for example, has been more aggressively marketing its “mini cans” and has launched a reduced-calorie version of its namesake soda called Coca-Cola Life that’s sweetened with a mix of sugar and stevia, a natural sweetener. Companies have also been working on new technologies to reduce sugar. Senomyx, based in California, makes ingredients that interact with taste receptors to block or amplify sweetness. They have no taste or smell and are listed as artificial flavors.

Last year, the U.S. proposed new nutrition labels that would be required to list any sugars added by manufacturers.

Sugar is just one of a number of ingredients that have come under attack, such as salt and trans fat. However, WHO pointed out that when it comes to sugar, most people don’t realize how much they’re eating because it’s often hidden in processed foods not considered sweet. For example, one tablespoon of ketchup has about 4 grams (1 teaspoon) of sugar and a single can of soda has up to 40 grams (10 teaspoons).

“The trouble is, we really do like sugar in a lot of things,” said Kieran Clarke of the University of Oxford, who said the global taste for sugar bordered on an addiction. “Even if you are not just eating lollies and candy, you are probably eating a fair amount of sugar.”

Clarke noted that there’s added sugar even in pasta sauces and bran cereals. She said fruit juices and smoothies were common dietary offenders, because they have very concentrated amounts of sugar without the fiber benefits that come with eating the actual fruit.

Clarke welcomed the new WHO guidelines but said people should also consider getting more exercise to balance out their sweet tooths.

“If you do enough exercise, you can eat almost anything,” she said. “But it’s very hard to avoid large amounts of sugar unless all you’re eating is fruits and vegetables.”