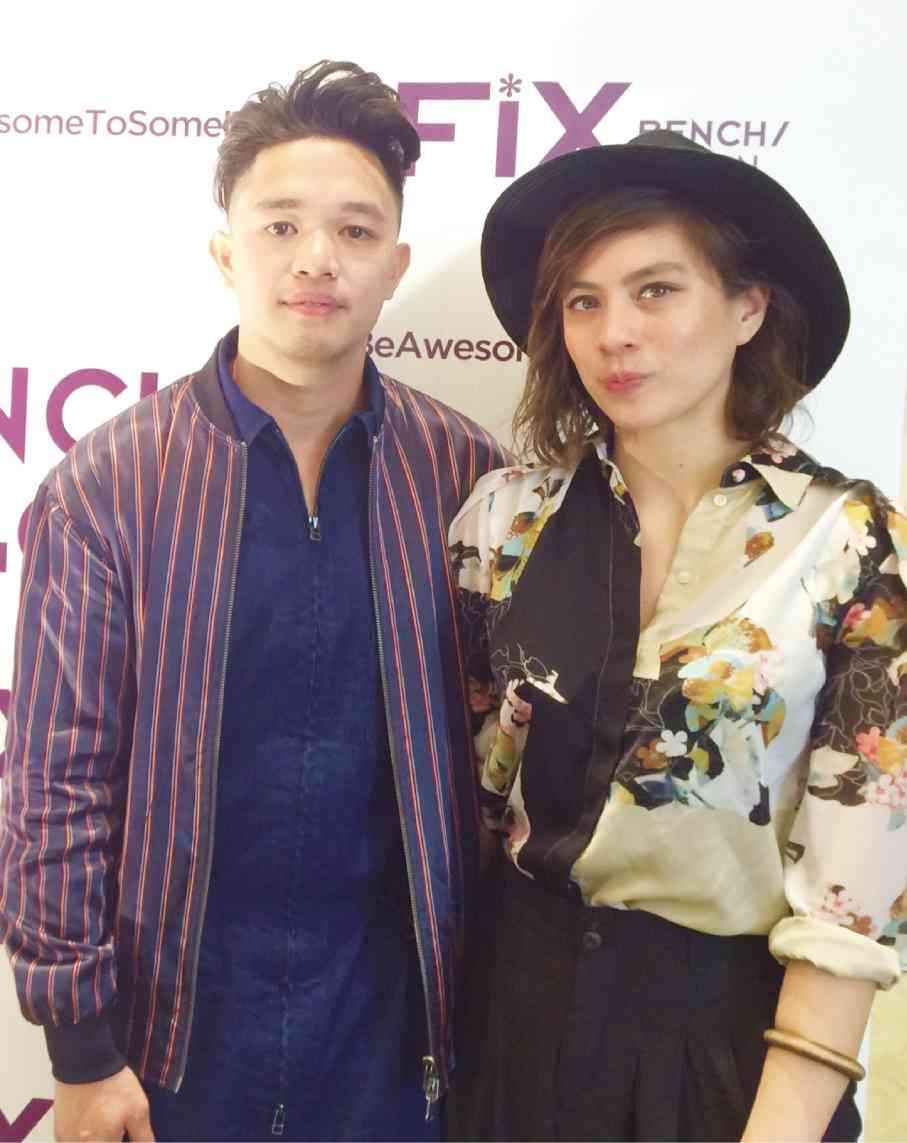 “IT’S hard for me to enjoy being in another country without giving back just a little bit,” says Mark Bustos, with girlfriend Lala Javier, whose late dad was also from Pampanga. CHECHE V. MORAL

MANILA, Philippines–There’s not a hint of weariness, only quiet equanimity, when Mark Bustos says they haven’t had a day off in the week and a half that he and his friends have been in the Philippines. They haven’t gone to the beach, the typical destination of many a balikbayan.

But Bustos isn’t your typical balikbayan. The young man, who made news—CNN, New York Times—last year for his singular act of kindness to the homeless of New York City, is back in the town where his parents grew up, to impart that same kind of charity to his cabalen: a free haircut to those who can’t afford one.

This time, the celebrity hairdresser brought with him friends, including his girlfriend, hairdressers all, to help him in his movement. Since their arrival, Bustos and company have been giving haircuts mostly to children living in dumpsites and squatters’ areas in Macabebe and Masantol, Pampanga—the hometowns of Bustos’ parents.

As shown in his Instagram photos, they have been doing this exactly as Bustos does it in New York: frills-free, with just a chair and his scissors, right there in his “clients’” locale. This time, it’s amid a sea of garbage and makeshift homes that would make a desolate park bench or a plastic crate on a pavement in frigid New York (a common setup) seem like a king’s throne by comparison.

“It’s different,” Bustos says with sadness in his voice. “In the provinces here, you see children who are very, very poor. In New York you don’t see many [poor] children on the streets. But in the Philippines, no matter what situation they’re in, these people are just happy. Sometimes in America, some people just try to make you feel sorry for them. I can’t say that about everybody, because there are a lot of people who really want to make a change in their lives. But here, whatever situation they’re in, people are just happy.”

“If they don’t want a haircut, we have care packages for them. Or we just sit with them and have a meaningful conversation. To be able to walk away and know that you’ve put a smile on their face, it means a lot,” he says.

As anyone familiar with Bustos’ story knows by now, his advocacy began on a visit to the country in 2012. Born in New York and raised in New Jersey, he came to visit with his girlfriend, Lala Javier, a Filipino-Mexican-American whose late dad was also from Pampanga, already with the intention of “giving back.”

They rented a barber’s chair where Javier’s dad used to get haircuts; people lined up; and “that light bulb clicked,” Bustos says. “I realized how rewarding that feeling was.”

When they went home, he started going around New York on Sundays, his only day off: “No matter where I go, I always bring my scissors with me.”

He began sharing his activities on Instagram with the hashtag #BeAwesomeToSomebody, and has amassed 228,000 followers to date. Inspired friends have joined his project.

On Thursday, he held a seminar for hairdressers of Bench FIX Salon at Market! Market! The same hairdressers will be with him on a charity activity today, March 6, at the Tahanang Walang Hagdanan, a home for persons with disabilities.

This is Bustos’ first-ever charity activity organized with another entity. In Pampanga, he has been doing things on his own, careful not to tell anybody of his next move.

“I don’t get bothered, I get to do what I need to do, it’s better for me. I don’t like to make a big production,” he says.

He has had to turn down “99 percent” of requests from all over the world to collaborate with him.

But the Bench owners have become personal friends that he just can’t say no to. Last year, Bustos met Bench founder Ben Chan and Miguel Pastor through New York fashion designer Phillip Lim, their common friend and his client, whose hair he cuts “every four days.” The two New Yorkers traveled together to Manila to watch the Bench “Naked Truth” show.

On that trip, Bustos says he experienced a side of the Philippines that he never gets to see, because the country he knew was only the poverty he had seen in the province.

“It worked out perfectly that we were planning a trip here and they (Bench) wanted to do this together,” says Bustos. “I don’t believe in coincidences. God had a plan.”

After Bench, he will also do a charity event with his aunt, who owns a salon in BF Parañaque.

This man’s kind heart and magnanimity stems from the example of his benevolent upbringing.

“I learned on this trip through my auntie in Pampanga that my parents have been giving back a lot as well, and they never tell me stuff like that. There’s a small elementary school adjacent to the home where my mother grew up. As it turns out, my mom and her brothers and sisters have been donating money to keep that school running, for 6-7 years now. Every year, they have a relief effort in San Nicolas where they give away care packages.”

His parents are most proud of his activities, even as Bustos is embarrassed by all the attention.

“My dad says he feels rich that I’m able to do this… I’ll never get used to the attention. It was never my intention to seek attention… Every once in a while you’ll hear something negative from people who really haven’t looked into the whole background of the story, of the movement.”

He shrugs, and adds with a smile: “You can’t really please everybody all the time. It’s okay.”

His work is its own reward, Bustos says.

“Honestly, it’s just about being able to put a smile on somebody’s face, and knowing that you’re not gonna get any money from it,” he says. “Money isn’t everything. Money is nothing. If you think about how big this universe is, how small the earth is, and how small the country is, and how small we are—we are just tiny, little specks in this universe, so why are we so hungry for money? Why are we so hungry for things that we really don’t need?”

Bustos works at a tony salon with famous clients like fashion designers Mark Badgley and James Mischka, Nascar driver Jeff Gordon, as well as CEOs and New York honchos. He started cutting hair at age 14, with no objection from his parents. The young man, however, went on to earn a degree in business management to prepare for his long-term goal of one day owning a salon.

Shortly before graduation, his dad inquired when he was planning to go to hair school.

“I went to college because I thought that would make my parents happy. But they actually encouraged me to get my hairdressing license. When dad said that, I thought I should’ve just gone to hair school,” he says with a laugh.

A person’s stature in life is immaterial to this young man.

And when his work is done here, count on it that on that day off, yes, Bustos and friends will make time for the beach, finally.