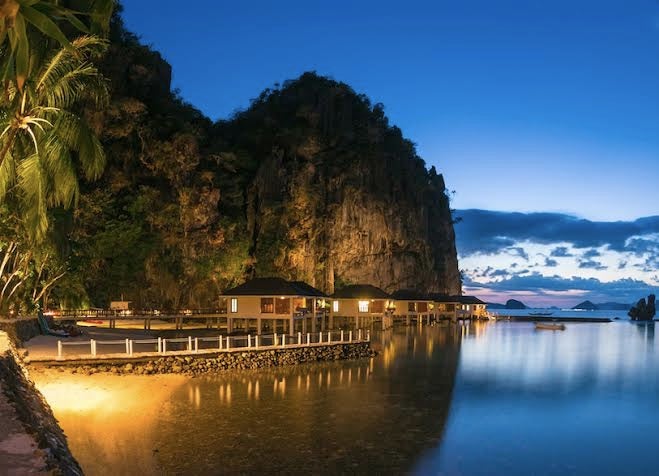 More fun on the islands: An El Nido summer

Time seems to stop amid such uncontrived beauty, miles away from the busy streets of the city.

Though it’s been roughly 32 years since Miniloc Island was established as a dive camp before it became one of four showcases of El Nido Resorts, continuous efforts to preserve its natural landscape have kept it progressive to this day. Improvements on the cottages show a more modern aesthetic while retaining its trademark rustic charm.

As Miniloc is nestled amid limestone cliffs and the Big and Small Lagoons, which are always tourist attractions, guests are invited to kayak around the island and snorkel alongside jacks and hundreds of damsel fish, fusiliers, and other colorful fishes that are hard to find in one spot alone.

As one redhead tourist—whom I bumped into during my stay—concluded, “I’ve never seen so much marine life in one spot, and I live in Australia.”

Aside from Miniloc Island, El Nido has three more eco-resorts—Apulit, Lagen, and Pangulasian—each island offering its own charm and a sense of community that’s felt the moment you set foot.

This unique solidarity is reflected by the locals’ genuine hospitality. As you’re handed welcome drinks and greeted by the staff singing a local tune, you’re made to feel at home.

Those in search of an eco-adventure can head to Apulit Island in Taytay, Northern Palawan. Aside from its white sand beach lined with tall coconut palm trees, the resort has an abundance of wildlife and tropical fishes.

You can swim with blue spotted rays, baby black tip sharks and green sea turtles in the island’s Stingray Garden.

It also offers guests a 60-meter limestone cliff for rappelling, giving a breathtaking view of the cove.

For an unforgettable view of the El Nido sunset, Lagen Island is your best bet. Having a nightcap at the water cottage’s veranda overlooking Bacuit Bay would be a great way to unwind.

Surrounded by a lagoon and a lush four-hectare forest, the resort is also a sanctuary for various birds and mammals that are easily spotted around the island.

If your idea of a vacation is an exceedingly luxurious yet still eco-friendly stay, Pangulasian, also known as the “Island of the Sun” in Bacuit Bay, offers world-class amenities and villas that conveniently allow you to either step straight onto the white sand beach or take a dip in your own lounge pool.

The villas are spacious and elegantly designed, giving guests a great deal of privacy and a sense of exclusivity.

All four resorts offer exciting activities such as snorkeling, scuba diving, kayaking, windsurfing, island hopping, and a tour of the lagoons.

Primarily known for stressing the importance of sustainability, El Nido Resorts educates not only its personnel but also its visitors on what each resort has to offer, and the steps they should take to preserve nature.

Guests are provided eco-friendly water bottles and bags in each room, allowing them to do their share, no matter how small, of caring for the environment.

Before getting a good night’s rest, on your bed you’ll find some reading materials of stories of the wildlife and marine life found in the resort or local tales passed on from generation to generation.

This conscious effort to maintain green practices is even more discernible as you admire fascinating sites such as St. Joseph’s Cave, which boasts an entrance shaped like a saint and seven chambers; the Big Lagoon with its emerald-color waters; the Small Lagoon which is enclosed by towering marble walls; and, of course, the unsullied marine life you can survey through snorkeling or scuba diving—no surprise there, as El Nido Resorts is operated by Ten Knots Development Corp., which was founded by diving enthusiasts.

Romantic dinners and gatherings are made even more special in such private spots as Entalula Island Beach Club, Snake Island (an “s”-shaped sandbar), and Pinasil Island, which has a cathedral-like cavern.

All menus offered are also in keeping with El Nido Resorts’ advocacy, with salad greens coming from its own gardens. El Nido Resorts also has its tilapia fish pen and does not serve endangered species such as groupers and sea bass.

As testament to its strong commitment to sustainability, El Nido Resorts has received numerous awards such as “Destination of the Year” from Asia CEO Awards, “Sustainable Hotel” from Hotel Investment Conference Asia Pacific, and “Asia’s Responsible Tourism” from World Travel Awards.