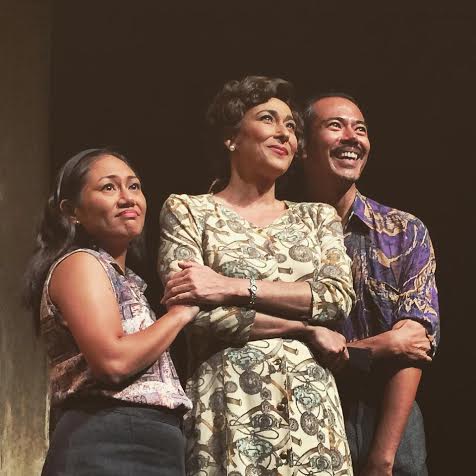 Nobody seems to be listening to me,” bewails Kane (Kiki Baento), the former orphan-turned-housemaid of the once affluent Jardeleza family, which owns land planted with i (fire trees) in 1970s Negros Occidental, but is now on the verge of bankruptcy.

When she voices out her lament, Kane is not alone on the stage; beside her are the family’s other servants, Lingling (Divine Grace Aucina) and Pindot (Lao Rodriguez), who are oblivious to her personal confessions while they cavort with and tease each other.

Beyond the fourth wall, meanwhile, the audience is all ears, enraptured by the servant’s alternately sad and funny story about how she eventually finds herself in an estate that is about to lose its place in the sun.

That throwaway moment seems to capture both the grandness and intimacy of Peta’s “Arbol de Fuego,” Rody Vera’s splendid adaptation of Anton Chekhov’s “The Cherry Orchard,” the classic play about the decline of the Russian aristocracy and its replacement by a more boisterous, entrepreneurial, rags-to-riches middle class, many of them former serfs to the upper classes.

Vera’s translation transports this tale to Negros Occidental in the martial law era, a time when former sugar barons like the fictional Jardelezas get squeezed by newly minted oligarchs under the new regime and the opening of economic trade barriers. In that particular time and place, the chic custom was to send well-off kids to Europe for vacation or study. To Madrid, for instance, as in the case of the Jardeleza matriarch Enriquetta Jardeleza-Sofronio (Cherie Gil), who now returns from her lengthy European sojourn to an estate about to be sold off to pay for the family’s mounting debts.

The Jardelezas are the formerly super rich who have lived off the largesse of their land, forgetting to acquire the skills, or at least some kind of education, that would have allowed them to survive with the changing times. They splurge like there is no tomorrow and hold elaborate parties even as their ancestral property is about to go on the auction block. At the same time, they are all too aware of the massive, life-changing loss they are facing; here, the continuing cries of “Wala nang kuwalta” are repetitively painful.

Yet the Jardelezas are, in their own way, sympathetic and endearing. There is none of the “matapobreng Kastila” stereotype whipping the life out of their serfs. They genuinely care for their servants who have lived with the family for decades and are considered part of their extended clan.

Charito (Angeli Bayani), the mayordoma, is the Señora’s adopted daughter. The almost senile Manong Ikong (Bembol Roco), who practically raised the Señora and her brother Adjie (Jake Macapagal) from childhood, acts as the doting grandfather. Despite her dwindling finances, and up to the desperate end, the Señora still tries to find a way to secure the futures of those who have served her family all their lives.

Throughout the nearly three-hour performance of this slice-of-life drama, the audience is captivated by the rousing combination of an ensemble of actors who make their characters breathe, and the poignant relevance that Vera’s adaptation brings to the script. Chekhov’s story of an embattled upper class family who loses simply because they cannot cope with change acquires a powerful local color that is hard to forget.

Gil dominates the play as the still fabulous matriarch—charismatic, compassionate but ultimately unable to deal with crisis. In her Enriquetta lies the plight of the embattled aristocracy as she rejects the idea of cutting down her precious fire trees to rent out the estate and thus save themselves from penury. At the same time, Gil does not overwhelm; though she is the fulcrum that holds the ensemble together, she does not eclipse them with her performance and presence, but allows the other actors to shine in their individual moments.

And there are a lot of characters in this play, each one a familiar face in Philippine society: Nonoy (Raffy Tejada), the budding businessman who finally outmaneuvers his former masters; the nouveau riche hanger-on Caloy (Anthony Falcon); Dante (Riki Benedicto), the intellectual who desires to challenge the status quo but cannot seem to man up on his own; Chitong (Leo Rialp), the old gentleman also forced to sell off his properties to survive; and Nina (Anna Luna), the estate’s last heir who, ironically, seems to be the only one ready to survive and thrive in the brave new world because she is courageous enough to let go of the old.

Vera’s script allows us to see these characters and how they react to the cataclysmic changes surrounding them. Moreover, he lets us see how the causes and viewpoints they represent clash with or complement each other.

Nonoy’s work ethic and individualism cannot stand Dante’s egalitarian convictions. Charito, on the other hand, must contend with her and Nonoy’s love for each other that, for one reason or the other, is never able to complete itself. The Señora, meanwhile, is torn between admiration for her former serf, Nonoy, while fending off her own subconscious fears about the rising social class he embodies.

Such social viewpoints and personalities make a whirl on the stage—a dance that is certainly worth a second and third look.

But this is where Loy Arcenas’ direction falters a bit. In the same way that Kane’s friends pay him no attention, the characters—despite the actors’ wonderful individual performances—do not quite cohere into a vital whole onstage. There is very little strong emotional or relational hold among them, because everything seems to move too fast, too soon.

Emotions turn at a dime. Before the pathos of one line is able to hit home, the next statement makes light of the same situation, blunting the impact of the whole scene. Characters come, speak and go, the resonance of their moments blurring into the next. At times the play comes off as individual dance movements unable to coalesce into a seamless whole.

Fortunately, the depth of Vera’s script and each actor’s sterling performance carry the play through.