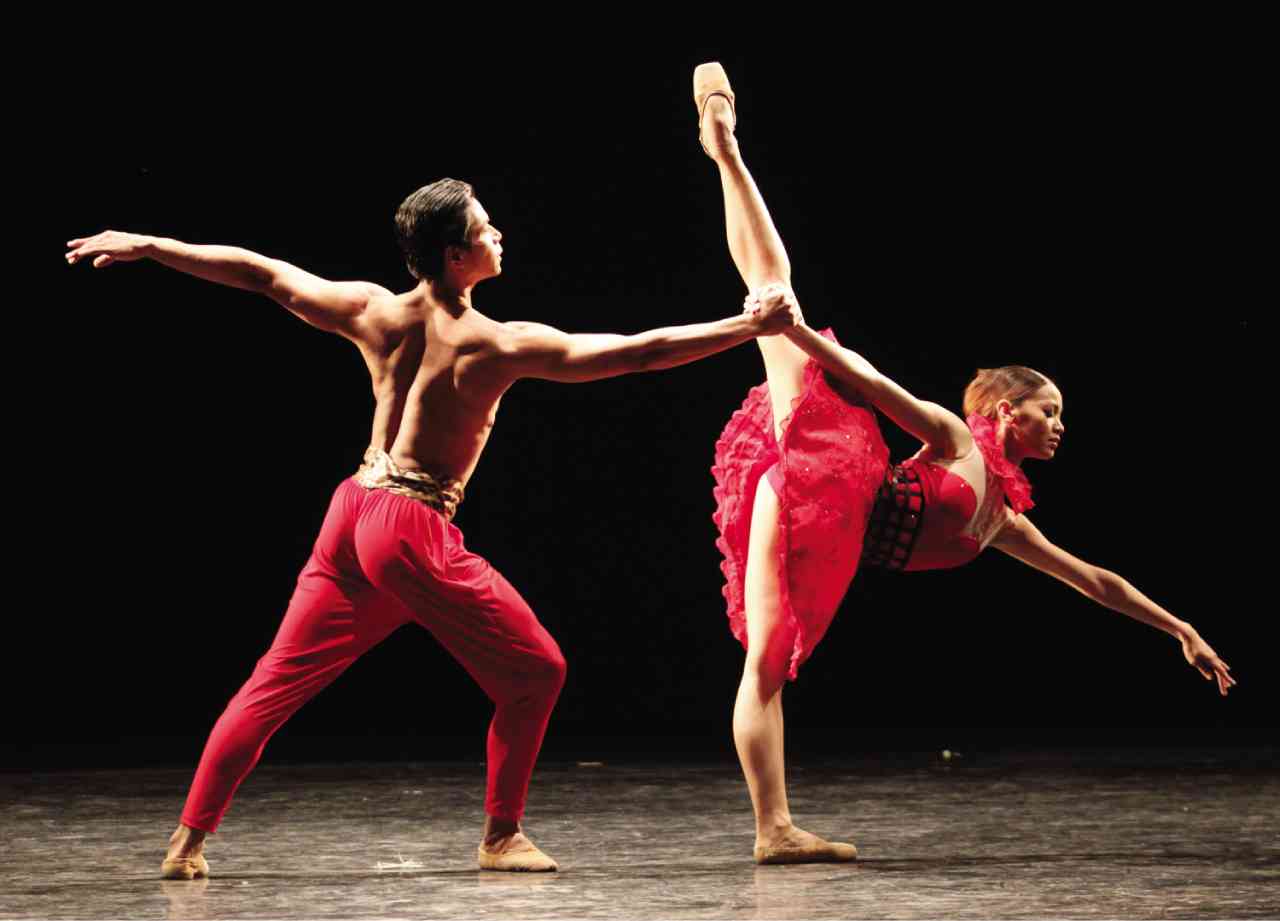 Ballet Manila steps up in its 20th anniversary performance

Twenty years ago, Ballet Manila (BM), then a breakaway group from another company, debuted to an overeager audience that kept clapping and cheering “Bravo!” even before the number was over.

There were 12 young dancers with powerful technique, who molded themselves after their mentors Lisa Macuja-Elizalde and Osias Barroso. Although their Russian style of dancing was impressive and crowd-pleasing, BM’s all-classic repertoire was cloying and stodgy. It was like being in Russia before glasnost and perestroika.

Today, BM is positioning itself as a global company with a repertoire of diverse perspectives from foreign guest choreographers, teachers and artists. Its recent anniversary concert, “BM 2.0: The 20th Anniversary,” was a compact program that represented the various genres from classic to pop that appealed to audiences.

Showing its international flavor, the concert opened with “Paquita: Grand Pas de Deux” in all its imperial glory. What was truly memorable was

the impeccable ensemble work, a result of hours of coaching from Russian ballet mistress Natalia Raldugina. The clockwork precision and angles of the group formations, the uniformly perfect pitch of the head and twist of shoulders, and the partnering were impressive. Give the corps time to mature so that they could bring out the saucy Spanish flair.

The lead couple were both imports—the long-limbed and striking Abigail Oliviero, a Singaporean-Australian, and Brian Williamson, who was a fittingly tall and attractive cavalier.

BM alumna Christine Rocas and partner Rory Hohenstein, both from the Joffrey Ballet, showed the different qualities of their pas de deux. Krzysztof Pastor’s “The Balcony Scene from Romeo and Juliet” had the expected rapt partnering and impassioned charge.

However, all the uninhibited motions didn’t seem to match the dramatic impetus of Sergei Prokofiev’s music. Instead of getting carried away with romance, one ended up admiring Rocas’ graceful silhouette stretched to the extreme. The duet ended with a predictable and disappointingly tame kiss.

Yet, it took artistry, chemistry between two dancers, and a lot of stage devouring to make this pas de deux enjoyable. Hohenstein’s emotional intensity and rebounding jumps were a

While “Romeo and Juliet” was all passion, Christopher Wheeldon’s meditative “After the Rain” left the audience in a hush. The transcendent score, “Mirror in Mirror” by Arvo Pärt, was the impetus for the choreography’s “stillness in motion.”

Resonating with the minimalist and repetitive strains from the piano and violin, the couple plotted the course of a relationship marked by delicacy, fervor, sadness, disconnection and spiritual connection. Like the mood of the piece, the couple projected the contradictory qualities of earthiness and weightlessness. They responded to each other spontaneously yet moved in the same breath. Rocas’ projected lyricism was like a flowing stream of motion. Her vulnerability was a match to Hohenstein’s sensitivity.

“Bloom,” a piece made for the company by Belgian-Columbian choreographer Annabelle Lopez Ochoa, was a Westerner’s perspective of Asian culture. She was moved by the devotional rituals in Bali, Indonesia. Philip Glass’ “Violin Concerto,” with its mesmerizing passages, dynamic crescendos and virtuosic violin solos, inspired her references to the energetic flow of martial arts, and the structured neoclassical arrangements of duets and leg work.

The work played with the contrasts of delicacy and power like yin and yang. The men took to Oriental martial arts strikes and lunges while the woman danced with circular movements of the upper body, characteristic of European contemporary dance. Clad in tutus, neck ruffs and pointe shoes, the ladies executed balletic movements such as beaten jumps and bourrées, quick gliding movements. The only drawback about BM’s regulation pointe shoes was that these didn’t allow the dancers to completely let go.

Nonetheless, “Bloom” was hypnotic. The jewel in BM’s crown, principal Dawna Mangahas swung from profoundly ethereal to earthy sensual. Her partner Mark Sumaylo exuded powerful stage presence, a rarity nowadays in today’s generation of danseurs. If he wasn’t such a strong partner with subtle magnetism, he would have just been a human barre to her. The male ensemble was no less macho.

Dancer-choreographer Gerardo Francisco’s “Tara Let’s” was a welcome breather after all the serious numbers. The company, dressed in bright-colored attire, alluded to popular dance

forms. Loosening up, they all came together like an unexpectedly arranged party.

Barroso’s choreography showed the development of the dancer from a highly-structured class to the stage in the finale “Ecole.” Set to Carl Czerny’s grand music, it was a showcase of BM’s uncompromising standards as shown by the young scholars and competition veterans. One wouldn’t think that the young dancers were plucked from the slums with their regal bearing.

The female corps de ballet did their double pirouettes in unison while the male ensemble’s aerial turns landed in clear positions. Credit should go to their teachers.

Although “Ecole” would have been more suitable for an opener, BM chose to end the program with a statement that it’s the company to beat. We dare say it has eclipsed the more established companies with its high technical standards and a substantial and current repertoire.

Yet, BM could still develop artistry and improve its overall production design.