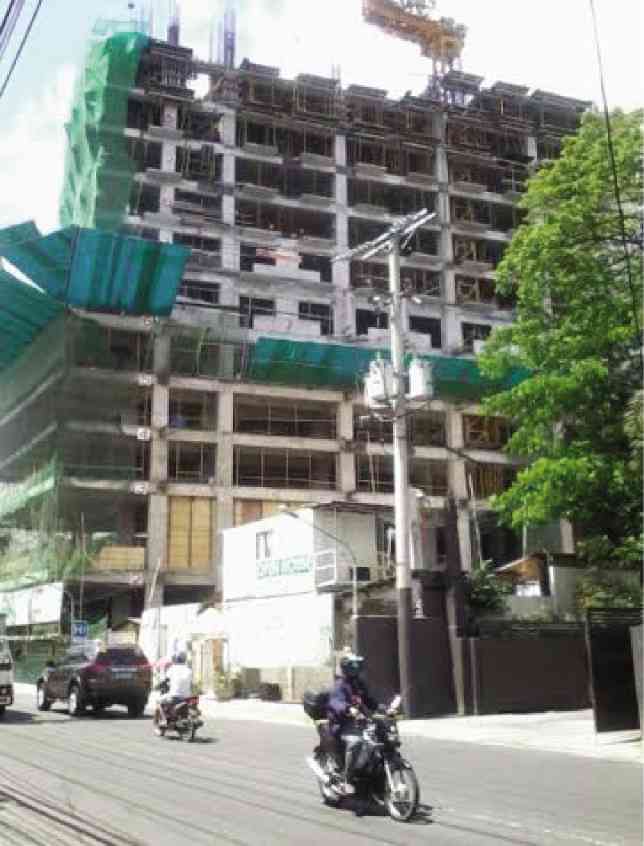 CONSTRUCTION of the controversial condominium project in full swing

Heritage advocates criticized anew national cultural agencies and the Manila city government for allowing the construction of a high-rise condominium in Sta. Ana district, a declared histo-cultural overlay zone and a heritage zone.

The 30-story project, its critics have said, is now on its 11th floor and once completed, will likely dwarf the surroundings, including the centuries-old Our Lady of the Abandoned Church, or Santa Ana church.

De Leon denounced the National Historical Commission of the Philippines (NHCP) for clearing the construction despite a 2014 declaration by the national government of Santa Ana district as a heritage zone.

She explained that a historical marker that had been installed by the old National Historical Institute, predecessor of NHCP, in 1939

recognized the Jesuit residence La Ignaciana, where the condominium is now being constructed.

De Leon also hit the National Museum (NM) for clearing the condominium’s developer, CDC Holdings, Inc., even if conditions set by NM were “not followed.”

She said these conditions include the developer submitting itself to NM monitoring and to meeting with Sahta. Another condition was for any planned structure to comply with community requirements.

De Leon criticized the national cultural agencies, including the National Commission for Culture and the Arts (NCCA) for allegedly being “weak” and for lack of political and transparency.

She added that the NCCA, NM and NHCP are uncoordinated and often resort to “finger-pointing” when heritage controversies arise.

“[He is] not doing anything toward saving the cultural heritage of Sta. Ana as (he has) promised which is his duty anyway,” said de Leon.

De Leon’s mother, the 103-year-old Jessie Lichauco, a long time Sta. Ana resident who lives in a heritage house near the controversial project, also voiced out her opposition to the construction of the high-rise condominium.

“They should not continue it,” she said.

“To me, I think we’re making a huge mistake building all these high-rise buildings,” Lichauco said.

“I think in every country, we need a bit of history,” she explained. “This is an old place. We should keep a [living] museum of what the country used to be.”

In an open letter, another Santa Ana resident slammed the local government for allowing the construction of the residential complex.

“What kind of power does the (developer) have over the city government and other higher authorities (for the latter to) tolerate all the violations being made?” asked resident Isabelle Villanueva.

Villanueva said the local and national permits given to the developer and contractor “ignore” the heritage zone area rules of Santa Ana.

She noted that new construction is supposed to be limited to 10 floors since Sta. Ana is a declared heritage zone.

“Everybody thinks they could get away with the law,” she noted.

In a previous statement, CDC Holdings legal counsel Marco Bautista said the company has “complied and secured all necessary permits and clearances.”

“We are confident that we will be able to deliver the recommendations made by the National Museum as well as uphold the company’s commitment to its buyers,” he said.