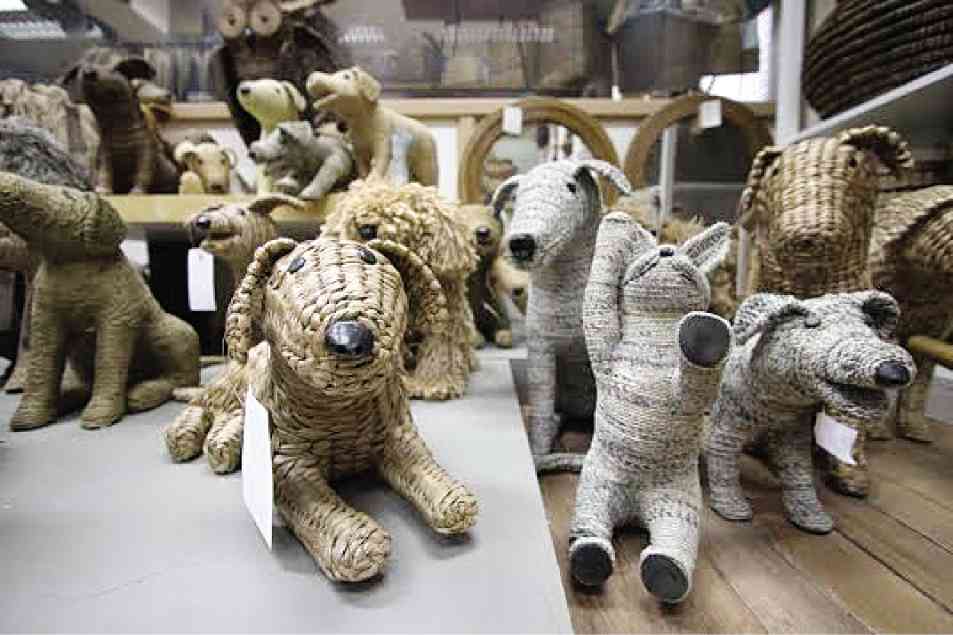 NOVELTY items like woven animals are a hit among foreigners.

Innovation is key to this furniture shop’s success

If there’s one thing that will set Calfurn apart from other exhibitors in the Philippine International Furniture Show on March 13-16 at the SMX Convention Center, it’s the ability to produce furniture pieces showcasing “a thousand and one weaves.”

“Our materials range from rattan to sea grass, leather to synthetic materials,” said Erdy Feliciano, CEO of Calfurn. “Weaving is mostly done by hand. If ever we use machines, we always incorporate it with handwoven elements.”

Established in Pampanga in 1976, Calfurn started small, catering exclusively to the local market, including US servicemen from Clark and Subic.

Its designs then were mostly replicas that customers asked to copy from interior design magazines. One such piece, which later caught the attention of Bloomingdale’s buyers, was dubbed the Fessler chair.

Named after one of its early customers, a certain Sergeant Fessler, the piece gave Calfurn the opportunity to break into the international market; Feliciano realized that if his shop’s products could attract Bloomingdale’s, these deserved to be seen by the rest of the world.

“It inspired us to innovate and produce more original pieces that would appeal to international buyers,” said Feliciano, a CPA and the youngest among Calfurn’s seven original incorporators.

The company has expanded over the decades, and now has 400 regular employees in a sprawling 14-hectare facility in Angeles.

One of its biggest clients is the Williams Sonoma group, the American company behind Pottery Barn. It also does exclusive furniture and accessory lines for Crate & Barrel and Restoration Hardware.

“Eighty percent of what we produce goes to the United States,” said Feliciano. “The rest end up in Asia, Australia, Europe and the Middle East.”

The company also has a growing local clientele of homeowners and interior designers from Metro Manila who regularly go to its Pampanga showroom.

Before the American recession of 2008, the company used to employ over 5,000 subcontractors from all over Pampanga and certain towns in Pangasinan. Calfurn’s subcontractors is now down to 2,000. It was also forced to temporarily decommission a number of factories.

But it continues to grow these days, though at a slower pace. “We’re still feeling the effects up to now,” said Feliciano. “Putting up a showroom in Manila isn’t a priority. Our main objective is to recapture our pre-recession market.”

A major factor in Calfurn’s success and longevity is research and development (R&D). Apart from improving on existing practices, its in-house craftsmen are encouraged to develop and acquire new techniques.

“To this day, I’m amazed at the different kinds of weaving they come up with,” said Feliciano. “I attribute this to our big and dynamic R&D team whose mandate is to continuously come up with new products.”

Innovation and reinvention are directly linked to the company’s growth and very existence. A major customer like Pottery Barn, whose business goes through the cycle of four seasons, surely won’t be content with products with just variations of the same look.

“Since Pottery Barn requires us to develop a new line per season, we do a new one four times a year,” said Feliciano. “By the following year, we’re again expected to come up with four new lines. That’s why our product development is continuous.”

At the same time, it has also kept a few key collections that have become classic pieces. But instead of merely reissuing bestsellers like its sea grass collection, Calfurn’s in-house designers come up with ways to tweak them.

“Sometimes we don’t change the shape of a piece at all, and instead expand it by introducing an entire line,” said Feliciano.

Its ability to seamlessly marry indigenous materials such as rattan, abaca and plantation-species wood, such as mahogany and gmelina, with modern steel frames and treatments has also been richly rewarded.

At first glance, its multilevel showroom seems cluttered. But it’s actually the result of a rich inventory of products now in the thousands. “Oh my God,” said Feliciano, “don’t ask me how many. I seem to have lost count.”

And that number is likely to increase as the company braces itself for more orders, as the US economy springs back to life. There will always be a market for beautiful, labor-intensive, handwoven products, and Calfurn is willing and able to cater to that demand.